Your TV may be wreaking havoc on your diet. Watching any old show on the tube while simultaneously snacking can contribute to extra poundage, and new research suggests that food shows in particular (looking at you, Paula Deen) can have an effect, too.

A study published in the journal Appetite found that viewers who watch cooking shows for recipe instruction or inspiration are more at risk than those who watch with no intention to cook the meals at home (as well as those who do not watch at all). To conduct the study, researchers asked 501 women, aged 20 to 35, about the sources they used to get information about new foods and how often they cooked from scratch. The women also reported their own heights and weights.

Participants who reported watching food programs and cooking from scratch weighed an average of 10 more pounds, with a higher BMI, than those who claimed to obtain their food news offscreen, like from friends, magazine and cooking classes. "Food TV should be a viewing experience only, not a cooking experience," said Lizzy Pope, Assistant Professor at the University of Vermont and the study's lead author.

Mixing food with TV is not the only treacherous habit. The study also uncovered a link between higher BMI and women who sought out information about food through social media. "It could be that seeing photos of 'perfect,' often rich foods your friends post on Facebook, Twitter or Instagram makes it seem like their unhealthy eating patterns are the norm," Pope said. 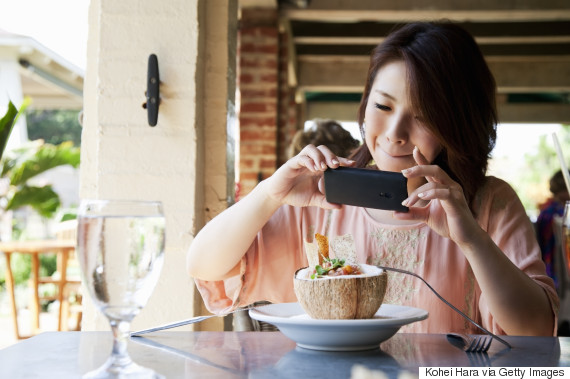 If anything, Americans are blurring the lines between food and media more than ever before: Consider the #FoodPorn hashtag, which floods Instagram feeds. It currently boasts nearly 50 million posts. Restaurants have suffered from the increase in customers snapping photos of their plates and apologists stand by the act of Instagramming brunch. Perhaps posting more photos of leafy greens and fewer snapshots of In-N-Out Burgers could have a reverse effect.


Awesome Recipes That Happen To Be Healthy
More:
healthy livingweight gainDietDiet And Nutrition
Newsletter Sign Up
An essential daily guide to achieving the good life
Subscribe to our lifestyle email.
Successfully Subscribed!
Realness delivered to your inbox