"3/20. 10 a.m - 3 p.m. Kids. Food. Fun." That was the text message I received from Sqirl Preserves maven, Jessica Koslow, asking me do a cooking class with some overachieving juniors and seniors from Oakwood School. Naturally, I replied, "I'm in," without knowing what was really expected of me, and with little to no teaching experience whatsoever. I'll attribute my answer to my new life philosophy (inspired mostly by the great James Franco) which pushes me to pursue things I would not normally pursue and to accept all offers to be involved with stuff; a philosophy which emphasizes doing, as opposed to perfecting. Teaching would be a challenge though. By nature, I am horrible at collaboration. My MO is usually to sit alone and tinker with an idea until it's perfect in my mind, at which point its relevance has most likely passed. I envision myself as Dear Leader and run my kitchen with an iron fist. My staff responds with laughter and sighs. Still, I try.

I opened the class by confessing to the students that I had no idea why I'd actually been chosen. After all, Oakwood's food immersion program is about locavorism, eating healthy and generally being fancy young adults, while what I do involves bathing pork butt in condensed milk, buying supplies at the bodega and using canned jackfruit for salads. In short, my process is just about the complete opposite from Sqirl's philosophy, and the curriculum of the class. Though if there was one thing I felt I could impart on these kids, it was that being a chef, at least a chef of my ilk, consists of mostly unglamorous manual labor that does not fit into the paradigm of the contemporary chef. Looking back, I wish I had printed copies of the classic Gabrielle Hamilton essay from Food & Wine in 2001, "A Rogue Chef Tells All,"which ends with the line, "So tonight I will have to do something very unfashionable and un-cheflike: I will cook."

The first task I presented the students with was to make "som tum," or papaya salad, the traditional way -- in a terra cotta mortar, pounded with a wooden pestle. I divided them up into groups and had them peel, shred and chop. Then they all gathered around the mortar as one student started pounding the garlic, while another would assist by adding each of the remaining ingredients one at a time.

I told them that a good approximation is fish sauce and lime juice in equal proportions, but maybe a little more palm sugar. But the cardinal rule in Thai cooking is to taste and adjust. I taught the students to taste, think about what the dish needed, and add more of that ingredient. Learning a "correct" palate is probably the most difficult aspect of trying to tackle a cuisine that's foreign to you.

We decided the som tum was too sweet, so we added more lime juice. I made the point of saying that the order in which you add the ingredients is paramount in Thai cooking. For example, if you add the Bird's Eye Chile in the very beginning, the peppers will bruise more heavily, and more of the "spicy stuff" will be released into the salad. But if you add it at the end, the scuds will stay relatively intact, which means that it's only spicy if you bite into it.

We grilled up some Isan (Northeastern Thai) sour sausage, which is fermented, and some Chieng Rai (Northern Thai) herb sausage on a George Foreman grill, and heated up some coconut milk-seasoned sticky rice in a microwave (which I had brought with me, since Jess would never use such a thing).

After lunch, I explained that for dessert, we would have a Thai ice cream sandwich. That's basically ice cream inside a piece of bread, with varying toppings. In Thailand, the bread that is used is super-thin, white sandwich bread with zero nutritional value, like Wonder Bread but thinner, and that this was one of those cases in Thai cooking where using a premium ingredient (like, say, artisanal, handmade bread) doesn't necessarily make the finished product better. In other words, you shouldn't be afraid to cook and eat foods that some people would find pedestrian if you think they're delicious. That's why I used pan de leche from the corner store, which is a nice LA twist on the traditional Thai sliced bread.

A lot of times, teachers will claim they learned just as much from the students as they felt the students learned from them. I wouldn't go that far. But I would like to give a shout out to my favorite of the bunch: Max, Ella, JC, Jon and Evan.

PHOTO GALLERY
Look, Mom! I'm a f-cking teacher! (A shitty recap of my day with some Oakwood students)
Download
Calling all HuffPost superfans!
Sign up for membership to become a founding member and help shape HuffPost's next chapter
Join HuffPost 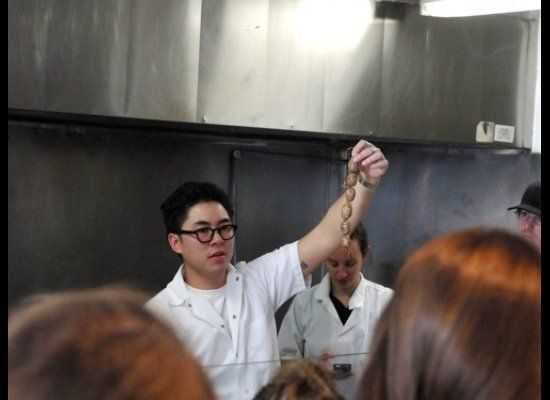 1 / 9
Chef Kris shows off his sausage
Chef Kris shows the students a strand of Isan sour sausage. Sqirl Preserves' very own Jessica Koslow can be seen texting in the background.