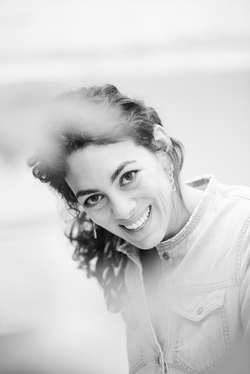 Close your eyes for one moment and think back to your childhood.

Chances are that one of the first memories that springs to your mind is a certain taste from your past. You know what I'm talking about. It could be the pancakes your mom would make every Sunday morning; that roast your grandma would prepare for all special holidays; or that hot chocolate which only your favorite uncle could ever seem to get "chocolaty" enough!

Alexandra Stratou took her own memories and turned them into the inspiration for a delicious culinary journey, one she's inviting everyone to partake in with her first cookbook, Cooking To Share.

To accomplish the writing of this book timing was everything; as was turning a seemingly disadvantageous situation into an advantage; making lemonade out of lemons, so to speak. "I was working at a food website but because of the crisis (in Greece) it shut down. I found myself unemployed and wanting to do something." The second reason was familial. "My cousin had a baby," she says with a smile. "I wanted to preserve our family recipes. Thankfully, my family's longtime, elderly cook, Mrs. Loula, who had learned how to cook from my great-grandma, was still alive at the time." Mrs. Loula's cooking helped raise three generations of Alexandra's family and she herself was more of a family member than an employee. 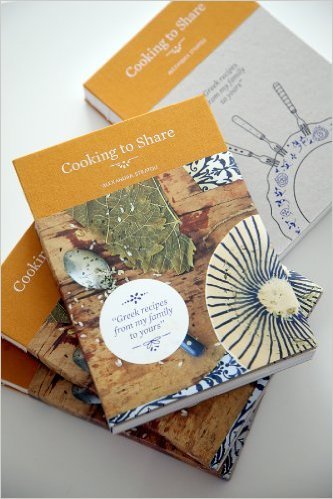 One simple thumbing through of Cooking To Share's carefully thought out pages and a reader can almost smell the buttery phyllo dough of a Spanakopita as it crinkles and turns golden brown while baking in the oven as well as taste the mouthwatering freshness of a tomato in Alexandra's version of scrambled eggs.

"This book is very personal," Alexandra says. "The motivations behind writing it didn't have anything to do with commercialism. I genuinely wanted to collect the recipes I grew up with." In truth, the book's tagline, "Greek recipes from my family to yours," sets the tone and one truly does feel as if they've been given an invitation to a private family dinner. Alexandra says that, "During the writing of the book, it was where I was at that moment, I don't think I could write it exactly like this again."

Alexandra initially funded her cookbook's production through a 2013 KickStarter campaign. "Turning to KickStarter was a great decision," she says. The one thing she'd change about the way she went about the campaign? "I was definitely overambitious in terms of time and set goals that were unattainable," she says. Having launched the campaign in March she announced that the book would be ready in September... but she'd yet to write a single word! The book was finally ready in December. 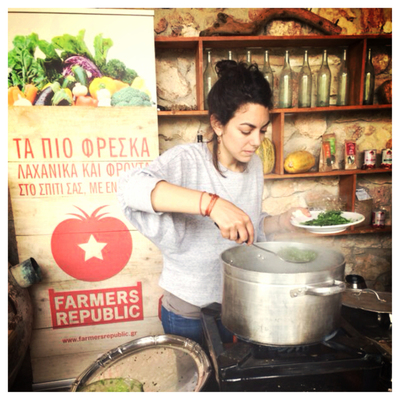 "This book changed my life," she shares. It also proved to her parents that deciding to work in a restaurant after 4 years of university wasn't a crazy decision. In fact, she was drawn to the culinary arts so much so that she returned to learning and attended a two year, intensive cooking school in Spain.

Regarding my inquiry as to why she believes that people's cultural identities have such a close connection to the culinary arts: "Food builds a personal culture above national borders," she says. "Although my book has Greek recipes, what it really shows is the personal culture I grew up with which includes sitting and relating to people, especially family. I believe that families who don't eat together don't share a personal culture."

Granted, this is a beautifully crafted and thought-out cookbook. Personally, I'm inspired every time I thumb though its pages and find the book so lovely that it's actually taken up residence on my living room coffee table instead of the kitchen shelf!

However, there are a lot of cookbooks "out there." What's the one thing that Alexandra hopes people will gain from Cooking To Share? "I hope people feel the beauty I see in people sharing a meal. For me that's one of the most essential things. That they will take a moment to revisit their own family food culture, their own memories," she says and then laughs. "Obviously, I'd like people to make a good Greek meal. I'd be thrilled if they make a meal from my book and say it was the best they've ever had!"

Have you guys tried her Spanakopita?