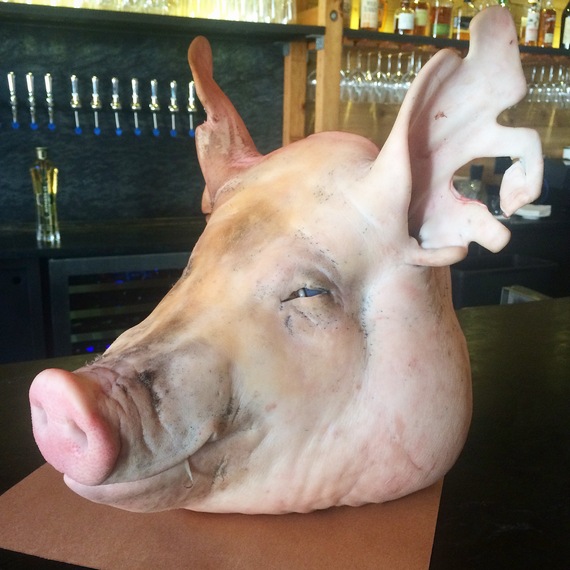 Food Republic's column Ask Your Butcher seeks to answer FAQs in the world of butchery. Ethically minded butcher Bryan Mayer founded Philadelphia's Kensington Quarters and helped develop a renowned butcher-training program at Brooklyn's Fleisher's. Today, he consults with farmers, chefs, butchers and anyone else who will listen. In each column, Mayer tackles a pressing issue facing both meat buyers and home cooks. This week, Mayer is really on top of his game. And by top, we mean the head.

Over the past few weeks, we've been talking a lot about cooking and utilizing the overlooked bits of meat. I hesitate to call them the odd bits, as I hope you've started to appreciate that there's nothing really odd about them. Rich in flavor and packed with nutrients, these parts are healthy and -- I believe -- necessary for a balanced diet. Now, we've clearly been "heading" in a certain direction, and while we've covered quite a few underutilized parts, there's one in particular that we've left off. It's sort of the Swiss Army knife of edible parts: the head! You've got meat packed inside all those crevices, cheeks and, depending on the animal, jowls. You've got bones with all those essential nutrients. And last but certainly not least, you've got offal: tongues, sometimes skin, eyes and brains! The latter two contain lots of DHA, an omega-3 that has a range of profound health benefits.

Now before we get started, we need to address the 800-pound cow in the room -- BSE (bovine spongiform encephalopathy), more commonly known as mad cow disease. This is a degenerative disease that affects the brain and spinal cord, most often, of adult cattle. And unlike a report that was just issued (ahem, WHO/IARC), the CDC has determined that there is not only strong epidemiological evidence, but also laboratory evidence, of a causal association between BSE and a variant of Creutzfeldt-Jakob disease, an illness that can occur in humans.

That's all scary stuff on its own, and when you add on the fact that scientists aren't exactly sure how this disease came to be, you've got the makings of some fantastical headlines. But rest easy knowing that this has occurred only four times in the United States since 2003, and as an eater of grass-fed beef, sheep and goats, you have almost no chance of eating an animal that has consumed animal protein, one of the presumed causes. Once again, as you've heard me say many times: Know your farmer and know your butcher. 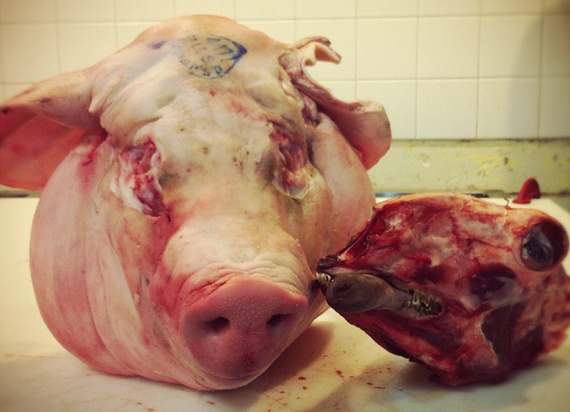 You can consume the head of pretty much any animal, but I'm going to focus on three that are fairly easy to get: pig, sheep or goat, and beef. Your local whole-animal butcher shop should almost always have the first three on hand. But again, since almost none of us have been looking for these things for quite some time, they might have found alternative uses.

My friends at the Meat Hook Sandwich Shop in Brooklyn have a sandwich appropriately named Pig Face. I highly recommend it. Out west in Denver, Western Daughters is smoking heads, picking the meat off and making some incredible rillettes (I'll show you a quick and easy way to do them soon). So make sure you call a-head (sorry) of time and reserve what you need. You'll also want it as close to delivery day as possible, as they are highly perishable. 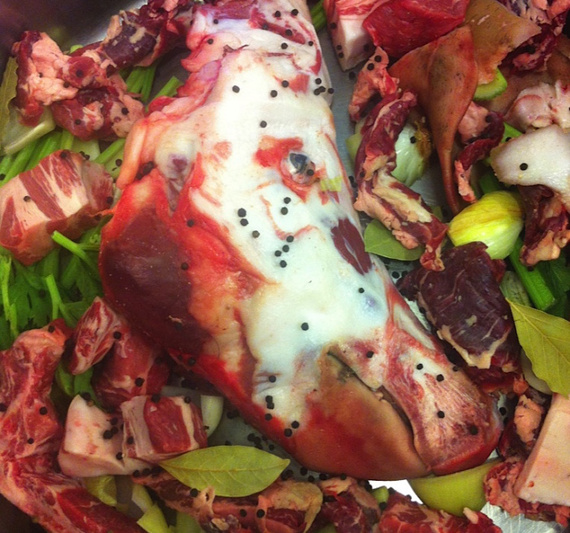 It's extremely easy to keep coming back to pig. And if eating an animal's head has you feeling a bit squeamish, pig is probably the best place to start. Sure, you could salt and season it and toss it in a 275°-300°F oven for about four hours. We're looking for an internal temp of around 185°F for that meat to start to pull. Crank up the temperature to about 500°F for the last 20-30 minutes to attain crispy skin. If the ears are getting a little too crispy, you can always wrap them in some foil. That's it - it's that easy.

You don't need to go all Au Pied de Cochon on it by stuffing a lobster in its mouth and blanketing it in a béchamel sauce, though you'd certainly get some serious cred in my book. But why not class it up a bit while helping out your head-wary friends? Let's make some head cheese. Now despite what the name may suggest, this product contains absolutely no cheese. However, the aforementioned Pig Face sandwich does have a slice of Swiss, so it's not outside the realm of possibility. My colleagues and I have attempted, several times, a rebranding if you will. Something that rolls off the tongue like the French fromage de tête, the Dutch preskop, the German sülze or even the English brawn. Oh, well, you know what they say: A head cheese by any other name would taste just as sweet.

There's very little that you need to prepare this: a head, a pot, a loaf pan, some wax paper and spices. That's it. 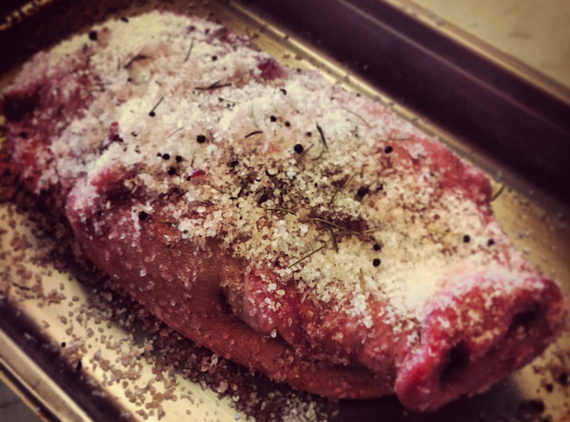 If you want to brine, no problem -- it'll only add more flavor. Simply take your head and trotters and place them in roughly a gallon of water with one cup of salt and ½ cup of brown sugar dissolved. Let it sit overnight in your fridge. A simpler solution to brining is to rub the head with some salt and herbs and allow it to sit overnight in your fridge. Place the head, herbs, wine and vinegar in a large pot. Bring to a boil and then simmer for several hours (no less than three). You'll know it's done when the meat pulls easily, the tongue is fork-tender and the jawbone detaches easily from the skull.

Carefully remove the head and trotters from the pot, allow to cool and begin to pick the meat off. Carefully dice and chop the meat, paying attention not to include any cartilage or bone. Strain your braising liquid, return to a simmer and reduce your liquid by half.

Hot tip! To test your liquid to see if it gels, simply spoon a bit onto a plate and place into your fridge. It should gel easily. If not, reduce a bit more, but be careful as you can overdo it. We're looking for solid, but not rubber-ball solid.

Line your loaf pan with some wax paper, or go commando like I do (a simple knife along the edge when it has finally set is usually all you need to pop it out). Pack your diced meat into the pan, then pour your braising liquid over the top. Allow it to set a bit and then lightly tap on the counter surface to allow the liquid to evenly distribute. Place a piece of wax paper on top and allow to cool in your fridge overnight. All that's left is to pop it out, slice about ½ inch thick and enjoy with some whole grain mustard. 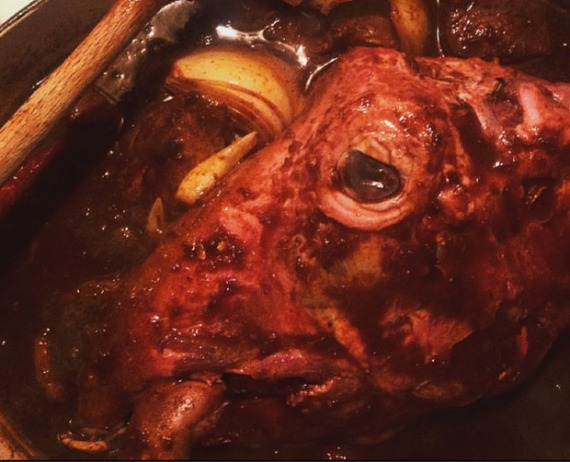 Back in my Brooklyn days, goat's head soup meant one thing to me -- a great Rolling Stones record that was the follow-up to one of the most incredible, Exile on Main Street. What insurmountable odds one must overcome to put out something that undoubtedly (and most likely) could have sucked. So with the help of a friend, and a store we affectionately called the Food Fortress, I was introduced to another goat's head soup.

I had been in there many times, but for some reason I had never noticed the open freezers, sitting in the middle of the floor, toward the back. A quick peek and wipe of the frost-covered bags revealed the heads we were looking for. If you haven't already noticed, I'm trying to keep this simple, as I realize I'm already asking you to consume a head. Water, spices and, of course, the head, and you've got something special. Yes, just like the head cheese above, leave the head intact, and everything will render into the stock and fortify with way more nutrients. I like to brown the head first, as it'll add to the richness and color. We improvised, as some of the ingredients for what's known as Mannish Water -- the traditional Jamaican goat's head soup -- are not always readily available.

Ingredients
1 goat's head (or lamb, if not available)
1½ pounds yams (or any other starchy tuber you can get ahold of)
½ pound carrots
½ pound turnips (or beets)
1 bunch scallions, chopped
2 peppers (a poblano or jalapeño on the lower side of the heat index, or a ghost pepper or scotch bonnet on the high)
A few sprigs of thyme
Salt to taste

Toss the head into a pot, bring to a boil, reduce to a simmer and give it about three hours. You can test with a fork to see if the meat pulls away easily from the bone. Remove the head and pick off the meat, which then goes right back into your pot. Toss in your veggies for another 20-30 minutes and you're done. You should add some peppers for heat. Because we're all about economy here, you can create a few meals from this. Pick the remaining meat from the head, brown on a stove top with some onions, add a little lime and wrap it in a tortilla. 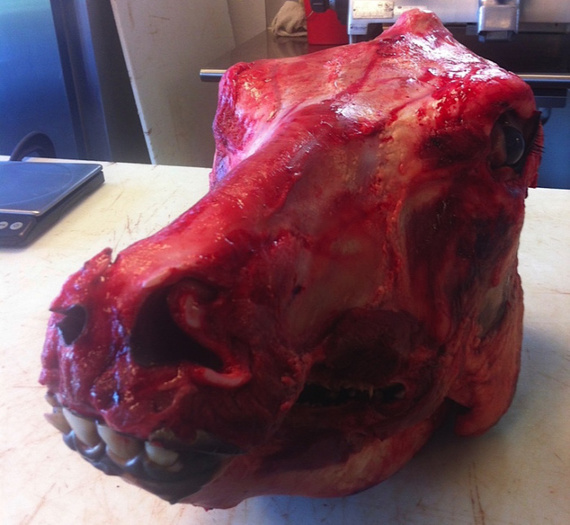 I've saved the most difficult for last. It's not necessarily that preparing a beef head requires any more skill than the methods above. Sure, you'll need a much larger pot. But what makes this so difficult is procuring the heads. They're difficult to come by, but not illegal -- as some have said. As you've heard me say before, slaughterhouses have found other revenue streams for these unwanted products over the years. Beef heads, unlike their porcine counterparts, haven't come back into fashion as quickly. Let's change that. While this isn't a traditional barbacoa recipe, I don't want your neighbors wondering why you're digging holes and burying skulls in your backyard. This is about as easy a recipe as you can get.

Rub the salt, pepper and cayenne over the entire head. Most tongues are removed from beef and sold separately. If you can get it, great. If not, no worries -- there will be more than enough meat.

Wrap the head with the banana leaves or parchment paper and secure with some kitchen twine. Place the head into the pan and secure the other pan over the top with twine. Into a 275°F oven for at least four hours. You want that meat to fall off the bone. That's it. Remove and shred the meat, invite 20 friends over, and make some tacos! And if you've got a smoker, even better. 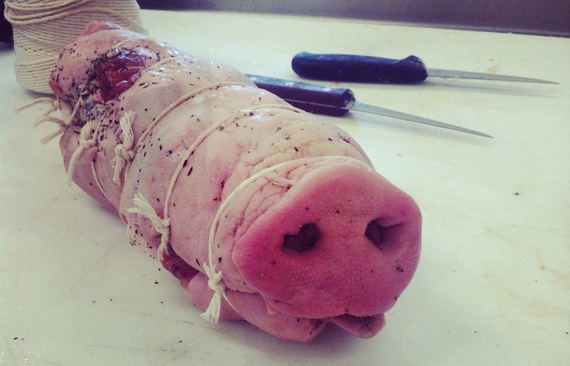 If all this is a bit much for you, you can start off even easier. Try working with cheeks first and work up to a jowl. But remember that those bones are full of nutrients and you're going to need plenty of stock around the house if this winter in the Northeast is going to be as bad as they say it will be.