Craft beer production is up. And, according to Time, consumption is too. Whereas total U.S. beer sales, including unwavering brands like Budweiser and Miller, inched up by only 0.5% in 2014, the world of microbreweries soared upwards 18% by volume and 22% in dollars. Imbibers are embracing small industry, and with it, a growing segment of design -- the beer logo. 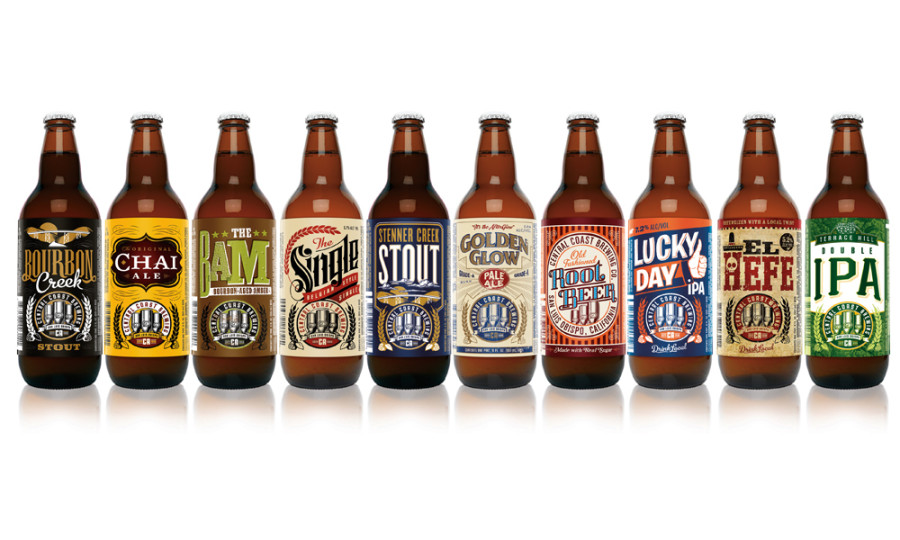 A new book from authors Daniel Bellon and Steven Speeg is highlighting the glorious packaging, typography and illustration that has come to accompany some of Small Beer's best offerings. From the minimalist dots of To Øl to the "Clockwork Orange"-esque imagery of Three Floyds Brewing, the effortlessly titled Cool Beer Labels offers a glimpse into the best art and design from breweries around the world.

The book spans a laundry list of breweries, from the familiar American names -- Brooklyn's Sixpoint, Portland's Hopworks, and Denver's Great Divide -- to perhaps less recognizable international brewers like A. Le Coq in Estonia and Quaffing Gravy in England. Sure, the publication features a few large companies too, the Czech Kozel brand among them, but for the most part, Bellon and Speeg place their focus on craft. Their aim: to demonstrate "how commercialized packaging design can be elevated to a whole new level."

As designers, Bellon and Speef are graduates of University of Cincinnati's College of Design and the Paier College of Art and Design, respectively. As beer drinkers, they are home brew enthusiasts who seem to have found the perfect intersection of alcohol and art. Greg Koch, co-founder and CEO of Stone Brewing Co., provides the foreword for the tome, introducing a dive into the design process of both master brewers and master designers. We have a preview of the work below. For more on Cool Beer Labels, check out the website here.

CORRECTION: A previous version of this post incorrectly identified the location of To Øl. We regret the error.

Craft Beer Book Is Celebrating The Best Art From Breweries Around The World
25 Documentaries You Need To Watch On Netflix Now
1 / 25
Cutie and the Boxer (2013)
A candid portrait of a 40-year marriage between Japanese "boxing" painter Ushio Shinohara and his wife, Noriko. Even if you're not particularly fond of contemporary art, this doc shines a light on the anger, sacrifice and confrontation involved in an aging relationship. And you can't help but fall in love with Noriko.