The CoolClimate Art Contest called on artists worldwide to submit their work for the first online art competition designed to generate iconic images that address the impact of climate change. More than 1,000 artists from around the globe made submissions through CoolClimate's partner, deviantART.com, the largest online network for artists, creatives, and art enthusiasts, with 15 million members worldwide. As Agnes Gund, art expert and one of the judges for the contest said. "There is probably no issue more important facing us today then how we are affecting our environment. The CoolClimate Art Contest is a smart and engaging way to compel artists to influence and communicate the critical issue of climate change. Art has the power to persuade on a deeply emotional level, sometimes more effectively than grafts or numbers or datasheets."

A panel of notable art experts and celebrities selected the 20 semifinalists that were featured on The Huffington Post where the public voted to determine the Top 5 winners. "No Pollution Please" by Christos Lamprianidis from Greece won first place.

Environmental organizations are being provided with an image tool kit that offers 10 ideas for using the CoolClimate Art finalists in their ongoing climate change communications. Van Jones, environmental activist and judge for the Contest stated, "These powerful images speak to the air, water, and earth that sustains us, and reveal the perils arising from our addiction to coal and oil. Human ingenuity created these problems; human creativity -- on full display here -- can get us out. I encourage all environmental activists to use these images in their ongoing climate change communications."

All entries, as well as winners and finalists, can be viewed at the CoolClimate deviantART website. 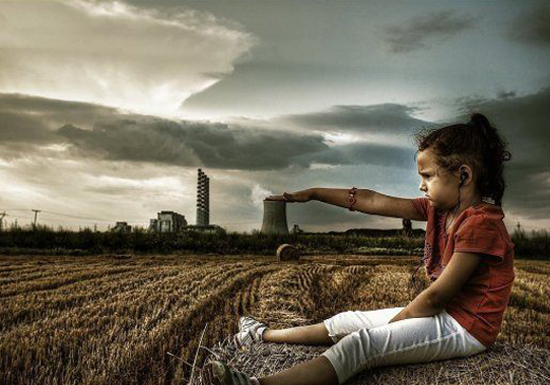 First of all I would like to thank you and all participants in this competition. It was a real challenge and a chance for us to bring attention to a major problem that affects us all, wherever we live in this planet. It concerns us all, and the sooner we realize it, the more drastic measures we can take.

A few words about me and the area I live:
I'm Greek. And I have the privilege to live in a gifted place, in Western Macedonia, in the northwest part of the country. The most peculiar part of the Greek country; which is not surrounded by the sea. It does not lack, however. Dense forests, rivers and lakes cover almost 65% of the surface. Along with the culture and history, this part of the country also has a unique treasure -- the rich mineral deposits. The subsoil has been rich in lignite deposits for the last 50 years, which is at the same time the main source of electricity production throughout the country. Lignite plays an important role in Greece's energy sector as it satisfies more than 70% of country's needs in electric power. The extraction of lignite takes place mainly in two regions of Greece, namely Western Macedonia and Peloponnese.

This coin has two sides, like all currencies. The one side says it's the "energy heart" of the country's largest growth industry, mining and electricity production, and provides work to more than 8,000 people, has a high GDP with significant growth potential. For many years, our region has been synonymous with energy.

The other side -- the problem:

The long stay of power plants in the region has brought huge environmental pollution. The ash and particles emitted by the blast furnaces of the Public Power Corporation (PPC) are particularly aggravating to flora and fauna and make the area the most polluted environment in Greece. The Greek Public Power Corporation is the fifth largest lignite producer in the world, while the most polluting thermo-electric power stations in Europe are those of Agios Dimitrios (pictured) and Kardia in Kozani (report by WWF).

The environmental effects are incalculable:

The PPC's lignite power stations emit huge quantities of carbon dioxide (CO2) into the atmosphere, which is known to be the main cause for global warming and the greenhouse effect. According to existing research, the PPC power stations in Greece annually emit 43 million tons of carbon dioxide into the atmosphere, representing 40% of total carbon-dioxide emissions in the country.

It is not my business to speak further on statistics and numbers. This is the work of scientists and researchers and is available for those who really want to know more. The problem was not what motivated me. The problem is already known.

I am a teacher. I teach high school pupils. But, above all, I am a father. And I'm afraid. I do not want the environment we live in to jeopardize the lives and future of our children; my children, my pupils, all habitants' children.

But I'm also a photographer. It is my hobby. Is there any better way to show your view of the world? How could I better depict the beauty but also the damage of my area, as well as the needs of its residents?

I do not want my city, which has so many beauties, to die every day through the uncontrolled use of mineral substances in return for prosperity in the region. And what will happen as soon as we run out of mineral substances? What kind of land and air will our children and grandchildren inherit?

We are not asking for anything more than to protect our land, the environment and our lives. This can be done by installing modern filters, with the contribution of alternative-energy sources, and by making the decision to adopt green policies that protect the environment we live in and will pass on to future generations.

It's criminal to use the high cost of these works as an excuse for not implementing them. We do not tolerate profits to be more significant than our lives and the environment.

This agony motivated me.

Having my camera as a tool, I took a photo. I worked it out as if I were painting a picture with my soul, and I gave it a name: "No Pollution Please" in order to live, have a future, and hope.

I do not know if I had any success, if I managed to alert anyone, If I made people look straight into the problem. But that was what I wanted. Through my love for photography I tried to show how much I love my country and how desperately all those who love and respect it want those responsible to do something. By any means, from any post. I only have my camera. Some people can do much more, provided that they want to. Let us try all together. I hope we can make it...