"Listen, I'm kinda busy," a certain in-demand Facebook all-star and global celeb breathlessly states on his profile, which was liked by 56,963 people as of Monday night. "My name is Cooper and my humans thought it would be fun to send me out once a week with a small digital camera on my collar to find out what I'm up to. So now I'm not only the neighborhood patrol, it seems I'm a documentary photographer, too." Behold Cooper, the five-year-old American Shorthair photographer-puss of Seattle who's single-paw-edly proving that it is, indeed, possible for a cool cat to rise to the top in the dog-eat-dog art world. 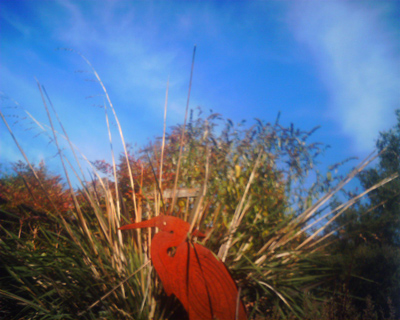 During the past three years of his fur-tuitous career, Cooper has churned out a veritable cat-alogue raisonné of photos taken on weekly jaunts around the neighborhood, during which he pussyfoots through brambles, along fence-tops, and under cars armed with a camera collar that snaps shots every two minutes. Indeed, the super-pet and his "human affiliates," Michael and Deirdre Cross -- who lucked out in adopting a certain talented stray in 2005 -- are now basically just lapping up the phenomenal success of the cat artist. For Cooper's no untalented tabby -- he's a regular Henri Catier Bresson, Eadweard Meowbridge, or Catget, you might say.

As revealed in the "Best of the CAT CAM" album on Facebook, Cooper's photos are vernacular visions of the feline artist's environs, captured in saturated, sunny colors -- Cooper rarely ventures out in inclement weather -- that have an air of William Eggleston about them. One work, titled "Risqué," takes a saucy look up a lady's skirt, while others present ominous close-ups of Cooper's (human) baby brother, Cameron, who slumbers peacefully as his rival for the Cross' affection stalks ever closer... until he hovers only a whisker away. As a stylistic flourish, the photographer cat has turned a defect in his camera into something of a signature: all of his pictures are dated July 2006.

Still other photos capture tulips, the corner of a "Star Wars" poster, tall grasses, a lily-white statue of the Madonna, and garden gnomes espied through the underbrush. A particularly dramatic series portrays other cats on the prowl, many of whom social media commenters have posited might be Cooper's secret girlfriends. (The tail-chaser is not coy about his charms, boasting on his site that "the local lady cats rather dig a bad boy with a camera.") But it is the love of the critics that gratifies Cooper the most, such as when the Daily Mail eruditely weighs in on one of his choicest works: "In one hilarious snap the moment he mocks a dog trapped behind the glass of someone's front porch is taken with almost human-like humor."

The press, in fact, loves Cooper. As recounted on his impressive website, the photographer cat has appeared on everything from Animal Planet to the Today Show Australia. People magazine has even raved about his work: "We were blown away!" And this attention has translated into financial success: Cooper has "sold thousands of dollars of work and we haven't had an unhappy customer yet," says Seattle art dealer Kevin Law, who sells the photos at his Urban Light Studios gallery. But that only hints at the commercial empire Cooper has spawned.

His Cat Cam book retails for $19.95 on Amazon, where one customer reviewer calls it "a great way to experience both his work and his more personal, less public side," recommending the publication "if you love cats or you just love celebrity -- you get to see him in both roles." Then, for true Cooper devotees, t-shirts and SIGG bottles emblazoned with the cat's visage are available online, along with numbered, limited edition prints of the photographer's finest works, complete with "paw-tograph" signatures on the back. Unframed, these usually go for around $145, while framed photos are sold for $265 a pop. (If those prices seem a bit steep, be consoled by the fact that Cooper, being a Renaissance cat, is also a philanthropist and gives a portion of his proceeds to the Paws animal shelter.) 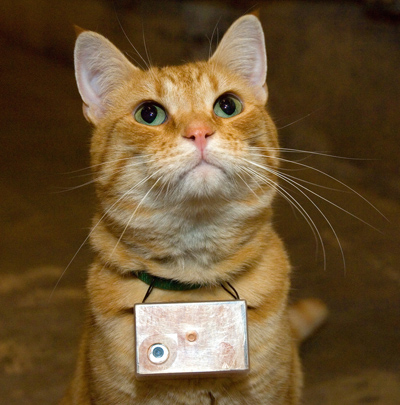 Today it seems that Cooper's photography has great resonance with a range of contemporary artistic practices. Taking inspiration from the Chapman Brothers' pet Staffordshire bull terrier, Kylie, whose art video explores the lower reaches of the artists' studio, Cooper too has been dabbling in the motion picture business of late. His still photographic work, meanwhile, makes us think of NYU professor Wafaa Bilal ("Professor Camera Head"), who had a camera surgically implanted in the back of his skull to transmit images to the Internet every minute. But most recently, and ominously, Cooper's influence has been insinuating itself closer to home, with a potential rivalry on the horizon with his human brother, baby Cameron: as Michael Cross told the Daily Mail, "People keep asking when Cameron will be wearing a camera around his neck. And now that he's started crawling, Cooper could have some competition."

To check out Cooper's video art, visit his popular new YouTube channel, or watch the clips below.

More of Today's News from ARTINFO:
James Franco to Bring His Obsession With James Dean to the Venice Biennale
Our Hanging Gardens: A Knocked-Out Preview of the High Line's Second Phase
A Look at Five Arresting Images From New York Photo Fest
Cannes 2011 Update: Iran Cracks Down on Filmmakers, Scandalous Italians Abound, and the Second Coming of Kubrick?
The Art (and Bizarre Sociology) of the Eurovision Song Contest