"After 65 days of occupying, and in reaching an agreement that will afford the community a real say in the future of free education at Cooper Union, we've moved on out of the president's office and on to our next steps," the group wrote in an email announcement on Monday.

The students left the office with plans to establish a 16-member task force to be chaired by trustees Mike Borkowsky and Jeff Gural. The task force will explore returning to "providing full-tuition scholarships for all enrolled students," according to an outline document provided by the protesters to The Huffington Post.

The Cooper Union Board of Trustees announced in April that the school would begin charging undergraduate tuition for the first time in more than a century. Tuition has historically been covered by full scholarships for every student at Cooper Union, which offers degrees in art, architecture and engineering. While the decision did not affect current students and roughly one-quarter of new students would still pay nothing under the new plan, the change outraged many at the school.

The protest was the second time in less than a year that Cooper Union students occupied a portion of the school's Foundation Building in Manhattan. A previous demonstration took over the top floor of the building for a week in December 2012. This summer protest was a self-described "open occupation" of the president's office -- instead of barricading the doors, the protesters kept them open so students could come and go as they pleased. While the president technically could have tried to use his office during the protest, he vacated it for the two months, students told HuffPost.

Unlike the students' earlier demonstrations, the Cooper administration agreed to negotiate with the students this time around, as it became clear they did not plan to vacate the office any time soon.

The task force, comprised of board, faculty, alumni, student and administration representatives, will submit its report to the administration and Board of Trustees by Dec. 1.

In the meantime, Cooper students secured a common area to keep the Free Cooper Union campaign going on campus, with plans to lock down a permanent space before the start of the fall semester. The school administration has also agreed to grant amnesty to anyone who may have violated school rules during the summer occupation.

The Cooper Union board will also add a student representative to its board starting in December -- a change the activists have long demanded.

Victoria Sobel, a student protester, said in a statement, "We and the rest of Cooper’s community believe that when our efforts and experience are added to the board’s, that we will find a way back together to [founder] Peter Cooper's vision of education that is as 'free as air and water.'"

PHOTO GALLERY
Scenes From The Dec. 8 Rally And March In Support Of The Cooper Union Protest

Cooper Union Occupation Ends After 2 Months With Promise Of Task Force
Scenes From The Dec. 8 Rally And March In Support Of The Cooper Union Protest 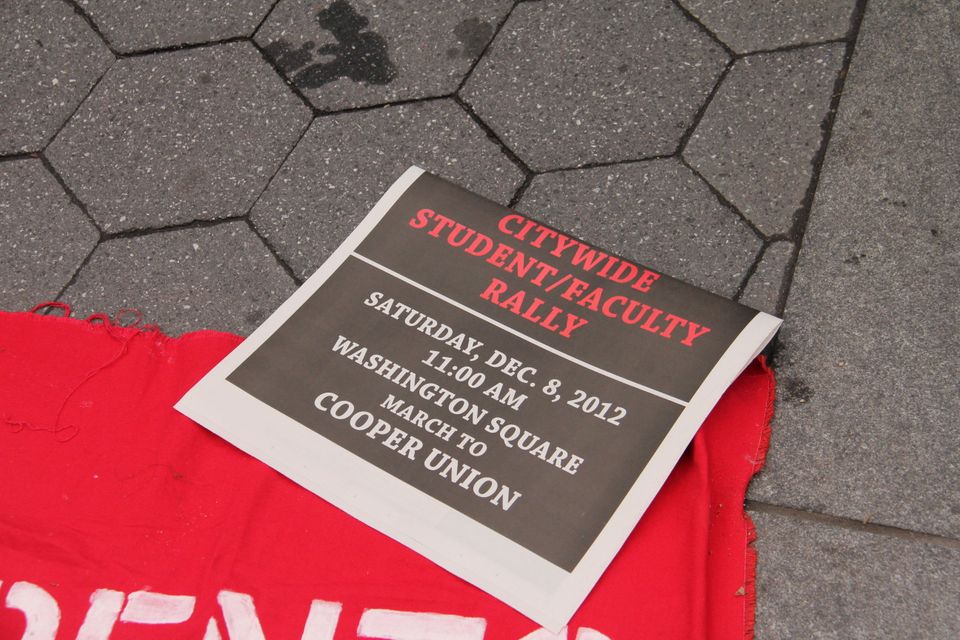