Talk about connecting seemingly irrelevant things together and seeing things from different angles! Last week it was my privilege to lead two workshops for children at the Cooper-Hewitt, National Design Museum. They were titled "Toying with Transformation" and inspired by the current exhibition "Set in Style: The Jewelry of Van Cleef & Arpels." The premise was to "teach" kids how to design toys that transform while cultivating creative cognition. 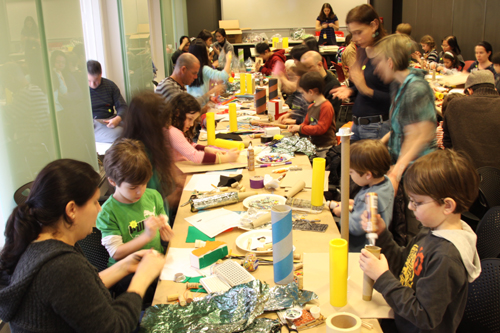 My explanation of the project was laconic by design; since there were no set expectations or right answers, there was no need for lengthy descriptions. I said: "Imagine a cardboard box that is a rocket ship today, a hospital tomorrow, and a workshop or a restaurant or a theater the following day." The concept seemed very clear to them; they knew exactly what I was talking about. To tie it back to the exhibition, as the kids had already done a scavenger hunt and were familiar with the show, Caroline Payson, director of Education Department at the Museum explained: "The Zip necklace by Van Cleef and Arpels has a zipper that really works! And depending on whether it is zipped or unzipped, it can be worn as a necklace or a bracelet."

Most of the kids in attendance engaged immediately. Oh yes, before I get carried away describing the process, let me mention a few important details. Cooper-Hewitt produces free family-centered programs that are made possible by a generous grant from Target. These Target Design Kids Workshops are held on the regular basis, every second and fourth Saturday of the month. They are run in two (morning and afternoon) 90-120 minute sessions. The classroom space is carpeted and used for formal events as well as the kids programs so that paint or messy materials are not possible; however, there is a well-stocked supply cabinet at hand!

Generally, there are about 15 to 20 families in a workshop at one time; children and parents are encouraged to work together. Yet, it is mostly kid-directed. Participants range in age from two to nine years old. One of the prerequisites for the guest facilitators is that the workshop activity allows kids to design and shape the final product rather than just assemble or decorate something that has already been made for them. No problem. I have had plenty of experience with my own "Children's Architecture Workshops" program and was eager to immerse in the creative process as much as everyone else.

Actually, encouraging creativity is my focus in life. As an architect, specializing in design for children (who was neglected as a child), my involvement is rooted deeply. In fact, I became a creativity coach in order to gain a voice of an advocate. There is a phenomenal body of evidence that supports my intuitive approach. For instance, a Newsweek article published in July of 2010 "The Creativity Crisis" refers to scientific data proving the hypothesis that creativity can be taught. It states:"The accepted definition of creativity is production of something original and useful. ...There is never one right answer. To be creative requires divergent thinking (generating many unique ideas) and then convergent thinking (combining those ideas into the best result)." In my opinion, Cooper-Hewitt fully embraces this definition and provides a platform as well as tools for parents to stimulate growth of their children's creativity.

The process is focused on allowing a unique perspective, trusting imagination, and conveying emotions. Children are fabulous at doing that while weaving stories with lots of details and humor. For example, one girl made a kaleidoscope that could double as a ring toss and a vase, complete with flowers. Indeed, we had a proposal for a bullet train that turned into a horn and then--a rocket ship. Someone came up with a robot that was a jewelry box at the same time. Then, there was a school bus that turned into an airplane and a hobble-head bug that transformed into a telescope. Would you like to hear more? I can go on and on. After all, we had over 50 kids, each one of them with an individual point of view. 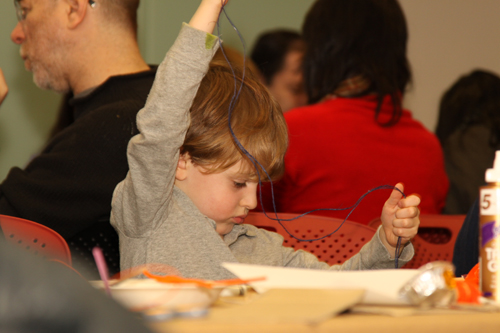 I was delighted to partake in the experience that Cooper-Hewitt so playfully facilitates; watching the expressions on everyone's faces reminded me once again about our primary responsibility as grown-ups to our children. We are obliged to provide them with the freedom of expression. We are here to motivate and to push them constantly in the direction of the unknown where they have no choice but to ask questions and learn. In my mind, Target Design Kids day of workshops presented a perfect case study illustrating exactly what needs to be done to instill creativity.