About half of the State of Alaska -- an area larger than Texas -- lies in the Arctic. This makes the United States an "Arctic Nation", one of only eight with territory in the region. The others are Russia, Canada, Denmark (Greenland), Iceland, Norway, Sweden and Finland.

The Arctic Ocean and closely connected shelf seas cover about 8 million square miles, and the adjacent Arctic lands total about five million square miles. Across this vast land area live only 4 million people, half of them in the Russian Arctic. The Alaskan Arctic is home to only about 140,000 people, at a population density of half a person per square mile (compared to 106 people per square mile in the Lower 48).

Notwithstanding the tiny population of Arctic lands, however, the region is of great economic, environmental, and strategic importance:

· They are home and feeding grounds to vast populations of wildlife, including many species found nowhere else;

· The land is home to indigenous peoples whose culture and way of life deserve respect and protection;

· The decline in sea-ice cover in the Arctic summer is opening up new navigation routes, new access to subsea resources, and corresponding new demands for marine infrastructure and governance;

· Other aspects of climate change in the Arctic are posing major additional challenges both inside the region and beyond it;

· Questions of sovereignty over the Arctic Ocean seabed beyond the usual 200-mile Exclusive Economic Zone are giving rise to conflicting claims and corresponding concerns; and

· Seven of the eight Arctic nations maintain military bases in the region (Iceland is the exception), with the recent expansion of Russia's network of bases having drawn particular worried attention.

The strategic importance of the Arctic region has been clear since World War II, and Alaskan residents and their representatives in Congress have always paid attention to the issues and tensions around fisheries, wildlife, conservation lands, and resource development, as have the Department of Interior (including the Fish and Wildlife Service, the National Park Service, and the U.S. Geological Survey), the Department of Agriculture's U.S. Forest Service, and the Commerce Department's National Marine Fisheries Service. But recognition from the U.S. Federal government of the need for a coherent, cross-government approach to Arctic issues and policy emerged only in fits and starts, beginning in the 1980s with the Arctic Research and Policy Act of 1984 (amended 1990).

In 1996, the United States linked up with the seven other Arctic nations to form the Arctic Council, which is focused on promoting collaboration on and coordination around Arctic fisheries, environmental monitoring and protection, scientific research, maritime search and rescue, and indigenous-peoples' issues. The U.S. Secretary of State and the foreign ministers of the other participating nations lead the Arctic Council, together with the heads of six organizations representing Arctic indigenous peoples.

The first-ever national Arctic Region Policy was rolled out at the end of the Bush Administration, in early January 2009. The Department of the Interior led preparation of an interagency report on Artic Management that was released in March 2013, and the National Security Council coordinated development of a National Strategy for the Arctic Region that came out in May of the same year. The National Strategy defined lines of effort under three overarching focuses: advancing security interests of the United States; pursuing responsible stewardship; and strengthening international cooperation. 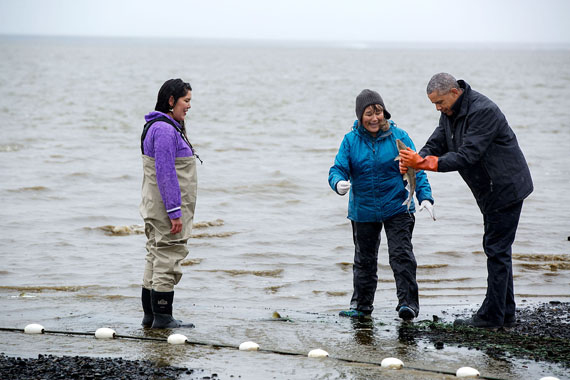 Then, a year ago, President Obama increased the Nation's engagement on Arctic issues yet again by issuing an Executive Order entitled "Enhancing Coordination of National Efforts in the Arctic". The January 2015 Executive Order created a new Arctic Executive Steering Committee (AESC) responsible for fostering communication, coordination, and collaboration among the 25 Federal departments, agencies, and offices with responsibilities in the Arctic region. One of us (Holdren) serves as Chairman of the AESC and the other (Brzezinski) serves as its full-time Executive Director. The Vice Chair is Deputy Homeland Security Advisor Amy Pope.

The President tasked the AESC with helping to shape and reconcile Arctic priorities among the participating Federal entities, promoting coordinated implementation and evaluation of government initiatives in the Arctic region, improving the coherence of the Federal government's engagement with the State of Alaska and Alaska-Native communities, and supporting Secretary of State John Kerry and his team as the United States assumes the rotating Chairmanship of the eight-nation Arctic Council for 2015-17. As we look back on the first year of the AESC's work, we can report significant progress on all of these fronts.

At its first meeting, last February, the AESC set up seven working groups: (1) cross-agency coordination of implementation of the National Arctic Strategy; (2) use of high-resolution satellite imagery for regional planning and emergency preparedness and response; (3) oil-spill preparedness; (4) interactions between the Federal government and native communities; (5) coastal erosion and flooding in high-risk Alaskan settlements; (6) reliable and affordable energy for remote Arctic communities; and (7) planning for a ministerial-level international summit on climate-change challenges in the Arctic.

The first six of these working groups met frequently over the course of 2015, and all have developed and have begun to implement significant new initiatives while simultaneously providing improved coordination and oversight of the implementation of pre-existing efforts. In the remainder of this essay, though, we want to focus on the culmination of the work of the seventh group--the 22-nation GLACIER Conference, which was held in Anchorage on August 30-31, 2015, and President Obama's accompanying multi-stop visit to Alaska, which included the first-ever trip to the Arctic by a sitting American President. (GLACIER stands for Global Leadership on the Arctic: Cooperation, Innovation, Engagement, and Resilience.)

The GLACIER Conference, the President's trip, and additional associated events featuring Cabinet members and other senior Administration officials built upon and helped advance the work of all of the AESC working groups, not just those focused explicitly on climate change. That is evident, for example, in the announcements the President made in Anchorage, Seward, Dillingham, and Kotzebue, which covered a multitude of new initiatives focusing on a wide range of issues. You can read about the announcements here, here, and here.

But it's the inescapable conclusion of anyone who spends time in the far North that the challenge of coping with climate change looms over and interacts with just about every other issue and interest in the region. Over the past 60 years, Alaska has warmed about twice as fast as the rest of the United States. Last year was Alaska's warmest year on record, just as it was for the rest of the world...until 2015 surpassed it. In some parts of Alaska and other Arctic regions, the rise in average temperature has been three to four times the global average.

As President Obama noted in Anchorage, this reality puts the Arctic at the leading edge of global climate change -- a preview of where the rest of the world is heading. One of the most conspicuous impacts within the region is shrinking sea-ice coverage, which results in increased maritime activity (with economic benefits but also new demands on infrastructure and oversight), increased coastal erosion from storms, and feeding/breeding challenges for seals, walruses, whales, and polar bears (impacting subsistence hunting).

Another impact within the region related to climate change is the melting of mountain and coastal glaciers. Alaska's glaciers alone have recently been estimated to be losing 75 billion tons of water annually. This increases river discharge and turbidity, which in turn affects erosion and, potentially, fisheries in the ocean as well as in the rivers. Other impacts include thawing of the permafrost that underlies 80 percent of the land area of Alaska, leading to subsidence that threatens buildings, roads, and energy infrastructure; and bigger and hotter wildfires, which destroy valuable timber and wildlife habitat, create massive smoke pollution, and accelerate permafrost thaw.

But the impacts of climate change in the Arctic are not confined to the Arctic. The increased discharge to the ocean of meltwater and icebergs from glaciers and the Greenland ice sheet is contributing to the acceleration of sea-level rise worldwide. Increased release of carbon dioxide and methane from Arctic wildfires, microbial action on organic carbon previously frozen in permafrost, and thawing methane hydrates in soils and sediments speeds up global warming. And it's increasingly clear that atmospheric circulation patterns in the mid-latitudes -- including storm tracks and extremes of hot and cold -- are being affected by the more rapid warming of the Arctic compared to the rest of the world. (Read more about climate-change impacts within and beyond the Arctic here.)

The activities undertaken by the Arctic Executive Steering Committee in its first year -- and by the State Department in its work so far supporting the 2015-17 U.S. Chairmanship of the eight-nation Arctic Council -- are only the first step in meeting President Obama's commitment to coordination, cooperation, and global leadership in meeting Arctic challenges. There is much more to do. As the Chair and Executive Director of the AESC, we look forward to the continuation of these efforts, in collaboration with our partners across the Federal government, the people and officials of the State of Alaska, and Arctic stakeholders around the world.