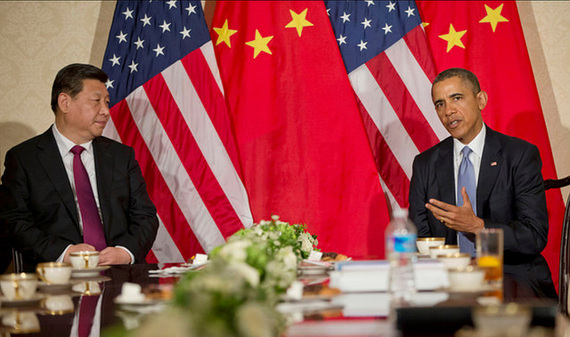 From November 30 to December 11 this year, the 21st United Nations climate change conference (or COP21 as it otherwise known) will be hosted in France's capital. Ostensibly, this is a conference which aims to bring all nations together under one legally binding umbrella; a global affair in every respect of the word. It is two nations in particular though that all eyes will be upon as these negotiations progress: the world's biggest producers of carbon emissions, China and the US. Although any progress made during COP21 will be welcomed - even if only one small Pacific island nation additionally subscribes to its specified aims - without positive gains made regarding these two economic giants one could be forgiven for thinking that it had all been an enormous and costly waste of time.

Historically there has been some contention between China and the US whenever the ghost of emissions past has raised its head. As China's economy has grown in recent years and its emissions consequently risen in tandem, the US had insisted that they be responsible for the greatest cuts. China, on the other hand, has argued that America's historical contribution far outweighs its own and that they instead must be responsible for bearing the brunt of efforts to control carbon emissions. Although this argument might sound somewhat petty on first hearing, there is some logic in it. Economically speaking this is obvious. America has had its industrial heyday; a spell of almost exponential economic growth that launched it into its position of preeminence during the 20th century. China is in the middle of its equivalent and is reluctant to abandon the same potential for even further growth. However, there are also sound scientific arguments supporting China's outlook. Emissions accumulate, for example. They don't just disappear after a year or two and, according to some sources, America's accumulative emissions are more than twice those of its pan-Pacific neighbor - making China's outlook on the matter wholly understandable.

Generally though, relations between China and the US - the world's latest bipolar balancing act - have rarely been better. Early fears, at the dawn of China's rise, of the emergence of a new cold war have largely been unfounded with the East Asian giant subscribing to a whole array of international governance mechanisms. These have, fortunately, also included a compromise on their position regarding carbon emissions, and last week saw China announce the launch of a national cap and trade scheme to begin in 2017. Essentially, this is the issuing of state licenses for emission limits with proportional cash returns for shortfalls, much along the same lines as schemes that already exist in the EU and the US. But with US commitment to cap-and-trade wavering under the burden of an apparently one-sided deal, not only does China's commitment stabilize that particular sinking ship but it also marks significant leadership in steering other developing countries into the international fold. In fact, China's leadership over this whole question goes beyond the mechanics of the scheme and elements of its content, particularly regarding power generation for the production of aluminum and other non-ferrous metals, display signs of genuine proactivity.

Aluminum is significant because it is developing a far greater presence in industry than ever before - especially in automotive production. And, despite certain sections of the global economic community maintaining an entirely opposite point of view (chiefly those responsible for the manufacture of steel), this fact is not nearly altogether a negative one. Aluminum for example, besides being highly recyclable, is a great deal lighter than steel resulting in far fewer emissions over a vehicle's life time. The true issue lies in the actual manufacture of aluminum; a process that produces up to five times more the carbon emissions than traditional alternatives. This does not, of course, have to be the case. In any form of production it is not the amount of energy produced that comes under scrutiny, but how it is produced - and in China, as with such other states as India and Australia, there is a predominant reliance upon coal to fulfill energy requirements. With coal at its source, the production of aluminum is not environmentally sustainable.

It is difficult to see then, how future discussions on carbon emissions cannot include serious debate on the issue of producing non-ferrous metals. As of yet, the production of aluminum and similar metals has not been scheduled for discussion at COP21, and it is unlikely to be so at this relatively late stage. To not do so, however, would be unfortunate as current aluminum policy is a perfect example of the choices China must make moving forward environmentally. Current state policies, like a cut in power prices for coal-fired plants and subsidies on secondary aluminum exports, have made Chinese industry used to a cushy (and polluting) position in global markets. Bringing aluminum up at COP21 would allow Chinese leaders to show their true commitment to reducing emissions, even when it is likely to anger allies at home.