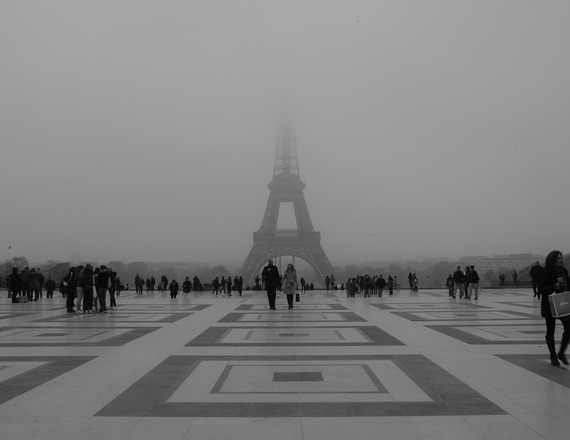 Habemus consensus! That was the roaring message delivered by the representatives of the roughly 200 countries on December 12 in Paris, following the two-week long COP21 summit that peaked with a dramatic last-minute upset that pushed the talks into overtime. More than 900 points of disagreement (or "brackets" in summit parlance) were smoothed over during the talks, yielding an agreement that went beyond the expectations of many analysts. But once the hubbub dies down and the floors of the Le Bourget conference centre are swept clean of confetti, will the long-vaunted objective of keeping global warming under the 2°C mark actually be respected?

While the technocrats were shaking hands and congratulating each other on their exceptional feat, the UK witnessed its fourth major storm of 2015, which resulted in the flooding of thousands of homes and businesses in Cumbria. Halfway across the globe, in China, Beijing announced its first ever red pollution alert as smog and haze engulfed the capital. The concentration of poisonous particles went off the chart, and some businesses even went so far as to charge customers extra for the privilege of breathing purified air. In the Philippines, Typhoon Nona caused chaos, killing at least nine and prompting the evacuation of some 750,000. And in India, Chennai witnessed the worst floods in a century when the streets of the 4 million strong city were turned into Venice-like canals.

While the COP21 was a diplomatic masterstroke painstakingly organized by French Foreign minister Laurent Fabius, getting 200 countries to agree on a non-binding framework will not singlehandedly fix the planet's climate. We should remember that at the end of the day, what Paris gave was a 32-page document, with lofty goals and little enforcement power other than the notoriously fickle "naming and shaming". The real work has to start now, because, as the recent bout of extreme weather phenomena has shows us, the environment cannot wait much longer.

Averting the amplification of extreme weather events that result from the pumping of CO2 into the atmosphere requires much more than what individual governments have put forward in their pre-summit voluntary contributions (the INDCs). Even if the agreement mentions a commitment shared by close to a hundred countries to push for a limit of 1.5C for the rise in global temperature, the combined plans to cut CO2 emissions put the world firmly on a 2.7C track. Environmentalists correctly pointed out that Paris will only provide the roadmap within which it will be up to individual governments and private companies to come up with solutions.

The agreement left two big issues unaddressed. It is far from clear what the legal value of the document is and whether, as Naomi Klein correctly pointed out, existing trade agreements like the TPP and the forthcoming EU-US FTA (TTIP) will not supersede COP21 rules. However, while the future behaviour of corporations is difficult to predict, is not clear, the fact that in the run up to the conference a coalition of 2000 financial institutions and individuals worth a combined $2.6 trillion agreed to pull the plug on any further investments in coal, shows that the private sector may very well toe governments' line.

Which brings us to the second big elephant in the room: coal, the biggest net contributor to CO2 emissions. Its dirtiness is only rivalled by its ubiquitousness. Germany's much lauded solar revolution is shadowed by a net increase in coal plants, the Republican-controlled Congress pledged to fight tooth and claw to protect the country's coal industry, while some developing countries trumpet that their development can only be achieved by burning through the world's abundant and cheap coal reserves.

So why is coal so important? Because while leaders have paraded lofty goals to reduce CO2 emissions, the sad reality is that some countries are virtually incapable to kick their addiction to fossil fuels without unprecedented shifts in policies. For China, coal is the magic bullet that has transformed the nation into the world's biggest producer of steel, aluminium and multiple other metals.

Take aluminium production, arguably the most influential and omnipresent metal in the 21st century. As I've written before, while some countries, specifically Norway, Iceland and Russia are leading the way in the promotion of climate friendly hydropower in the production process, other countries including China and Australia continue to produce the popular material with the use of cheap coal. The importance of encouraging more countries to put in place a realistic plan to begin wider use of renewable and sustainable energy cannot be understated, particularly in the case of the high energy consuming aluminium industry. According to Norsk Hydro's chief executive Svien Richard Brantzaeg, "If what we produce in Norway was replaced by a million tonnes in China, then global emissions would rise by 13-14 million tonnes per year. That is quite a big chunk".

In September this year in a joint statement with the US, China announced its intention to introduce a national emissions trading system in 2017 and peak its CO2 emissions by 2030. China also pledged $3.1 billion to support developing countries in their efforts to reduce pollution. But even if China's leaders do appear to be waking up to the painful reality of climate change, the shift away from coal will be a massively complex endeavour, since it entails a complete revamp of the country's industrial paradigm.

So what good will the COP21 bring if the agreement is non-binding and the biggest culprit behind climate change does not even feature in the final document and is almost impossible to phase out? Quite a lot in fact -- because for all its shortcomings, the fact that such an ambitious deal was reached in Paris with all the world's governments is precisely that paradigm shift that will galvanize all policymaking for decades to come. If before Paris some governments had a beggar-thy-neighbour approach to climate change, arguing they would not commit to targets or take action unless their neighbours (and geopolitical rivals) do the same, the COP21 achieved just that. After December 12, the ball is no longer in the UN's court but firmly in the court of individual governments. The time for foot dragging has lapsed, it's game time.