I saw Copenhagen by bicycle. It was easy, it was safe and it's the best way to get around the city.

Copenhagen is going green, and an estimated half of the city's 570,000 people now get to where they want to go by bicycle. You can see the city by tour bus, van or some other organized way of exploring, and that's all well and good, but by bicycle, especially in a city that is so bicycle-friendly, you get to see it at ground level and still cover a lot of territory.

Copenhagen in the autumn is an especially good idea. The weather is good, the tourists are gone (except for you, of course) and you can get into some of the best restaurants without waiting for days or even weeks (unless, of course, it's Noma, recently voted the best restaurant in the world). 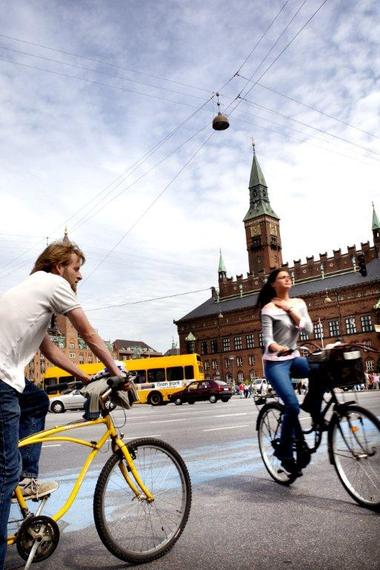 I met some friends at my hotel, the Imperial, near the central train station, and we struck out early one sunny morning for city hall (Radhus), where there's a statue of the writer Hans Christian Andersen, Denmark's favorite son. A gaggle of tourists were posing next to the statue, and in the plaza an impromptu game of soccer was taking place.

We then biked a short distance to the Latin Quarter where part of the old university is located (the campus is scattered among four different locations). The streets are narrow, some cobblestoned, and it's often a tight squeeze between cars and bicycles, but bicycles, as always, are given deference. The streets are full of book stores and cafés.

From there is was over a bridge (Copenhagen is crisscrossed by canals) to the parliament building, or Folketinget, where, as an unabashed fan of the Danish television series "Borgen," I was able to see where the first fictional female prime minister of Denmark (there is now a real one) ascended the steps of the building to make history, at least in the television version. I also sat on a bench in an adjacent garden where Sidse Babett Knudsen, the terrific actress who plays the fictional prime minister, sat and made deals with her male colleagues.

As we walked out of the garden, we spotted two real-life politicians, one who was leader of a minority party and the other the former leader of another party. My friends excitedly pointed them out -- they were walking along the street just like ordinary citizens, no visible security, no big entourage.

Then it was on to the Kronborg restaurant for lunch. Now, I had never been a fan of herring before, but when I tried the "smorrebrod," the traditional Danish lunch of open-faced sandwiches, I became a fan. It was delicious. There was a very old and very elegant woman sitting next to us -- she looked like she had just come back from church she was so dressed up -- and I imagined that she did this every day, had lunch at this lovely little restaurant as part of her daily routine. There is a sense of civility about daily life in Copenhagen, and this woman seemed to symbolize it in my imagination.

I spent the rest of the day just wandering around the city with no special stop in mind. I had coffee at a local "caffe" bar and I sat in the window and watched the bicycle and foot traffic go by. Men, women and children pedaled by, some with backpacks slung over their shoulders, others with large containers attached to the front or back of their bicycles carrying who knows what.

Although the city is compact, you may want to take a taxi to some of the more outlying parts of Copenhagen. There are also boat cruises around the harbor. I did see The Little Mermaid -- who wouldn't if you are visiting Copenhagen! The tour buses were lined up on the road adjacent to the harbor, and people were actually standing on the slippery rocks to get "selfies" of themselves in front of the little 4-foot-tall bronze statue.

Back downtown, I biked over to Tivoli, the famous amusement park and garden first opened in 1843 -- it claims to be the second oldest amusement park in the world. That day there was a tuxedoed men's chorus on the main stage singing "When The Saints Go Marching In" while on an enclosed lawn two male peacocks, their plumage on full display, strutted their stuff in front of a female to the delight of the gathered crowd.

I was persuaded by my friends that a trip to North Sealand (north of Copenhagen), was well worth the time, and it was. I took a commuter train -- the transportation system in Denmark is efficient, clean and direct -- about 45 minutes to Helsingor, also known as "Elsinore" in Shakespeare's "Hamlet." There, Hamlet's Kronborg Castle sits on a promontory overlooking a narrow strait of water. On the other side is Sweden (Denmark and Sweden were once the same country). I took a walk through some of the rooms (costumed actors were reciting lines from the play to tourists) and then walked about 100 yards to the west to the new Maritime Museum, a remarkable structure that looks like the hull of a ship sunk into an old dry dock. In fact, the museum has been constructed in an old dry dock, and it's collection of Danish maritime lore is fascinating and beautifully displayed.

On the way back to Copenhagen -- I made this into a two-day trip -- I stopped off at the Louisiana, the famous museum of modern art about 25 miles north of the city. It's too much to see on a quick trip, but suffice it to say that the collections (Giacometti, Henry Moore, Picasso, Warhol, etc.) are rivaled only by the location overlooking the sea. That, I told myself, I would save for the next trip.

On my last night I stayed at the Radisson Blu Royal hotel, which was designed in the 1950s by Danish architect Arne Jacobsen. Jacobsen also designed the interior, right down to the stainless steel cutlery and the signature Swan and "egg" chairs. Only one room -- number 606 -- remains as it was in the 1950s and 1960s, with green walls and wood panels. Jacobsen actually lived in it for a while.

Before my flight home the next day, I took a final twirl around the city, just for old time's sake. I was not alone as I melted into the busy flow of bicycle traffic in one of the most forward-looking cities in the world. Even after a few days, I felt right at home.