NaCl is a Scandinavian collective of cooks that take haute cuisine experiments out of the high tech kitchens and onto the customer's plates. I sat down at the table at one of their latest events at a ghost haunted medieval castle and came back with memories of a culinary rollercoaster ride.

Based purely on media coverage, one might be lead to believe that Scandinavian cooking is all about the famed Noma restaurant in Copenhagen and it's avantgarde Head Chef René Redzepi. But it turns out there are others who want their share of the limelight waiting in the wings.

Because behind Noma, and behind some of the other two-star restaurants in the region like Mathias Dahlgren and Frantzén & Lindberg, there is a new breed of young cooks waiting to make their mark on the international scene. Most of them with The New Nordic perspective on Scandinavian food as their Alma Mater.

NaCl is an experimental not-for-profit show-cooking concept that is held about every second month in different locations across Denmark (and abroad). It was founded by a group of ambitious young Danish cooks who felt that working the traditional (or even untraditional) gourmet kitchen was sometimes just a little bit tedious, or at the very least kind of repetitive. And as top of the line gourmet restaurants are fine tuned precision tools where nothing is allowed to go wrong - ever - they missed an occasional outlet for spontaneous fun and culinary experiments.

With NaCl they wanted to create a tool for developing their own culinary creativity, a place where they could hang out with a group of likeminded up-and-coming cooks to experiment, talk, discuss, make mistakes and find new inspiration. And they wanted to finance the whole thing by having hard core foodies and willing sponsors pay for the party.

Every NaCl event has its own theme, ranging from "bathroom" to "meat" and just about anything in between. The themes are freely interpreted by the participating Chefs, who all make one dish each for the dinner. They don't compose a real menu, every participant has the right to cook whatever he or she wants - which means that guests can end up having a dinner consisting of 8 appetizers, no main course and 4 desserts. You never know, and until the day of the event, the Chefs don't even know themselves what their colleagues will make, often resulting in last minute changes and improvisation.

- We want to test both our own limits and the limits of our guests, says Nicolai Tram who is one of the founders of NaCl. Here we can do things we've never done before, try new flavor combinations, techniques or just have fun with a specific ingredient without having to risk the reputation of a restaurant. And our guests expect us to try stuff on them. They'd rather eat something challenging, and risk culinary failure, than to be served the same old gourmet food. And we do have dishes that fail, but that also creates an environment where new stuff that is completely astonishing is being invented from time to time, he concludes. 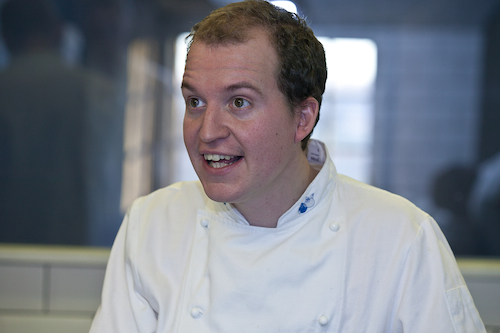 Essentially, where the big names in cooking have their own experimental kitchen where we, the eater, never get to see or taste the mistakes - NaCl has moved the experiment out of the comfort of the kitchen and on to the plate of the guests. A bold move, and not always for the faint hearted eater.

I decided to join NaCl for one of their latest events, at the ghost haunted medieval castle of Dragsholms Slot in western Zealand. An evening where "roughly" 12 courses and a bulging open wine bar was on the menu. Nothing else. Visitors just got a starting time and a place. The theme for the event wasn't disclosed in advance either, but considering the haunted surroundings, it wasn't far fetched that we would be in for a slightly scary culinary ride. 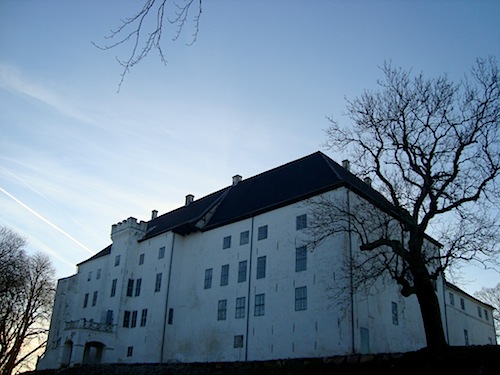 The mood at a NaCl event is very laid back, and the Chefs are quick to make all the guests feel comfortable. Far from the stiffness of traditional haûte cuisine dining, we are encouraged to ask questions and comment on the food. Dishes are plated in front of the guests, and the creator of each dish talks us through both the conceptual idea of the dish and the cooking process.

It is almost impossible to do a chronological walk through of an evening with NaCl, as the experience is so different from traditional restaurant dining. There is no obvious starting point and finishing line. But the dishes range from surprisingly restaurant-ready to half-shockingly experimental. In the former segment, we get a deliciously smooth licorice Turbot, served with Pernod purée, blood orange, apples and braised fennel. Another one is the main dessert from Dragsholm Slot Head Chef Claus Henriksen, a smoked milk ice cream served with quince syrup, pear toddy and caramel. Absolutely delicious. And in the latter segment, three dishes stand out. First the blue cheese in fat from Bo Lindgaard. A combination that puts even the most fat-loving (yours truly) eater to the test. Strong blue cheese and fat are whipped together and served with mashed boiled vegetables in something I can only describe as a blue cheese flavored mix of remoulad and butter. Surprisingly, it tastes great - even if the portion is absurdly over sized. 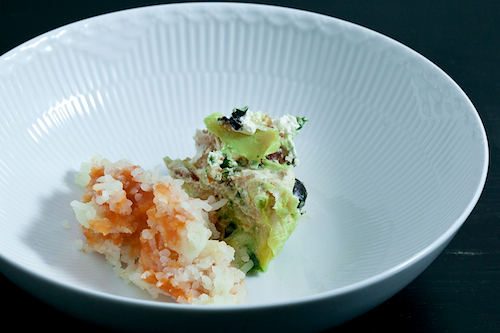 Secondly the Tartare. Created by Anton Eff, who used to cook at WD-50 in New York, you can certainly see the spirit of Wylie Dufresne in the dish. At first glance, it is a classic beef tartare. But instead, it is a tuna tartare with seaweed capers and a faux egg yolk made from Miso. The dish is so incredibly well done visually that it is almost impossible to tell the difference from a traditional tartare unless you know what to look for. 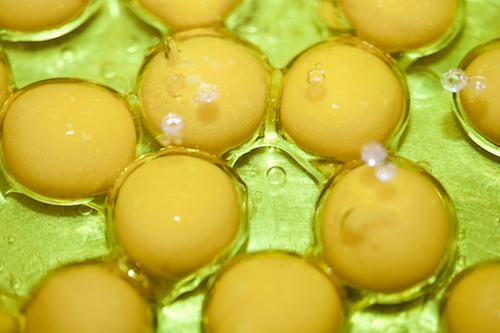 But the most challenging, and the most theatrical serving of the evening is the one created by Nicolai Tram himself. And even if the dish itself isn't exactly delicious, the presentation and culinary concept turns the dish from food to physical and mental experience. We are all asked to leave our seats, and accompany the waiters across the courtyard into the old castle church. The church is pitch black, and the only lights come from the small headlights some of the Chefs are wearing. We are asked to take a seat in the benches, and are then served a dish inspired by nothing more and nothing less than death. Yes, death. On a black granite plate, what looks like (the little we can see in the dark) gelatinous cerements cover a grave like pile topped with inscripted parchment paper and dirt. Cutting into the dish feels like being a grave-robber, and eating it is sensationally strange. It turns out, the dish is a rather simple beef tartar mixed with Jamon Serrano, with edible paper and toasted rye bread. But the eery experience of "eating death" in a pitch black medieval church in a haunted castle will be up there with any major culinary experience I have ever had. Chef Tram certainly knows how to put up a show and push boundaries. 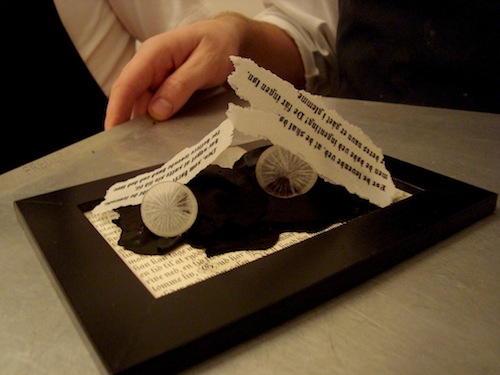 Back in the dining room, and as the "help yourself" wine bar is more and more frequented, the atmosphere gets even more casual, and conversations are struck left and right between hard core foodies, politicians, journalists, financiers, restaurant professionals and regular Joe's that in many cases don't have anything else in common than the love for good food and wine.

Towards the end of the evening, the Chefs come back out into the dining room and seat themselves among the guests. After a couple, or more than a couple, of glasses of wine and the friendly treatment from the Chefs, we feel like we're also contributing to the experiment just by being there. Culinary conversations are started across the room as the Chefs engage in honest and open talk about food, recipes, restaurants and just about anything else. This is the kind of way you wish that all gourmet experiences end, isn't it? That the Chef brings out and extra bottle of wine, and sits down for a one on one - genuinely interested in what you thought about the food - or perhaps just where you're going on vacation this summer.