Cordova, AK -- Bill Webber and Bill Bailey are two longtime residents of Cordova, Alaska, whose livelihoods, and way of life revolve around the fishing industry. As we see in the video, both Webber, a third generation Alaskan fisherman, and Bailey, one of the founders of Copper River Seafoods, a local seafood processing plant, harbor a deep respect for their way of life, and for the natural environment. 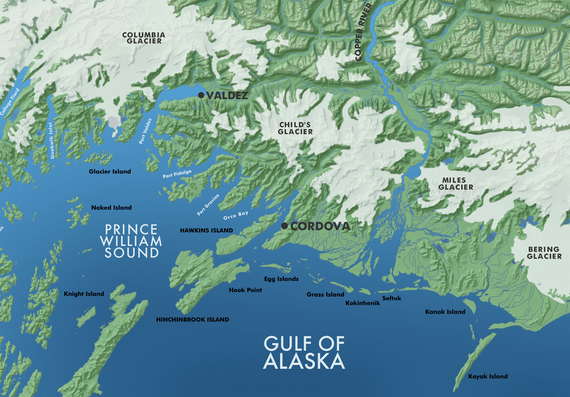 The salmon spawning riverbeds and interconnecting tributaries that feed into the 300-mile long Copper River flows to the Gulf of Alaska. A vast contiguous wetlands is also part of the 27,000 square mile Copper River Delta Watershed. This watershed supports the natal streams where the beginning and ending salmon cycles take place. Salmon are migratory creatures, they spawn in freshwater riverbeds, mature to a certain age, migrate to the ocean for a few years (the actual number of years varies by species), before returning home to spawn, and die.

It is this special ecosystem where the natural world and a regional economy entwine. A symbiotic relationship -- born out of necessity -- but designed to nurture and sustain the salmon fisheries of the Copper River and Prince William Sound region. There's also a political component that requires governmental oversight and science-based resource management in order to protect the fisheries from over harvest, and from environmental degradation.

Cordova, Alaska, is situated 150 miles east of Anchorage on the southeast portion of Prince William Sound. Its permanent resident population of roughly 2300 may as much as triple in size during the commercial summer fishing season. To the southeast, Seattle is a distant 1300 miles away.

There are only two ways into Cordova: by ferry boat, and by plane. During the summer months there's as many as 20 hours of sunlight; conversely in the winter, as few as several hours of light. It takes a special person to live year-round in Alaska, and like other coastal cities here, commercial fishing is the lifeblood of the community.

Bill Webber is part of an established fishing family dating back to the late 1800s, or early 1900s, when his grandfather as a 12-year-old boy made his way independently to Alaska from Holland. He spent his entire life salmon fishing in the Prince William Sound, hunting, and otherwise living off the land.

Bill began fishing on his father's boat in the mid-1960's, at age 7. His father had been a salmon seiner, and salmon gillnetter, and also fished for herring and crab. At 19, Webber started fishing on other boats, and fisheries in the summer and winter, throughout the year. "In my younger years -- my 20's -- I used to crab fish in the winter, fish herring in the winter months," Webber explains.

One of the ways that Alaska's fisheries are protected by the state from over harvest, commercial fishing permits are issued in a finite number for all "types of gear, the optimum number of entry permits for each administrative area". The Copper River and Prince William Sound administrative area permits for gillnet fishing are about 574, though this reported number fluctuates slightly based upon different sources.

Today, Bill Webber fishes only for salmon in the Copper River Delta and Prince William Sound.

"My fisheries pretty much happens in the summer months from mid-May to the end of September. I started my other business, my winter business, which is a boat building and fabrication [shop]. This boat you are on right now, I built 2 years ago -- designed it and built it -- and I've got a lot of boats in this [fishing] fleet that I have built, and a lot of deck work".

A couple of years ago, Bill lost his previous boat while passing through one of the bar entrances on the Copper River Delta in the Gulf of Alaska, a testament to how dangerous commercial fishing is, even for those like Webber with decades of marine experience.

"It was kind of a fluke set of [conditions], a series of big waves that came through when I was making a judgment call. It shouldn't have happened but these things do happen, and here I was 43 years into the fishing game, and it finally happened to me."

"I felt like part of me was gone. Our boats are our tools. It's how we make our living that they are extensions of us. You can look at a boat, and how it's set up can tell you about that person, that person's abilities, what they are doing. Things do happen, and so it can be very dangerous," says Webber.

We are on Bill's new boat, the Paradigm Shift, heading toward "the flats", in the Gulf of Alaska near the mouth of the Copper River. Also on-board, are Bill's wife Lori, and his regular deckhand, Todd Blaisdell. Since we are in between runs, most of the Sockeye have passed, and the Coho have not quite arrived, we are here to experience what it's like gillnet fishing, and for filming purposes.

There's not a whiff of danger in the air, the water is almost smooth as glass, and although there's wind, it's mainly from the speed of the moving boat. As Bill Webber looks out at the water, I ask him what he looks for when he's fishing.

"I look at the water. I know this geography, I've fished here all my life. We look for tide rips out here. Usually when the tide's coming out, you end up getting these tide riffs that form out here in the water. Sometimes there's color differences. They'll be some darker water and green ocean water, and that's usually evidence of a pretty active tide rip. The fish will congregate right in those little corridors..."

Commercial fisherman are farmers of the sea. They don't plant seeds in the soil, they harvest from the bounty of the sea. Bill Webber tells us what being a commercial fisherman means to him, "fishing is... a way of life. It's something we always look forward to every year and through my tenure, we've had ups and downs just like any industry does. We experience good times and good years and bad years and bad times." ..."It's what I grew up with. It's what I know." Webber explains that everything he learned in life about building boats, the electrical and wiring components, hydraulics, manufacturing, welding -- he learned because he was a commercial fisherman. "it's takes a mechanical mind to want to learn these things."

The boat stops, and the net is reeled out. I stand on the bow looking at the nets resting on the water, as we wait for the sign they will be reeled back in. Aside from the financial rewards, I can almost imagine what it must feel like to reel in a sizable haul from a spot of ocean with my nets extending out just 900 feet.

Bill Webber recounts this story that may be telling:

"I remember one time, there were 25 boats. We're fishing this tide rip line out there. There was a brown water and a green water [forming], a real definitive line. And I had 200 fish that I caught in my set, and the guy to the east of me had seven, and the guy to the west, had five. That's what we all want [he laughs], to be the lucky one."

Originally posted on Cooking Up a Story.