Today is the second day of "Copyright Week!" Talk about a lede. That sentence has all the inherent excitement of "Periodontal Health Awareness Week" or "'Hug Your Proctologist! No, After He's Washed His Hands' Week." And that's a shame. Copyright Week is a week devoted to our relationship with our own culture. Hint: things aren't going well. The relationship is on the rocks. And the problem doesn't lie with us. In all honesty, we need more space. We need to start seeing other futures. Because the shape of our copyright laws affects our networks of search and speech. Frequently, it determines our access to cultural objects, educational materials and scientific literature. It shapes the way music and documentaries are made (or not made). It can even determine the way that our technologies develop (or don't.) So this is important stuff. Maybe we should pay attention.

Copyright week has a daily series of themes. Monday was transparency, the utterly radical idea that we should make important decisions about culture and technology openly. As I wrote in the Financial Times back in 2010,

Those of you who use that useful communications network known as "the Internet" might be interested to know that a treaty that could profoundly affect your rights is now being negotiated by a group of developed states including the United States and the EU. What is in the treaty? Well, that is something of a mystery. The treaty in question is called ACTA, the Anti-Counterfeiting Trade Agreement. When Knowledge Ecology International filed a Freedom of Information Act request for the draft of the treaty, the Obama Administration refused, claiming that this was "information that is properly classified in the interest of national security.

National security? Must can imagine Jack Bauer or Carrie Mathieson, Glock leveled, telling us to move away from the Trade Agreement's provisions on copyright infringement, or drug patents? "Step away from Article 1, sub para 4 or I shoot!" It would be funny if it wasn't sad. ACTA died, thanks to unauthorized leaks and pressure in Europe. The office of the United States Trade Representative -- which truly has behaved shamefully, assuming one believes that public servants should serve the public -- is back at work, however, negotiating a new agreement called the Trans Pacific Partnership Agreement. That agreement, too, is classified and again we know about its contents only by leaks -- leaks that may expose the leakers to criminal penalties. Great way to have a democratic dialogue. As Senator Elizabeth Warren commented,

What a radical firebrand she is! Democratic accountability! What's next? Demands for empirical evidence that our policies are a good idea?

January 14 2014, Tuesday of Copyright Week, is devoted to the public domain -- the material that is free for all to read, share and reuse without permission or fee. I've written a book about how important the public domain is, (you can download it from here, free. Thank you Yale University Press!)

I won't try and repeat all those arguments in this space, but here is just one. When this nation was founded, works went into the public domain after just 14 years -- which turns out to be pretty close to what economists estimate is the economically optimal copyright term. Even as late as 1976, you only got 28 years of copyright protection, renewable for another 28 years if you wished. 85 percent of all copyright holders and 93 percent of authors did not renew. It was not worth it. But we kept renewing the copyright term and we did so retrospectively, sucking vast swaths of culture into copyright -- frequently stuff that was commercially unavailable and where the author could not be found. No one benefited in other words. Copyright functioned entirely as a fence -- barring entry but conferring no benefit.

Every year, my Center at Duke does a study of what would have entered the public domain, had we kept our old laws.

This what could have entered the public domain on January 1st 2014, if we still had the copyright laws we had in 1976. 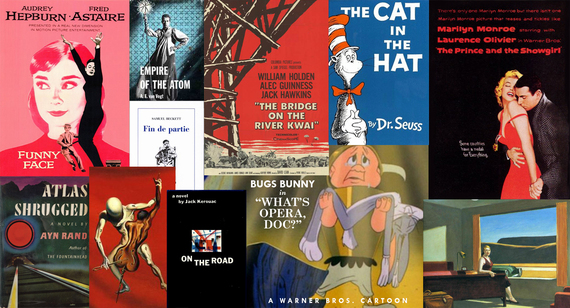 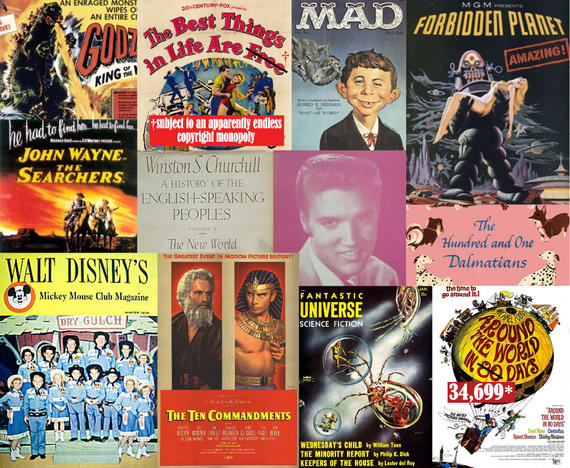 The sad thing isn't even that a majority of our Supreme Court doesn't believe that the public has any legally cognizable interest in the public domain. The sad thing is not that we did not receive those works on the day copyright had originally determined they would enter the public domain. These famous works actually still are available -- we can get them, just at a higher price and under more restrictions than we should have to bear. The sad thing is all the unknown works we have denied ourselves, for no good reason at all -- torching our cultural heritage as effectively as anything the firemen in Fahrenheit 451 (a book that should have entered the public domain in 2010) could ever have done.

Now that is a tragedy. And perhaps good reason for us to take notice of Copyright Week. We need to start seeing other futures -- because this relationship with our culture isn't turning out too well.