Imagine if the reefs of the world, once coated by colorful corals, suddenly became bare. What would it mean for humanity?

I reached out to Dr. Stuart Sandin of the Center for Marine Biodiversity and Conservation at UC San Diego's Scripps Institution of Oceanography to learn more about coral reefs. These complex ecosystems are threatened by human activities like overfishing, pollution, and climate change.

In an interesting twist, we can learn a lot about the paleoclimate by studying corals. Ironically, the very organisms that can teach us about climate science are being threatened by climate change.

Learn more about coral reef conservation by clicking the link below and watching the video above. And join the discussion in the comments section below. Come on, talk nerdy to me!

STUART SANDIN: You have seaweed that shares space with corals. You have fish that are using all the spaces inside the corals. That entire framework is filled with organisms, it’s breathing with organisms--crabs inside of it, you have worms, shrimps, octopus, squid. Everybody’s living in this one ecosystem.

CARA SANTA MARIA: Hi everyone. Cara Santa Maria here. And that’s Dr. Stuart Sandin from UC San Diego’s Scripps Institute. He told me why coral reefs are important, and what losing them would mean for humanity. See, all that biodiversity is in danger, and sadly, we are the primary source of that danger, from overfishing to pollution, and of course, climate change.

SS: So climate change changes the basic environment in which these organisms live and it turns out corals are fairly sensitive organisms and if you stress them environmentally and then you add some added nutrients and then you remove all of the organisms that could have accounted for some of those pitfalls, the fish, it’s a recipe for disaster. And because of these cumulative and interacting impacts on coral reefs we’re watching a lot of them change, change in ways we don’t want them to change, and that’s what we’re calling the death of coral reefs.

CSM: In order to understand how coral reefs can die, we first must appreciate how they live. And their physiology is fascinating.

SS: Algae inside the coral take sunlight and allow an animal to act like a plant, to take that sunlight and turn it into productivity. Well that symbiosis--one of the most important symbiosis on a coral reef--is very thermally sensitive. That means if the temperature gets too high the coral either kicks out the alga or the alga abandons ship. That much we know. It's a process called coral bleaching, it’s bleaching because once that alga is gone, the coral now looks white.

CSM: And if corals bleach, not only do they die, but their reefs can no longer support life the way they did when they were vibrant, colorful, and healthy. And what happens when this is widespread? What would it mean to live in a world without coral reefs? And how can we make sure that doesn't happen?

SS: Coral reefs are an ecosystem that provide a lot of benefits to a lot of people. They provide food for a lot of people, they provide shoreline protection, they provide species that are providing us with new drugs. You know, every year a new species are found that provide new drugs for people. They provide income for communities that have dive tourism nearby. There are a lot of people that get a lot of benefits out of them. The goal that I see for finding new management, finding ways that we can keep coral reefs anywhere near their assemblance as they are today, is really to keep these services around--to keep people fed, to keep us finding new species, to keep people using coral reefs. So the goal in no way is to omit people from the equation, but instead to find a future where we have the environment facilitating humanity rather than standing in opposition to humanity.

CSM: What do you think we can do to save the coral reefs? Sound off on Twitter, Facebook, or leave a comment right here on The Huffington Post. Come on, talk nerdy to me! 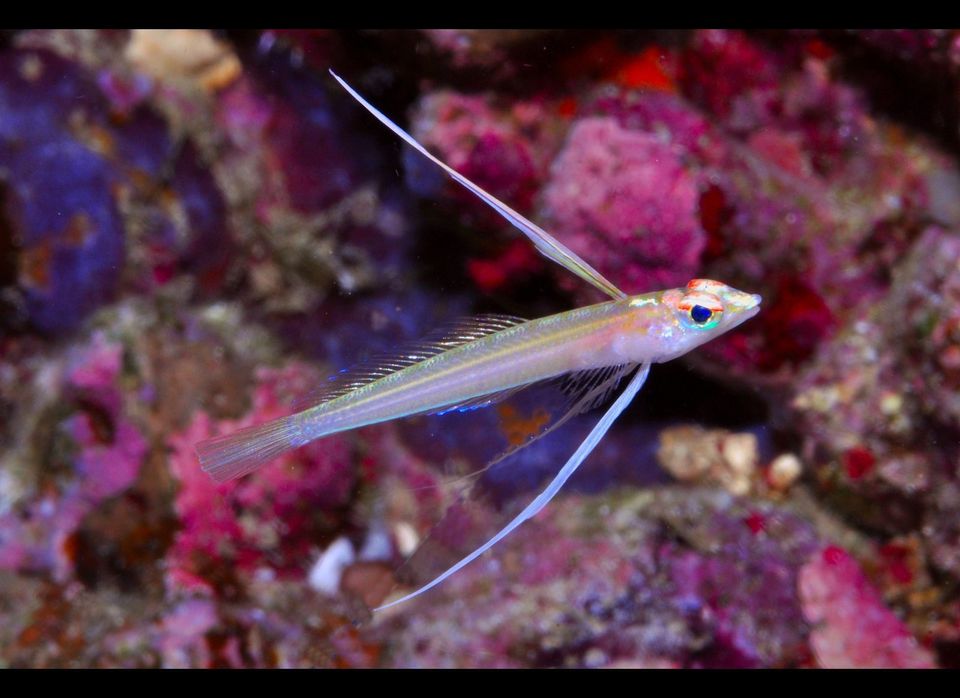 1 / 28
NEW SPECIES: Pterapsaron longipinnis - A deep reef species (below 60m depth) discovered in Cendrawasih Bay in West Papua; the name refers to the unusually long pelvic fins which this fish uses to rest on the bottom in tripod-like fashion.
© Gerald Allen