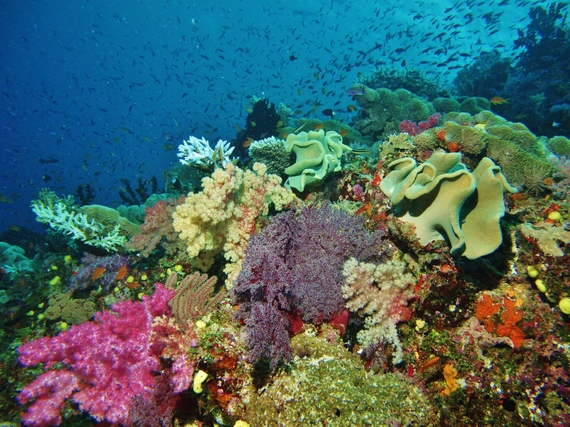 Long before the first dinosaurs walked the earth, before the first flower bloomed, and before the first bird took flight, coral reefs flourished in tropical oceans. Since then, coral reefs have proven that they are one of the most resilient ecosystems on earth; surviving everything nature has thrown their way. That is until we hit the scene. It has taken only about a century of modern humanity to put coral reefs on a collision course with extinction. And the recent election results in the United States suggest that we may be getting ready to hit the accelerator.

The biggest risk to coral reefs is climate change. Already, coral bleaching is devastating reefs worldwide, which happens when the water gets too warm for too long. Many reefs have experienced three years' of bleaching in a row, and as the climate continues to heat up, we can expect the frequency of these events to increase.

Corals are the architects and the foundation of the reef. Everything that depends on reefs is tied to the fate of corals. As corals decline, millions of life forms--from seahorses and butterflyfish to octopuses and sharks--are at risk. Millions of people also depend on reefs for food, income from fisheries and tourism, and even the very existence of their coral islands.

Fortunately, there is a global movement to take action. Last year in Paris, the Convention of the Parties (COP21) agreed to aggressive targets on carbon dioxide emissions aimed to limit global warming to well below 2oC. In October of this year, 170 countries met in Rwanda where they successfully negotiated an agreement to eliminate 90 percent of hydrofluorocarbons, which are also contributing to global warming. And right now, COP22 is underway in Morocco to discuss what actions to take now that the Paris Climate Change Agreement is entering into force.

But these international agreements are politically fragile. Unfortunately, President-elect Trump's plan for his first 100 days indicates that he will seek to undo them. We urge the newly forming administration to reconsider this position. After all, climate change is not about some hypothetical future; it's happening today. For example, global sea levels rose about 17 centimeters (6.7 inches) in the last century, and the rate of increase doubled over the past 10 years. Nine of the 10 warmest years on record have occurred since 2000. Last year was the warmest of all, and it looks like it will be surpassed in 2016.

What's at risk if we don't unite globally to address climate change? Coral reefs are especially vulnerable, but their experience is not unique--all species are at risk when their environment changes rapidly. And our species is not immune. We are already getting a glimpse at how a shifting climate can undermine human prosperity. Extreme weather events such as storms, rising sea levels, and increasing temperatures can affect our food production systems, our access to potable water and even the air we breathe. We can also expect negative impacts to human health.

We know what's happening to our climate and we know why. The main question now is what will we do, what choices will we make to address climate change as a nation and across the world?

For us, the answer is clear: we must continue to unite communities to save coral reefs. First, we need the global community to mitigate climate change via international agreements like those coming out of COP21 and those advanced through COP22. But equally importantly, we need to address the local threats to reefs by helping communities build healthy fisheries, create clean water for reefs and increase their capacity to manage and sustain their livelihoods. Together, we can vastly improve the chances that coral reefs will thrive for generations to come.