For people who live near rural areas, nothing says late summer or early fall like the corn maze.

Pack up the family or friends, drive out to a nearby farm and start exploring a labyrinth made in a cornfield.

If you're extra lucky, your maize maze -- as they are called in England because "corn" is the term used for wheat -- will have a cool design modeled after Harry Potter, Napoleon Dynamite or the Statue of Liberty.

To city slickers, a corn maze can seem, well, corny; like an outdated form of entertainment from a bygone era when people spent their leisure time at taffy pulls and ice cream socials.

But, amazingly, corn mazes have been growing in popularity for the past 15 years and, according to family farmers like
Rick Lattin in Fallon, Nev., they can add a lot to the bottom line.

"If I planted three acres of corn, I could probably get 100 tons of corn that I could sell for around $10,000," Lattin told HuffPost Weird News. "But if I turn that three acres into a maze, I can earn around $50,000. Using the land that way allows small farmers like me to keep going."

Lattin -- who calls himself a "corn maze early adopter" -- doesn't make the mazes himself. He hires companies like The Maize, a Salt Lake City, Utah, business that, since 1996, has done a few thousand mazes, including more than 200 this year.

The company charges between $2,000 and $10,000 for each maze, and while customers like Lattin don't design the labyrinths, they do provide input as to what they want.

Lattin has used that prerogative to make bold statements with his corn mazes. For instance, last year's theme was "Know Your Farmer, Know Your Food," a visual riff on a program created by Kathleen Merrigan, the deputy undersecretary of the USDA, which tries to get consumers to be more aware of the sources of their food.

"She told me this was the best promotion of the program she had ever seen," he said proudly.

But while the bird's-eye view of a corn maze should be eye-catching, Lattin said that the maze is actually becoming the selling point.

"I get a small percentage of repeat customers who want to know the theme, but as the maze market has improved, the aerial view has become less important," he said.

That's an opinion shared by Kyle Vesperman, a fifth-generation farmer from Lancaster, Wis.

That's easier said than done, according to The Maize designer Logan Branch.

"When you're doing a maze, you have to take the size of the field into account as well as the shape -- Is it square? Rectangle? Odd-shaped?" said Branch, who will have his hand in 101 mazes by the time the season ends in early November. "Also, does the customer want a logo or an object?"

That can be a challenge, Branch said.

"Pumpkins are easy," he explained. "A pumpkin can be altered in different ways and still look like a pumpkin, but, say, the letter 'r' isn't as flexible. You start changing that and, pretty soon, it doesn't look like an 'r' anymore."

Branch said the strategy behind his maze designs is proprietary information, and considers himself more of a graphic designer than an artist. Yet he does get artistic satisfaction from the mazes -- even though they only last for a few months.

"That's part of the appeal," he said. "It's a temporary form of art, like the leaves changing in autumn."

Lattin says he understands why corn mazes could be appealing to a certain artistic sensibility.

"There is a corn maze designer from Great Britain named Adrian Fisher, who is a real artist, who has designed castles and such," Lattin said. "When he started doing mazes, he thought he had died and gone to heaven because he had a chance to do a new design on a new field every year."

Fisher himself compares the art of corn mazing to the judging of ice skating "where there are six points each for artistic impression and technical merit."

"For me, I consider they are more of an art, in the sense that, like approaching a piece of sculpture, it is a transforming experience for the visitor, as they engage, become involved, gradually discover hidden aspects, and then find that their perception changes, of the three dimensional reality they find themselves in."

Fisher designed many different mazes in many different mediums -- such as hedges -- before moving to corn and creating the world's first corn maze at Lebanon Valley College in Pennsylvania in 1993. Since then, he has designed more than 400 corn mazes.

"The advantages of a maize maze is that you can create mazes on a larger scale than ever before," he said. "Being an annual crop, it can also have a new design every year; and thus a new storyline and theme each year, complete with actors, costumes, soundtracks, scenery, keynote features and special effects."

However, there are design constraints, such as not being able to install permanent and expensive landscape features, stone towers, underground tunnels, grottoes and extensive water features.

Still, he said corn mazes combine a great design challenge for the artist and a wonderful experience for the visitor, which is why art experts like writer Robert Pincus, of the Museum of Contemporary Art San Diego, believes they should be considered art -- especially because they work as entry points for people who don't realize they like art.

"They are so accessible and well-done that they allow people to have an aesthetic experience without realizing it," he said. "Works like these -- which might be called 'outsider' or 'accidental' art can remove a barrier that really shouldn't be there in the first place."

New York magazine art critic Jerry Saltz said corn mazes fall into a category called "Earth Works," which use Mother Earth as the medium. However, he said he'd like to see the maze makers take more chances, even if it means, like the people walking in the maze, they get lost a bit.

"Other than a corn maze I once saw of Larry King, all of the mazes tend to be very conventional," he said. "I'd like to see one that mutated the form. Art tells you things you need to know but didn't realize you did. Corn mazes need to take more risks. Otherwise, they're just amusement park rides -- which, to be fair, can be enjoyable."

Brett Herbst, who found The Maize in 1996 and has created hundreds of mazes in his own right, said the artistic value is more important in big fields, while the maze takes precedence in smaller fields. However, he insists that the true emotional impact of a corn maze -- the thing that any "art" is supposed to inspire -- does not come from the cornfield or the maze.

"Really, the true value is not the cornfield," he said. "It's the experience of being together with family and friends. No one goes to a corn maze by themselves."

Corn Mazes Can Be A-maize-ing -- But Are They Art? (PHOTOS, VIDEO)
Amazing Corn Mazes 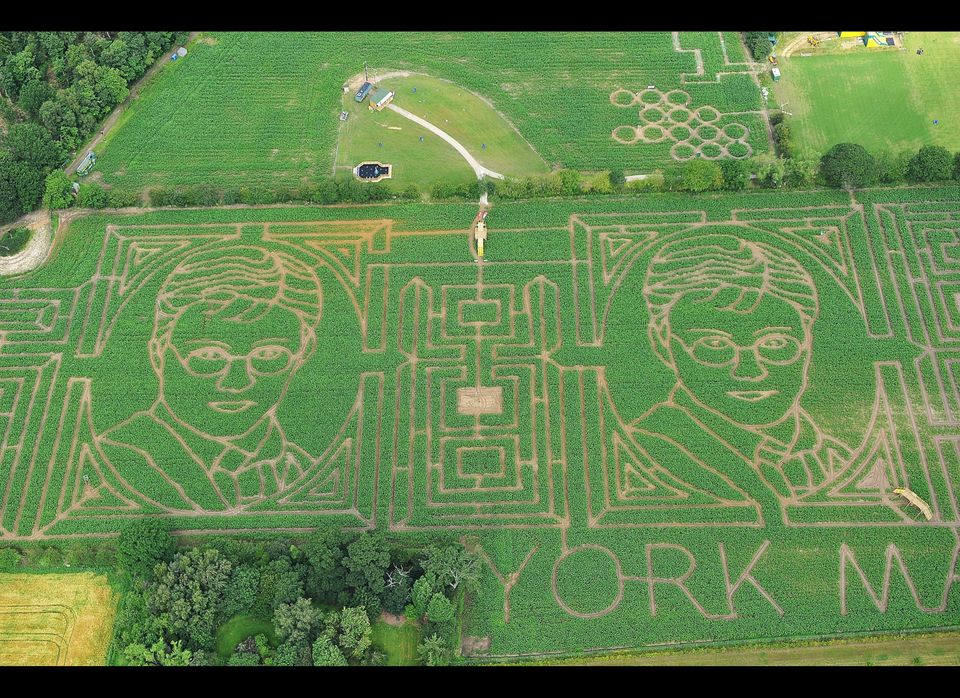 1 / 8
Amazing Corn Mazes
In the last 15 years, corn mazes have become a popular way for farms to make money both in North America and Europe. In fact, a corn maze can earn up to five times more income for a farmer than if the land was devoted to growing corn for consumption. In order to attract attention, farms will go for any hook possible, including this Harry Potter maze which was recently built by farmer Tom Pearcy in York, England.
Bethany Clarke/Getty Images