It had been an antique store, then a junk store, then a hideous hangout for Thunderbird-sipping neighborhood workers. Since 1977, the location has been The Cornelia Street Cafe, an elegant West Village magnet for an amazing array of artists. It has become a New York institution, having won numerous awards for its superb food (Check Cornelia Street Cafe's Christmas and New Year's Eve prix fixe menus here) as well as its lineup of varied cultural programming.

At its heart, Cornelia Street is an artist's cafe, and the womb of this spirit lies in its narrow, colorful basement. In this open, public venue, performers of all kinds, professionals as well as part-timers, express whatever passion they possess. According to Cornelia Street owner Robin Hirsch, the space hosts about 700 shows each year and stages poetry and spoken-word in no less than 14 languages. It is one of Downbeat magazine's 100 Great Jazz Clubs of the World and among All About Jazz's Top Five Jazz Venue in New York City. Upstairs, the restaurant presents a new visual art exhibit every month.

Singer-songwriter Suzanne Vega and rock band The Roches started out there, as did Eve Ensler's Vagina Monologues. Dr. Oliver Sacks read his prose there several times, and Nobel Laureate Roald Hoffmann presents a monthly Science Series. Members of Monty Python and the Royal Shakespeare Company perform there too. 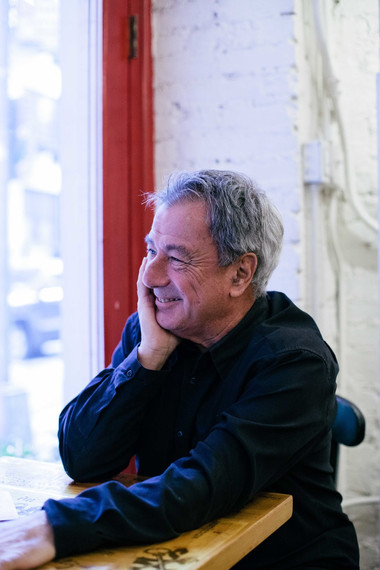 Indeed, Cornelia Street is a cultural crossroads. This fact is behind the title of the forthcoming book Robin Hirsh is still writing, The Whole World Passes Through: Stories From The Cornelia Street Cafe. Here's an exclusive excerpt:

". . . Inside the café, locals, having found a place where no-one would move them on, would nurse their steamed eggs or fresh squeezed orange juice or chinotto until somebody they knew or would like to know showed up or some more pressing appointment called. Actors in particular would hang out for hours, studying or perhaps pretending to study, a script and, oddly, for so notoriously gregarious a profession, rarely talking to anyone. I would come out from behind the bar, give them a menu, return to my post, wait the appropriate amount of time, come back, take an order, return to the bar, prepare it, assemble it on a tray, deliver it, and later, sometimes much later, present a check, wait the appropriate amount of time, collect, and return with payment, and more often than not, scarcely a word outside the immediate transaction would pass between us. Despite my life in the theatre--or perhaps because it was so delimited by experiment and the boundaries of Off Off Broadway--I had no clue who was well-known and who wasn't. I had had a long and arduous relationship in England with an actress and director in England some ten years before, named Glennis, who was known as Glen, a completely unknown name for a woman. One day, surveying my smattering of customers from behind my bar, I was staring at the back of a blonde head of a beautiful woman who was completely absorbed in what she was reading. I slowly became convinced that here, ten years later, over from England to direct a show, was Glen Walford, now founder and artistic director of the Bubble Theatre in London. Unable to contain myself , I walked up behind her and said quietly, "Glen?" Startled, she turned round, "Yes?" The face was not the face I was expecting. "I'm terribly sorry, I thought you were someone else." I blushed, she looked at me quizzically and returned to her papers. Charles, who happened to come in at that moment, and who was much more au fait about such things than I, whispered to me behind the bar, "You know who that is, don't you?" I shook my head. "Glenn Close." " Glen . . .?"

Perhaps it was as well that I was so uninformed -- Raphaela was perhaps even less informed than I. It meant that well-known people from all walks of life could sink into anonymity here. Just as other locals could be sure that no-one would come up and ask them to order something else, so Glenn Close and Harvey Keitel and Robert de Niro could sit at their separate tables, secure in the knowledge that nobody would come up and ask for an autograph. It wasn't until three or four years later, when we had taken over the place next door and expanded into two rooms and built a kitchen and graduated to washing dishes in a machine, that our dishwasher/porter/general factotum, Carlos, actually started to talk to de Niro. De Niro had moved now to the side room, and instead of reading was writing. Quite affably, he and Carlos would chat. Carlos would report back that de Niro had bought a building in what was coming to be called Tribeca and was thinking of opening his own restaurant and what he was writing was notes. On mornings off, Carlos would go down and help him, apparently just the two of them, with cleaning and lifting and moving stuff around. And after a much longer gestation period than ours -- and to much greater fanfare -- de Niro eventually opened the Tribeca Grill, together with a bunch of buddies, like Baryshnikov and Chris Walken and Dan Akroyd and other luminaries, all of whom, unbeknownst to me, had passed through our much less prepossessing portals . . . "