There's entre nous. There's entre' cote. And then there's entre-preneur. Just like the intimate just between us (entre nous) phrase and the succulent rib-eye (entre' cote), the image of the entrepreneur is seductive, mysterious: the Risk taker. Pathfinder. Quest-maker. Entrepreneur: from Old French, to undertake.

We visualize entrepreneurs undertaking the extraordinary, the above average, beyond the horizon. The creative, out-of-the-box thinkers. The geeks, the nerds, and even the cool kids. The dreamers and do-your-own-thing rule breakers. Think tycoons like Rockefeller and Carnegie. Hollywood moguls Warner, Mayer, and Goldwyn. Modern day Gates, Jobs & Zuckerbergs. Girl Gurus from Ariana to Oprah. A tad of the rebel and the renegade. The world of the maverick.

I recently got a glimmer of that world at Cornell University's 4th Entrepreneurship Summit (http://summit.eship.cornell.edu/2015/). 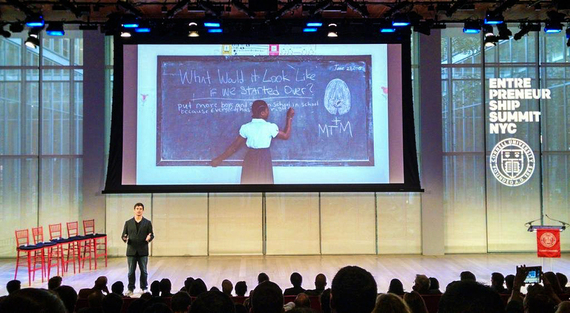 After all, I'd always had a touch of the entrepreneurial poet. At 5, I created a talking backwards game called ZAZ. At 14, I championed the all-girl Ladybugs & Limericks Club in middle school (combining my girlfriends' love of science and rap). As a Cornell freshman in 1970, I was the first female President of the Organic Foods Society before anyone could spell granola. My Mom and I concocted weekly inventions like the eyeglass windshield wiper. Now I wanted to understand how to take raw concepts to the next step.

So, on an a-typically balmy 75º day in November, over 450 wide-eyed innovators poured in to New York City's Times Center to absorb some entrepreneurial insights, anecdotes and words of motivation. I thought I'd heard it all, from Aristotle to Zen. Guess I was wrong.

Life-Changing: from Beyonce to Bēhance
Forget the marathon. Some of us never stop running. These are the starter-uppers, the restless, the let's make an impact-ers. Tiny embryo ideas evolving into giant organisms, from Scott Belsky's creative Bēhance (http://www.behance.com) to diva Queen Bey's vegan delivery service (http://www.22daysnutrition.com).

Swing Your Partner
Is it a start-up or a square dance?! I can almost hear the country fiddlers as CEO's and Execs do-si-do their partners -- students in diverse fields of engineering, design, law and architecture. Cornell University pulsates with a glowing eco-system of entrepreneurial spirit, both downtown and on campus. I practically need an Excel spreadsheet to keep track of all the alliances, partnerships and interconnections of entrepreneurial endeavors. I bumped into some eager LCL staff (Life-Changing Labs) champing at the creative bit (http://www.lifechanginglabs.com).

And let's not forget the Dyson School of Applied Economics & Management (http://eship.dyson.cornell.edu/) that crosses paths with LCL, both of which intersect with Southern Tier Startup Alliance (http://www.ststartup.com/) which merges Binghamton, Corning and Ithaca resources. Where's that dance floor?!

From Chia to Chi: Dorm-ist to Non-Conformist
From sophomore Alex Strauch's born-in-the-dorm artisan snackables (http://www.cayugacrunch.com ) to beyond the norm Malia, Queen of the badass bikinis (http://www.maliamills.com). Alex started in his freshman dorm, with nuts, nibs, coconut chips and chia seeds; now blending cinnamon, maple, and pecan into pizzazz-y Aztec Energy and Colonial Hipster flavors. The Diana von Furstenberg of the swimming pool, Malia chants the feminist body mantra Love thy Differences. She "gives good chi," from chee-tah prints to chi-jacks (cranked up midday cardio). It's a "well-behaved bikinis seldom make history" philosophy. Malia says the customer is not always right. Get ready for a Change Your Ass attitude. Feel like a rock star.

According to aspiring entrepreneur Strauch, however, there's no overnight rise to the Entrepreneurial Rock 'n Roll Hall of Fame. Sure, it's thrilling, but also "emotionally tough and discouraging." I say, "Get that honest entrepreneur a martini!" 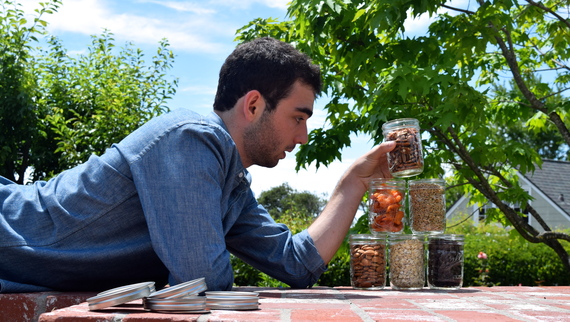 Shark Tank to Think Tank
Yup, it's baseball season. The pitches were flying -- and I don't mean from outfielders. Hearing the judges perched on their barstools critiquing the fearless presenters, I almost wished it was cocktail hour. Carlos Opina opined on his think squink and tech legos -- all part of a desktop electronic circuit factory (http://www.botfactory.co).

Descartes & Dean Dutta. I think, therefore I am ...an entrepreneur.
Soulamitra Dutta, Dean of Cornell's Samuel Curtis Johnson School of Management (http://www.johnson.cornell.edu) speaks of merging the worlds of academia with business -- of creating an entrepreneurial eco-system in NYC at Cornell Tech (http://tech.cornell.edu), where students drive the agenda. It's all about Performance Learning by doing, connecting theory to real life.

Start-Ups to Art-Ups
1 picture is worth 1,000 entrepreneurial words. Heather Willems used colorful magic markers (http://www.imagethink.net) to illustrate the speakers' points in real time. Maybe it's just me, but I've always preferred the power of the pen to PowerPoint! 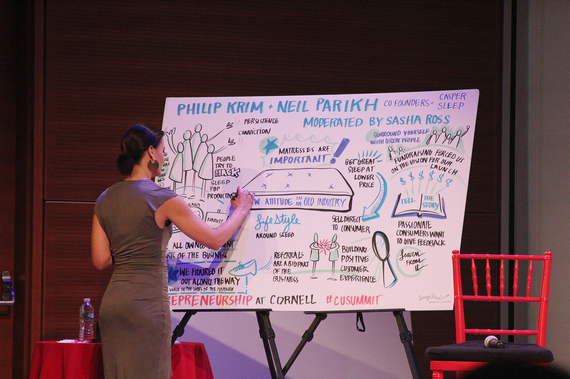 Intuitive Outlaw: IEX Marks the Spot
Brad Katsuyama, a join-the-crowd, team people-pleaser, soon wanted out of Royal Big Bank-dom. Restless in Canada, he asked, "What next?" A closet outlaw, he was out to disrupt Wall Street, build his own stock exchange. His discovery? Regulation always has loopholes. Result? IEX (http://www.iex.com). Plucked from oblivion into Michael Lewis' best-seller Flash Boys, he became the accidental entrepreneur. As author Lewis told Brad, "You were never looking for a fight. The fight found you."

Let's Get Physiclo
Pitching his pectorals out, Frank Yao is an agile blend of Tony Robbins, David Barton and Michael Baryshnikov. Who couldn't identify with the case of the un-used gym memberships? We're cramming and slamming our complex lives into slivers of nano-seconds. Yao created Physiclo (http://www.physiclo.com), craving more athletic bang for his workout wear: "Let's get more done in less time." After extensive research on integrated resistance panels, fabrics and optimum activation of muscles, presto! Says the magnetic athletic, patents are pending ...

3D - Determination, Dirt & Dynasty
Take Brandon Steiner, the sports marketing maven. As a 10-year old from Brooklyn, living over a Glatt Kosher butcher, he convinced his 75-year old neighbor to let him deliver bagels, milk and newspapers to her door. 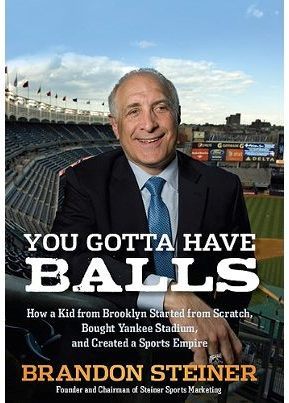 "Listening to my mother Evelyn" was the key: "Differentiate yourself. Give people what they need." The words of a Bensonhurst life coach - his Mom - led him on the road to a sports marketing empire. Clamoring, "Ya gotta have balls!" Steiner gives his fans what they need: Ball Park maps, signed baseballs packaged in classy cases with authenticated field dirt for passionate collectors.

I.B.M. - Innovation Breeds Mergers
Call it the "104-year old start-up." Luis Leon says IBM wants to give new kids a boost. The kahoonah of blue chip biz is out there seeking partners with good synergy. "It's in the DNA" - it's a land of hootsuite, hybrids, and eco-system hook-ups.

Grit & Bear it - No Twain, No Gain
Jon Gordon speaks from the Land of Positivity, encouraging us to find our purpose, to board that Energy Bus. After all, "The two most important days in your life are the day you are born and the day you find out why." Mark Twain 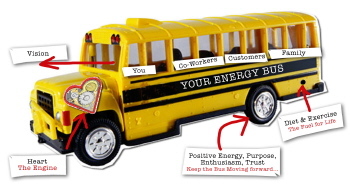 Growing up in an Italian/Jewish family, he was faced with a tad of skepticism. When he said "good morning" to his Dad, the response was, "What's so good about it?" Gordon persisted after 30 rejections on his Energy Bus book proposal. Fast forward 8 years on his perseverance journey ("no energy vampires allowed") when he landed on NBC in the Today Show green room next to Queen Latifah. 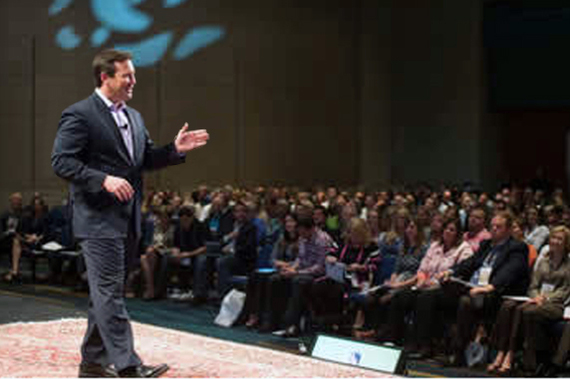 PILLOW TALK - Casper the Friendly Mattress
Philip Krim and Neil Parikh of Casper ( www.casper.com) are the real deal duo. Kind of like the Rodgers & Hammerstein of mattresses. Sleepless in robotics, Parikh already explored bacteria design and NASA . Why not beds? After all, they were both getting only 4 hours sleep, which the boys wanted to optimize. Their philosophy? One must "walk in the shoes (or should they say slippers) of your customers." Taking a leave from med school, (now COO) Parikh felt it was time for action. Guess it's like that old Chinese sleep-no-more proverb: "The best time to plant a tree was 20 years ago. The second best time is now."

Just May-O be We Can Change the World...To Vegan Sexy
Hampton Creek (http://www.hamptoncreek.com). Sounds sorta like a new hit Netflix series starring Rob Lowe. Instead it's the new "it" kid on the block company. Founded by change-the-planet Superboy Josh Tetrick. Just a good-ol' American heartland Birmingham sweet Alabama blend of Harry Connick Jr. and Ken Burns. A Cornell Arts & Sciences undergrad (Sociology & Government), Josh Tetrick is a soft spoken, southern gentleman kind of guy with pathos, a heart of vegan gold, and a hipster sense of humor. He's even got a Chief of Stuff. 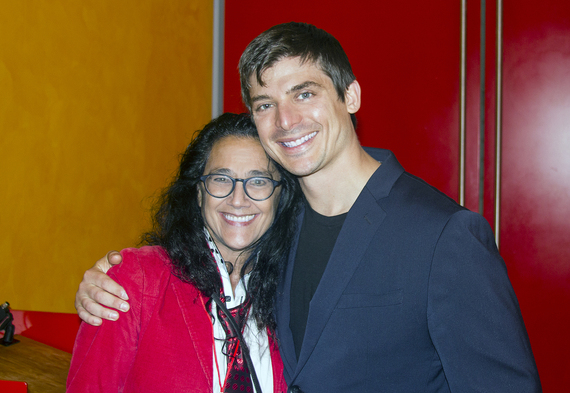 His idea? Just use food - mostly plants - to connect emotionally. Blend biochemistry with culinary -- take the eggs out of the mayo. Make it vegan sexy. Use sorghum, split peas, plants. "Good people will do good - just make it easy." 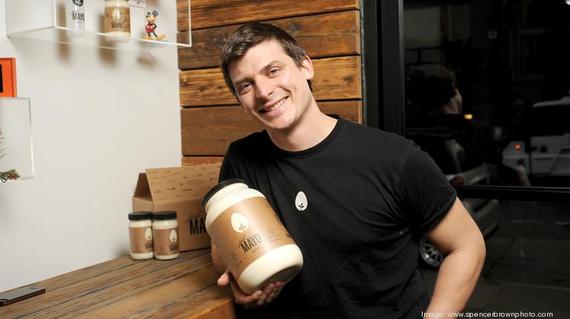 It was on a trip to Monrovia, Liberia that he had an AHA-ntrepreneur type moment: "What if we started over together?" Taking a biochemist's molecular point of view, he examined the molecular weight of protein. Kinda like Greek sculptors scooping out chunks of marble, Tetrick deletes time and politics. Kinda like the Summit's theme: Erasing the Edge.

Tetrick's goal? Turn bleak to chic. Make the healthiest, sexiest, most affordable food system. Tackling government committees, large conglomerates, Congressional hearings, millennials, and politicians. You can find Josh's probing letters in several editions of the Sunday New York Times addressed to great grandmothers, presidential candidates, and 23-year olds (http://www.hamptoncreek.com/new-york-times/dear-23-year-old), including his personal phone number and e-mail address. Challenging our reliance on eggs ....he's whipping up the food industry. As Yoda says: "Do it or not. There is no try." 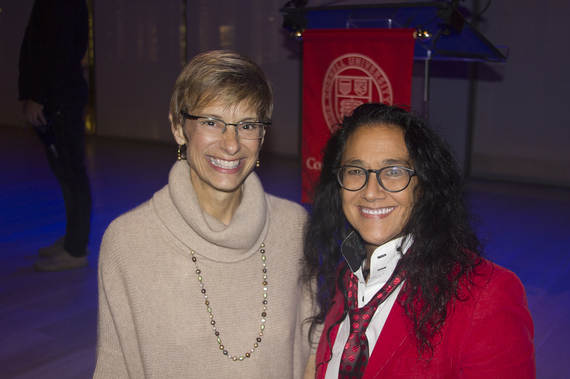 We get it. Cornell is a champion of climbing high. Yup. From magnates to mentors, Cornell's sure looking swell, stretching far above Cayuga's waters of entrepreneurial outreach.

Langer Lab of Perseverance
With 1100 patents, 1300 articles, 220 awards and three academy nods (Science, Medicine, & Engineering), Bob Langer is a dry-witted, understated genius, a persevering combo of Bill Nye and Bob Newhart, a truth-seeker and forge-ahead-er in the manner of Sagan and Einstein. He's the Woody Allen of invention. 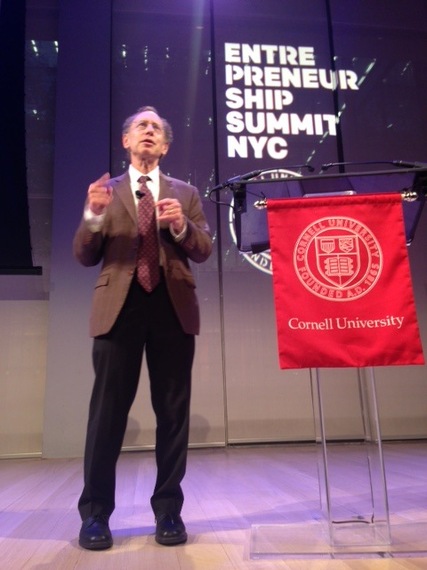 Flashing back to my Cornell undergraduate days, I hear my philosophy professor quote Confucius: "It does not matter how slowly you go as long as you do not stop."

A blend of wiz and biz, Langer is living proof not to give up. At MIT? He was developing substances to prevent blood vessels from growing. A chemical engineer dabbling in biology? He was simply in the right place at the wrong molecular time. His pursuit of polymers for treating brain cancer led to nine grant rejections. The Langer response? "Never give up!" He illustrates with his lab team's quest against frizz; their search for silky hair was on. Langer stood his ground, rejecting the popular silicone, introducing a poly-fluoroEster. Sounds like a chemical twist on the Purim Queen. Eureka! The Holy Grail of No-Frizz. Living Proof (http://www.livingproof.com) of no more bad hair days. What else could a girl want?

So, entre nous, I would normally opt for the rib-eye entre' cote. But what about starting over, with a sorghum soy-free steak alternative? I think I hear my inner entrepreneur whispering, "Stop postponing...go follow your own passion."

Guess it's like that old Chinese proverb. "The best time to plant a tree was 20 years ago. The second best time is now."