The New York Times recently wrote a story about students at Cornell University using social media to plan their evenings. The Gray Lady argued that the students do not merely go to the bar to socialize and "hook up" as students did of old. Instead they see if people are at the bar using Twitter, and drink before they go to the bar, spending far less time and money at actual establishments and affecting local bar business.

This is far more impersonal and the decline of western civilization also probably? We don't know. We use twitter a lot!

In their article, the Times, as is their wont, quoted several different Cornell students to back up their point.
However, IvyGate reported that the Cornell students identified in the article were not enrolled in Cornell. Subsequently, it was proved that six Cornell students gave fake names to a Times reporter and a Times photographer. And now the Times is really mad!

“Short of asking people for ID, you [assume] that when people give you a name, they represent themselves as who they are or say ‘I don’t want to be quoted,’” Times free-lancer Courtney Rubin told the Cornell Sun. “If I asked them for IDs, they probably would’ve given me fake IDs. … I assume they gave me the names on their fake IDs.”

The Times was subsequently forced to issue a correction, which we embedded below.

We understand the compulsion to protect your identity in the social media age (especially if you are holding a goldfish bowl full of vodka). But come on! Don't lie to the paper of record. Talk about the decline of western civilization! 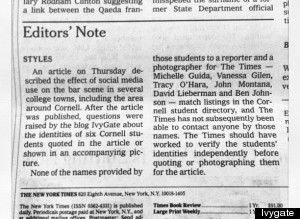