Hey, Corporate America, are you befuddled as to why you are widely considered the mustache-twirling villain in the tragicomedy that is the U.S. economy? Here are two pieces of news that might help explain.

First, your chief financial officers shipped $206 billion in cash to overseas tax shelters last year, Bloomberg reported on Wednesday. The total amount of cash held in offshore havens rose to $1.95 trillion, according to Bloomberg, which is more than the combined market values of the six biggest companies in the U.S.

(Fun fact: Some of those six companies are also major hoarders of offshore cash -- Apple, Exxon, Google and GE alone have $250 billion parked offshore, according to Bloomberg.)

To add insult to injury, or maybe injury to injury, corporate CFOs are also staunchly opposed to raising the minimum wage, according to a new survey by Duke University and CFO Magazine. 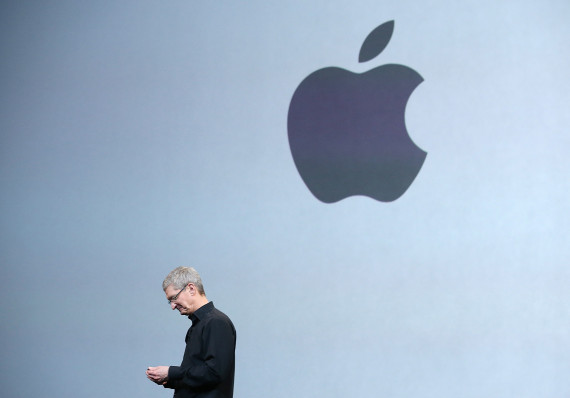 Tim Cook, CEO of Apple, which has one of Corporate America's largest stockpiles of overseas cash.

About 39 percent of the 216 U.S. CFOs surveyed said they would cut jobs if the minimum wage were higher, including nearly 57 percent of CFOs in the retail industry and 40 percent of manufacturing CFOs. These companies are worried that having to pay their lowest-paid workers slightly more will crush their profits.

Meanwhile, corporate profits are at record highs, and worker wages have not budged for decades, when adjusted for inflation.

The CFO survey is not scientific, given its small sample size. And it is encouraging that 61 percent of CFOs said they wouldn't cut jobs if the minimum wage were higher. In fact, many studies have suggested that a higher minimum wage would result in little or no job loss.

One exception is a recent study by the Congressional Budget Office, which estimated that raising the federal minimum wage to $10.10 an hour from $7.25 an hour would kill 500,000 jobs.

But a higher minimum wage would also lift 900,000 people out of poverty, according to that CBO study, and give consumers $28 billion per year to spend, boosting the broader economy, according to a separate Chicago Federal Reserve study.

A higher minimum wage could save the U.S. government $4.6 billion in food-stamp costs every year, according to a study by the Center For America Progress.

Meanwhile, those corporate cash-hoarders -- America's true welfare queens -- are costing the U.S. government between $30 billion and $90 billion in revenue every year, according to a 2013 study by the Congressional Research Service.

In other words, Corporate America, you are costing us money in two ways, by paying workers too little and by shielding cash from Uncle Sam. Now do you see why everybody is mad at you?