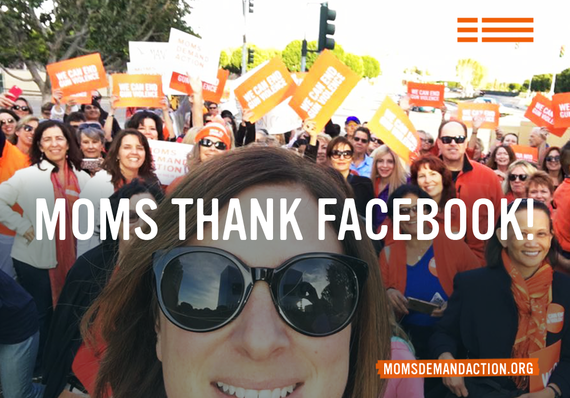 Proving the maxim that change is a marathon, not a sprint, after a two-year campaign by American moms to get Facebook to change its gun policies, the tech giant finally responded by prohibiting all unlicensed gun sales on their social media platforms.

In 2014, Moms Demand Action for Gun Sense in America, part of Everytown for Gun Safety, set out to convince Facebook to stop dangerous gun sales on the platform and make social media safer for families. In barely a month, our campaign drew more than 230,000 supporters who were concerned that anyone, with the click of a mouse, could find someone willing to sell a gun with no background check and no questions asked.

As part of that campaign, Moms released a "closer look" video--a play on Facebook's 10th anniversary "look back" videos--to illustrate how the company's gun policy made it easy for dangerous people and kids to use Facebook to buy and sell guns without criminal background checks. The campaign resulted in nine new policies aimed at curbing children's access to the online gun market and reduced the number of Facebook gun sales without a background check.

Our relationship with Facebook did not end there--we knew there was so much more Facebook could do to help keep guns out of the hands of dangerous people.

Moms are on Facebook every day. In fact, 27 million U.S. women identify as mothers on Facebook. It was important to us that the company stand with us in the fight against gun violence. Over the course of the last two years, Moms and Everytown kept the conversation with Facebook going, and we continued our research that showed how dangerous people were using their platforms to get guns.

Our investigations on the vast online market for guns proved how easy it is for criminals to buy guns online without a background check and showed how Facebook prohibiting unlicensed gun transactions would save lives. One example was about Sharon Kay Berkshire, who in 2014 was shot and killed along with three others after her ex-boyfriend - who had a lengthy history of violent crime that precluded him from possessing guns - went on Facebook and bought a gun from an unlicensed seller, no questions asked.

Thanks to Facebook's new policy, this kind of transaction can't happen anymore on their social media platforms.

So while Facebook took important steps in the right direction in 2014, the tech giant took a giant leap forward on Friday by blocking all unlicensed gun sales on its platforms, including Instagram.

And - make no mistake - this change in policy will protect American lives.

Why? Because unlike gun sales conducted by federally licensed dealers online, unlicensed sellers are not required by law to run a criminal background check when they sell or trade a gun. This loophole provides a quick and easy avenue for criminals and other dangerous people to get guns.

Millions of online gun sales are arranged this way--not just on Facebook--but on a number of other online sites like Armslist.com, the self-described Craigslist for guns. Facebook's bold move will help narrow this prolific market that allows dangerous people to get their hands on guns.

This is how we prevent gun violence. This is how we change a dangerous gun culture that contributes to the deaths of 88 Americans and injures hundreds more every single day.

And the world's most popular social media platform isn't just influential with everyday Americans - our country's leaders and lawmakers listen to corporate America, too. The fight for marriage equality began long ago, but thanks to the hard work of that movement's tireless advocates who never gave up on pushing for social change, household brands like Coca Cola and Apple eventually stood with them, proving to legislators in state houses and powerful voices in Washington that the issue was no longer a political third rail. A once taboo issue emerged as one that major corporations embraced.

That's real culture change. And that's exactly what is happening on the issue of gun violence prevention. As long as Congress refuses to protect their constituents, it's up to companies like Facebook to protect their customers.

Facebook's announcement is a major indicator of the temperature and direction of corporate America and a nation that is demanding a more responsible gun culture.

It will take all of us - all Americans who believe there are common-sense ways to address our nation's gun violence crisis - to push for and drive real change on this issue. We can end gun violence. Join us in making it happen, and thank Facebook for doing their part.