WASHINGTON -- Money traditionally follows power in the nation's capital. As a result, corporate campaign contributions have historically been split among incumbents of both political parties, with a decided advantage for whichever controls Congress and the White House.

But that pattern has begun to fray, as companies in some major industries that see a threat from federal regulations -- most notably the energy sector -- appear to have deepened bonds with the Republican Party, with which they share increasingly indistinguishable goals.

"Since they're trying to block regulation or block new laws, a single party can do the job for them," said Robert Weissman, president of the consumer group Public Citizen. "So it makes sense to deepen the relationship there."

One of the most telling examples of this deepened relationship is the oil and gas sector. Just over two decades ago, Republican donations from people and companies associated with oil and gas outpaced Democratic donations -- but by less than a 2-to-1 margin, according to the Center for Responsive Politics. After the Republican takeover of Congress in 1994, that ratio increased to 3 to 1 or 4 to 1.

So far in the 2012 election cycle, that ratio has shot up to over 7 to 1, according to CRP data, tallying nearly $17 million in donations from oil and gas interests to Republicans, compared to just over $2 million to Democrats. 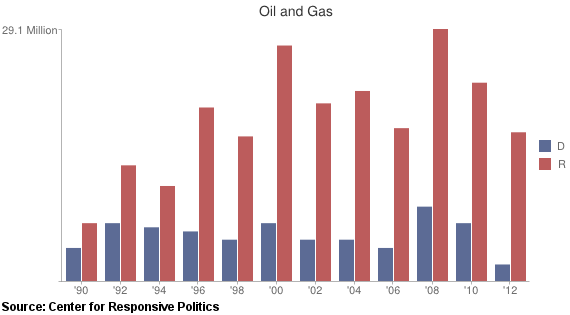 The trend is similar, if not quite as extreme, across the energy sector. In the mining industry, what was a 60-40 split in proportion of Republican giving to Democrat giving in the '90s is an 87-13 split in 2012. 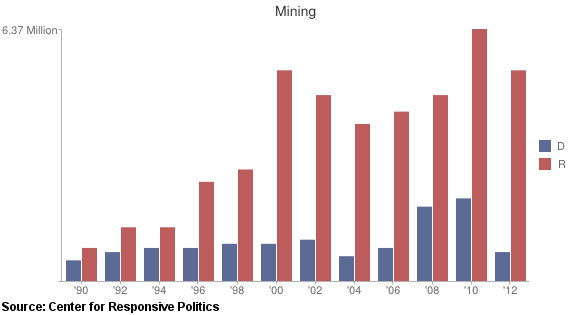 Spokesmen for the American Petroleum Institute, a lobbying colossus for the oil and gas industry, and ExxonMobil, the single largest political player in the sector, declined to comment on the dramatic increase in donations to the GOP relative to the Democrats.

Lloyd Avram, a spokesman for Chevron, also declined to comment on the discrepancy in donations linked to his company.

"Chevron exercises its fundamental right and responsibility to participate in the political process," Avram wrote in an email to The Huffington Post. "We make political contributions where permitted by law and, consistent with Company policy, to support political candidates, political organizations and ballot measures committed to economic development, free enterprise and good government."

Avram pointed out that Chevron is not directly responsible for the larger set of donations tallied by opensecrets.org that showed a 7-to-1 Republican-to-Democrat ratio in Chevron-related campaign donations in the 2012 cycle. Those figures include donations by Chevron's employee PAC and by individuals associated with the company -- neither of which the company directly controls.

Over the long term, there's been a notable shift across many big-business sectors. Contribution filing records show industries that had either leaned Democratic or split their contributions fairly evenly started giving much more to Republicans after the 1994 elections, when the GOP seized control of Congress for the first time in 40 years.

"A lot of the entrenched interests give to who's in power," said Bill Allison, editorial director of the Sunlight Foundation, which tracks campaign spending. "If you wanted to get something done in Washington [from 1995 until 2007], you really had to go to Republicans," Allison said.

And filings show that in many sectors, including telecom, agribusiness, real estate, and insurance, that has largely remained the case since then, despite the political gains and losses by Democrats in the interim. 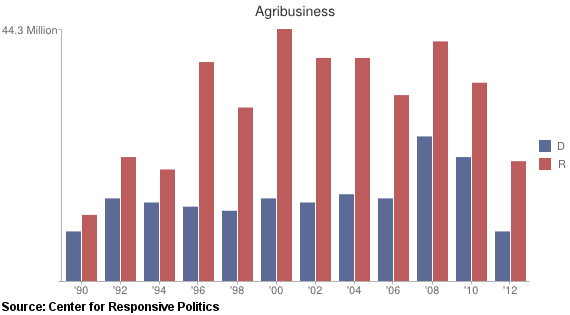 That may be due to the concerted effort by Republican leaders to turn the lobbyist and corporate community into an ideologically dependable source of political support and campaign contributions after the GOP came to power in the '90s -- what the famous "K Street Project" was all about.

But many industries had also been in the habit of giving to both parties for pragmatic reasons. The extraordinary profusion of earmarks meant money flowed to incumbent Democrats and Republicans alike, as long as they delivered.

With fewer earmarks these days, that equation has changed.

And then there's the matter of congressional gridlock. "One of the things that's going on is that right now nobody's in power," said Allison, of the Sunlight Foundation.

"Very little is getting done in Washington. Just about every bill is a nonstarter," he said. So, with action stalled, major industries are "giving more toward people they think can help them in the future than can help them right now."

Observers note that the financial bond between the GOP and the energy and financial sectors has intensified as the Republican agenda has gotten more radically anti-government -- although as with all things related to campaign finance, it's hard to say which came first. The Republican Party's historical aversion to tax increases has also morphed into a constant demand for lower rates and a zero tolerance for any kind of hike, even as a small part of long-term deficit reduction.

An often-cited example of how loyal modern Republican elected officials are to the oil industry has been a consistent, nearly unanimous refusal to reduce the massive federal tax subsidies for an industry currently making windfall profits.

One sector that has only recently -- but decidedly -- turned its donations toward Republicans is the financial services industry. Overall, the giant finance, insurance and real estate sector used to divvy up its money pretty evenly. The split in the 2012 cycle so far has been 68-32, Republican-leaning. People associated with hedge funds in particular, who from 2000 to 2008 leaned overwhelmingly Democratic, are favoring Republicans, $4.1 million to $1.9 million. 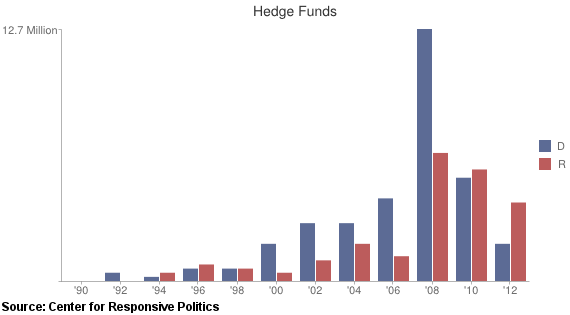 Wall Street's motivation appears to be more personal than ideological, however, both an aversion to President Obama and a fondness for colleague Mitt Romney. As Public Citizen's Weissman said, "I still remain flabbergasted by their genuine horror at Obama given that they've been coddled, but it's there."