Verizon is now in over 150 countries and has over 330 'investments' worldwide. AT&T is now touting its investments in Mexico and the 100+ locations in the Middle East and Africa. And both companies claim that they are digital entertainment companies. Verizon bought AOL (which owns HuffPost), while AT&T now has multiple regional sports networks and both are doing mobile advertising and ways to track you online or while you're driving in your 'Internet of Things' (IoT) connected car... (for an additional fee).

And unfortunately, instead of bringing America a fabulous fiber optic future that we all paid for, it appears we have instead paid for most, if not all of these other investments. Greed won and America lost... big time.

Greed 101 vs Infrastructure: We Lost.

Unfortunately, Verizon, AT&T and CenturyLink control and have a monopoly over the state-based utility wires. State by state they had an obligation to not only maintain but to upgrade the states' critical infrastructure. They failed. And while it varies by state, the companies were given massive financial incentives to do this over the last two decades+ and they mostly pocketed billions per state and spent it somewhere else. And in some cases, they just sold off the territory or state holdings because it was either not profitable enough for them or it was more 'rural', or didn't fit into their strategic plans.

They also have a monopoly on the wires to the cell towers and Wifi hot spots, known as 'special access', (and recently renamed 'broadband data services'). Wireless is really a wired service with a long, invisible extension cord. And the overly hyped, non-existent '5G' is really going to be a 'fiber-to-the-antenna' project--i.e., lots of antennas connected with a fiber optic wire--if it ever shows up.

And the Unions are the canary in the coal mine; they are an indicator that instead of caring about the networks and their local customers and obligations, the incumbent phone companies took the money and used the state utility networks as a cash machine for everything else.

Verizon wants to kill the canary--they are just a line item on a financial spreadsheet to be eliminated.

It is a good thing that they, the unions, are singing at this time and they need to be heard.

We Paid for a Ferrari on the Infobahn and Got a Skateboard on a Dirt Road.

I wrote "The Book of Broken Promises" , (now a cheap PDF for summer reading), to give an encyclopedic blow by blow, phone company by phone company account of what was promised and what happened. By 2010, America should have been the first fully fiber optic-based nation. The companies that are now AT&T, Verizon and CenturyLink, should have replaced the aging copper wires of the state utility (some 40-70+ years old), with a fiber optic wire that is part of the state utility.

Instead, everyone reading this who had a wired service over the last two decades paid over $4000-5000.00 per household extra. America paid about $420 billion by the end of 2015, and counting, and based on our recent uncovering of massive cross-subsidies of Verizon's other services (which happened in every AT&T and CenturyLink state, it would appear)--that's the low number.

U-Verse, for example, uses the existing copper wires-to-the-home--in 21 states; a bait-and-switch. Verizon's FiOS, which is fiber, only went to about ½ their state utility holdings and then stopped, abandoning whole territories of America's East Coast. And the current plan is to 'shut off the copper' and force-march customers onto wireless--their wireless, but keep the secret special access wires, secret. And the kicker--the deployment of fiber was supposed to start in the 1990's, two decades ago, and be completed around 2010. U-Verse and FiOS didn't show up until at least 2005-2006.

Instead, we all paid for these investments overseas, these entertainment purchases-- the executive pay--and everything else but delivering on their commitments to the cities and citizens of America.

While hard to track down, Verizon is in 150 countries and has over 330 investments we found. These are some of my personal favorites--Uruguay, Amsterdam, Malaysia, the Philippines and Bulgaria. But, I particularly like the "NCC Charlie, Delta, Echo" series-- straight out of some spy movie--who knows what investments these hide.

AT&T, on the other hand, set up regions around the world to provide services.

There is AT&T in "EMEA" -- "AT&T Europe, the Middle East and Africa", which has teams based in somewhere around 29 to 107 countries. And there is also an "AT&T Asia Pacific" and "AT&T Caribbean & South America". Meet EMEA. 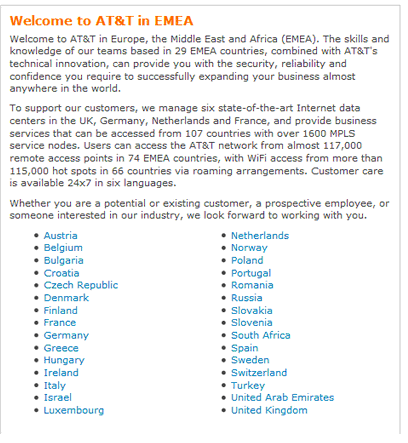 And AT&T cares about America(s) with an added "s" as this is part of AT&T's "scope": which is to invest in Mexico and Latin America. And instead of infrastructure, AT&T now is a digital entertainment company worldwide and even owns regional sports networks and 'game related programming'

"We are a leading provider of communications and digital entertainment services in the United States and the world. We offer our services and products to consumers in the U.S., Mexico and Latin America and to businesses and other providers of telecommunications services worldwide. We also own and operate three regional sports networks, and retain non-controlling interests in another regional sports network and a network dedicated to game-related programming as well as Internet interactive game playing.

"We believe that the wireless model in the U.S., with exploding demand for mobile Internet service and the associated economic benefits, will be repeated around the world as companies invest in high-speed mobile networks. Due in part to recent changes in the legal and regulatory framework in Mexico, during 2015 we invested in Mexican wireless operations to establish a unique, seamless, cross-border North American wireless network covering 355 million people and businesses in the U.S. and Mexico. During 2016, we will continue to build a world-class mobile business and network in Mexico."

And what's hot for AT&T: Mobile advertising and tracking and targeting you.

"We conducted the trials in collaboration with Opera Mediaworks, one of the world's largest mobile advertising and marketing platforms, so advertisers could reach their target audiences across TV and mobile devices. Advertisers were able to measure results on a variety of key performance indicators from brand/message favorability to sales."

And Verizon? Verizon is a cross-platform entertainment company... First buying AOL (which also owns HuffPost), and going after Yahoo.

And let's not forget to connect your car with Verizon's Hum.

And the reality? Why the hell did the state utility commissions and the FCC allow these companies to go into every other business in ever other country and not take care of their primary customer and critical infrastructure?

As I wrote, based on different international groups that track broadband:

"America's Broadband Embarrassment: We Are 19th to 55th in the World in Wired & Wireless Broadband Speed Rankings"

And compared to other countries we are overpaying across-the-board. In my unscientific study of some Asian broadband offerings compared to Time Warner Cable:

Meanwhile, OCED claims that America is 30th in "fixed broadband prices per megabit per second of advertised speed", in 2014.

In September 2015, CWA union sent letters to have investigations of the infrastructure in multiple states.

"The letters, filed by the Communications Workers of America (CWA) with public utility commissions in Delaware, Maryland, New York, Pennsylvania, Virginia and the District of Columbia, claimed that just 0.39 percent of the $50.7 billion that Verizon has spent on its landline network from 2008 through 2014 has been allocated to its copper infrastructure."

And according to the Albany Times Union, cities along the East Coast have noticed they weren't upgraded, even where there are commitments.

"On Oct. 1, mayors from 14 East Coast cities, including Albany Mayor Kathy Sheehan, wrote to Verizon CEO Lowell McAdam complaining the company has failed to meet legal obligations to build out FiOS as required under government agreements.

"'In some cases, such as New York City, Pittsburgh, Jersey City and Newark, Verizon has failed to meet contractual or legislative deadlines to make fiber optic cable service available to many of our residents,' the letter states."

We should never have let the companies take the money from the state utilities, that did not go to build out the networks, to fund being an international entertainment conglomerate--that was funded via rate increases that were supposed to go to fund a fiber optic future we never got.

It is good that the unions, the canaries are singing. It's time that there song is heard loud and clear. They are warning us of worse things to happen if we do nothing now.