While finance executives urge Congress and the President to rein in spending, finance companies are raking in profits.

Corporate profits reached a record high in the third quarter, according to a Commerce Department report out Thursday. And the financial sector is doing particularly well. Financial companies accounted for all of the net growth in domestic corporate profits during the third quarter, according to analysis by Haver Analytics cited by The New York Times. Catherine Rampell writes:

Meanwhile, workers are struggling. Average hourly pay, when adjusted for inflation, has fallen 0.7 percent over the past year, according to the Labor Department. And the unemployment rate in October was 7.9 percent -- it was at a low of 4.4 percent in May 2007 before the recession.

It's a "zero-sum game," Moody's Analytics economist Aaron Smith told The Huffington Post in February. Companies are earning record profits largely because they are squeezing more productivity out of their workers without paying them more. Workers are afraid to slack off because it's become so hard to find another job.

Investors, on the other hand, are reaping money. Indeed, this month many companies issued special year-end dividends ahead of expected tax hikes in 2013. If you had a few million dollars lying around in early 2009, you could have made a fortune by investing in the stock market. The S&P 500 has more than doubled since its lowest point of the recession, in March 2009.

Check out how much corporate profits have boomed since 2009: 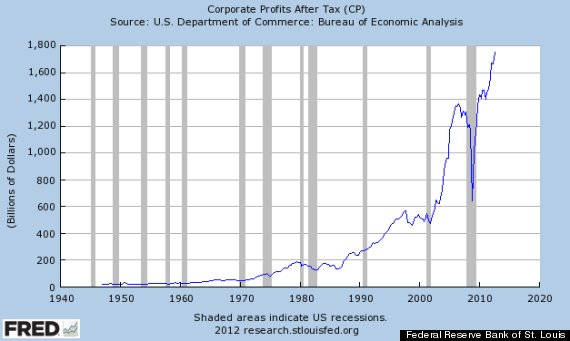