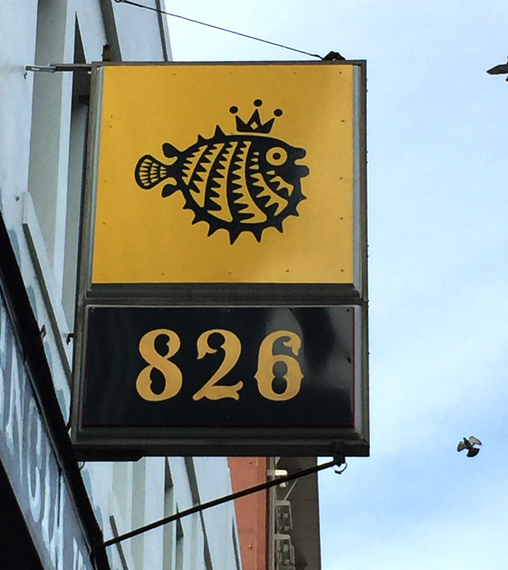 Those of us in the Bay Area who are concerned about the effects of gentrification on San Francisco communities often turn to a Facebook page titled "VanishingSF," a collection of stories, events, and not-so-random facts started in 2013 by a thirty year resident of the city, Julie Rae Levak. She began her first post with a quote from Hope in the Dark, a book by revered local writer, Rebecca Solnit: "To live entirely for oneself in private is a huge luxury, a luxury countless aspects of this society encourage, but like a diet of pure fois gras, it clogs and narrows the arteries of the heart." Much of the ire of the blog is aimed at the tech industry and its workers, the biggest influence and easiest target in the class war erupting all over the city.

I am a regular reader of "VanishingSF" and welcome the perspective and reporting it offers in support of those most impacted by the wealth disparity in the city, particularly its Mission neighborhood where I volunteer weekly at 826 Valencia, a writing center begun in that neighborhood in 2002 precisely because it was located where underserved students could benefit from our help. But as Google buses started taking over Mission streets and yet another independent bookstore turned into a high-end home furnishing mart, I found myself easily sneering at the tech workers and wondered if it wasn't silicon, rather than fois gras, that was clogging their hearts.

Then 826 Valenica, ever conscious of its goal to close the academic achievement gap for under-served youth in the Bay Area by providing the tools and resources necessary for success in school and beyond, planned to open an additional center in the Tenderloin, a struggling neighborhood not far from City Hall where some 3,000 underserved school-age children now live. As I participated in supporting the new center, I was chagrined to find out that much of the support for the project came from the tech community I had comfortably come to criticize. The support was not just monetary donations but also time, talent, and energy, with folks taking the best practices that made their start-ups successful and applying them to the planning, building, and marketing of the new center.

While support for the new center came from many places--including loyal volunteers and staff and partner organizations--826 Valenica's staff described for me the role played by young adults who work at Pinterest, Dropbox, Goodreads, Spotify, Google and other tech companies I had come to demonize. They offered another perspective on some of the people who work there and how they have caught the community spirit generated by 826 Valenica's good will. From the most recent annual data collected by the organization, corporate volunteer events are up by over 60% and include the participation of 19 corporations whose 151 employees have served over 454 hours. In addition to this people power, substantial grants have come from Google, Twitter, Dolby, and other corporations. Included among the volunteers are former 826ers, workers who as maturing students benefited from the programs offered by the writing center and now want to give back.

Also among the corporate volunteers is a student from the Masters in Public Administration program at the University of San Francisco that I teach in. I joined her and many supporters at the opening of the new 826 Valencia center in the Tenderloin. Although I was there as a volunteer supporter, my student and several others were there in their roles promoting community relations as part of their companies' enactment of corporate social responsibility (CSR)-- a business practice that involves participating in initiatives that create shared value for business and society. The University of San Francisco recently hosted a Social Entrepreneurship and Innovation Conference that brought together more than 200 tech leaders, community members, and business students to discuss how technology can improve everything from health care to education. CSR is a rapidly growing field for professionals who are looking for impactful careers in sustainability, focusing on the balance between financial, social, and environmental benefits for both nonprofit and profit-seeking firms. Working adult students, professionals who recognize on a daily basis how companies and their employees can collaborate to redress social inequities, organized the event at USF.

Promoting and providing employees with meaningful volunteer opportunities helps companies to attract top talent and further to engage, develop, and retain workers who demonstrate heightened productivity and skill development. While CSR boosts their public image externally, it also helps to develop pride in the company and build relationships among its employees. As a consequence CSR improves the bottom line for everyone involved. According to a 2012 study by PricewaterhouseCoopers, 88% of recent college graduates gravitated toward companies that prioritized CSR programs. CSR Central, an organization dedicated to showcasing the best in CSR in Ireland, is currently studying the benefits of employee volunteer initiatives. Their preliminary conclusions can be found here: CSR. Among their findings is that it is not just the companies and the non-profits that gain in tangible ways. Individuals report greater life satisfaction and better physical and mental health.

Whether employees participates in an organized CSR events hosted by 826 Valenica at their original location in the Mission, in schools, and now in the Tenderloin, or simply take their own initiative to become involved in the development of young people's writing skills, everyone benefits. The reward of volunteering reaffirms the wisdom of Archbishop Desmond Tutu who recognized that: "A person is a person through other persons. None of us comes into the world fully formed. We would not know how to think, or walk, or speak, or behave as human beings unless we learned it from other human beings. We need other human beings in order to be human. I am because other people are." That is the moral of the story told by the students, staff, and the volunteers--CSR folk and regulars like me--at 826 Valenica.

You can support 826 Valenica's current Indiegogo campaign and learn more about their new, second center in San Francisco, in the heart of the Tenderloin, by following this link: https://www.gifttool.com/donations/Donate?ID=1767&AID=3372