It's one of the age-old Washington mind-benders: How is it possible that more than two dozen major U.S. companies post enormous profits and pay no taxes?

A report released Wednesday offers one possible explanation: In addition to spending nearly $500 million lobbying in a recent three-year period, those companies spread $41 million to the political campaigns of their friends in Congress.

And while most in Congress got a taste, the lion's share of campaign contributions went to a small group of congressional leaders in positions to stop any proposal to close a corporate tax loophole.

The report, "Loopholes for Sale," is from the U.S. PIRG consumer group and Citizens for Tax Justice, both favoring increased corporate taxation.

In January, the two organizations identified 30 corporations whose cumulative profit was $164 billion from 2008 to 2011. These corporations didn't just avoid paying taxes -- they actually collected $10.6 billion in tax rebates, according to the groups. They were dubbed the "Dirty Thirty."

According to the groups' calculations, those 30 companies collected $68 billion from 2008 to 2010, thanks to all their tax loopholes, compared with the nominal corporate tax rate of 35 percent. That's about $481 per U.S. taxpayer.

The companies spent a total of $467 million lobbying Congress during that period.

Now, studying the patterns of campaign donations, the new report finds that 98 percent of the current members of Congress received Dirty Thirty money from the 2006 election cycle to the present.

But the really big bucks went to people in a position to block things. The top five recipients of contributions from the Dirty Thirty since the 2006 election cycle were:

Exclusively for The Huffington Post, the report's authors calculated the party split in Dirty Thirty largesse. Republicans received nearly $17 million since the 2006 election cycle, or 56 percent of Dirty Thirty money, compared with more than $13 million for Democrats.

Here, from the previous report, are the companies the interest groups call the Dirty Thirty: 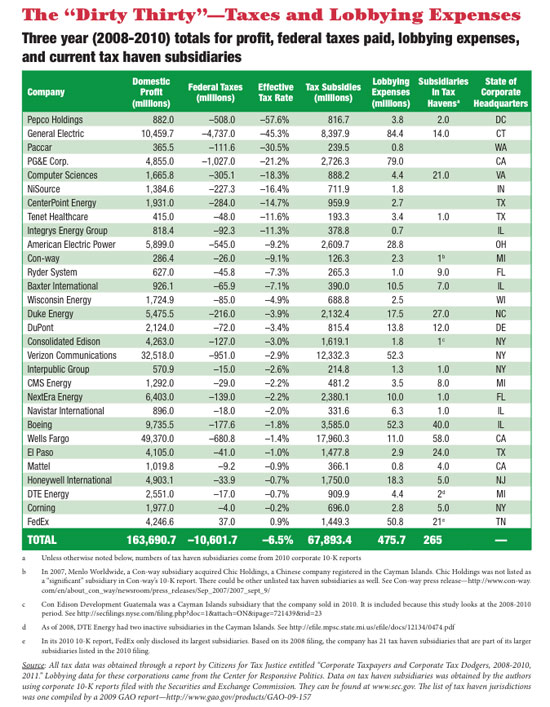 CORRECTIONS: An earlier version of this article misstated the time period in which 98 percent of the current members of Congress received Dirty Thirty money. The money was donated from the 2006 cycle to the present, not just from 2008 to 2010.

The article also said incorrectly that Republicans received some $17 billion and Democrats some $13 billion since the 2006 election cycle from the Dirty Thirty. The correct numbers are $17 million and $13 million.