In recent weeks, Congressional support has been forming around the idea of another "repatriation tax holiday," reports the Wall Street Journal. The would mean corporations doing business overseas would be permitted to pay only 5.25 percent tax on earnings brought back to the United States for a temporary time period, as opposed to 35 percent corporate tax rate on domestic profits.

Proponents of the proposal claim a tax holiday will bring much needed capital back to the U.S. economy for investment. But not everyone agrees.

Following the conclusion of the last tax holiday, in 2004, corporations actually increased the rate at which they moved investments out of the U.S, according to a study by the Center of Budget and Policy Priorities. The decision to move overseas, the study claims, was at least partly in anticipation of there being another tax holiday. 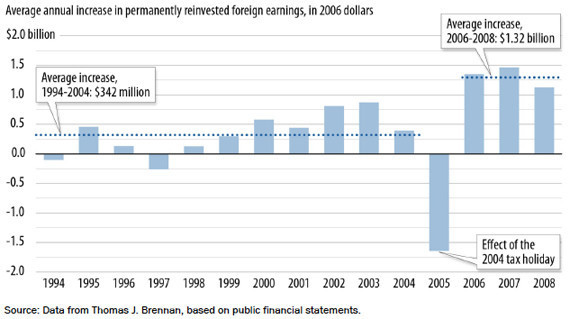 Rather than using their extra earnings to invest in American jobs, corporations laid off thousands of workers and passed the savings onto their shareholders, states the report. Pfizer, which according to the WSJ is one of the main corporate supporters of the newly proposed tax holiday, repatriated $37 billion in 2004, the report states. Despite the repatriation windfall -- the largest of any firm in 2004 -- Pfizer cut 10,000 U.S. jobs in 2005.

The study also takes aim at the claim that a tax holiday would help give firms extra and needed cash to create jobs in the U.S.

"According to the Federal Reserve," the report states, "U.S. non-financial corporations now have $1.9 trillion in liquid assets, the highest level as a share of total corporate assets since 1959." In other words, the report is saying there is enough money to invest as is.

Potential Congressional supporters want the new legislation to require companies would spend the money the way policy-makers intend them to, rather than legislating on faith.

Republican Senators like Orin Hatch (R-UT) wants to make sure companies don't take advantage of the government, reports WSJ. "I'm not against bringing it back this time, but we're going to have to get something back for it." And Senator Charles Schumer (D-NY) who sits on the Senate Finance Committee, stated that he would want to use the new revenue to fund an infrastructure bank, a policy goal of several liberals in Congress, reports Bloomberg.

But how much revenue the government would really take in is up for serious debate.

According to the non-partisan Joint Committee on Taxation, a tax holiday would significantly increase the deficit, reports the WSJ. A tax-holiday would cost the U.S. $78.7 billion in lost revenue over the decade following its implementation, the committee found.

See how a tax-holiday would affect the deficit here: 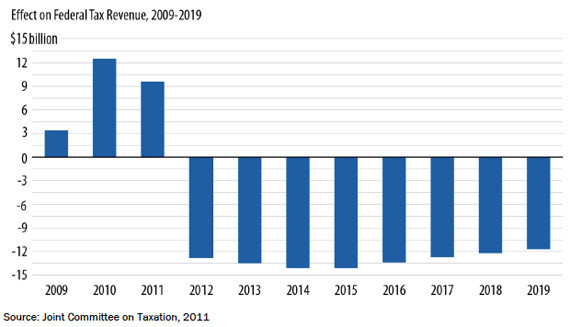