Even as the federal deficit has ballooned, U.S. corporations are paying lower tax bills than ever before, according to one measure.

That's the takeaway from a new report by the Center on Budget and Policy Priorities dissecting the tax structures of corporations, which CBPP Director Chuck Marr says are now paying taxes at "historical lows as a share of the [total] economy."

Marr points to a basic discrepancy: While the U.S.'s top corporate tax rate of 35 percent is one of the highest in the world, the amount corporations actually end up forking over to the government is much lower, sometime as low as 4 percent. This is due to a dizzying number of deductions, write-offs, and other accounting tricks that allow corporations to legally reduce their tax burden.

In 2007, the report notes, the Treasury estimated federal government had missed an opportunity to collect $1.2 trillion due to various corporate tax expenditures over the previous decade.

Using statistics from the Office of Management and Budget, CBPP created this graph, mapping total collected corporate taxes as a percentage of the overall U.S. economy: 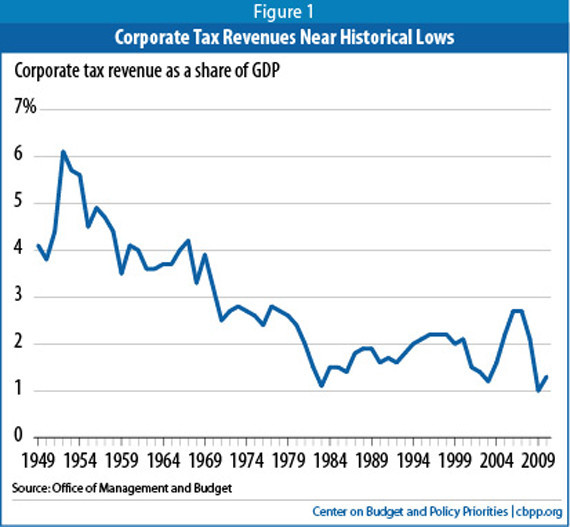 The report also notes that the current tax code is "industry-specific," meaning that some industries benefit more than others. Backing up that claim is the Congressional Budget Office, which estimates the effective marginal corporate-level tax rate to range from "29 percent on computer equipment to a negative 2.2 percent on petroleum and natural-gas structures."

The financial services industry is said to be taxed at 16.5%. The below graph shows how tax rates fluctuate widely by sector: 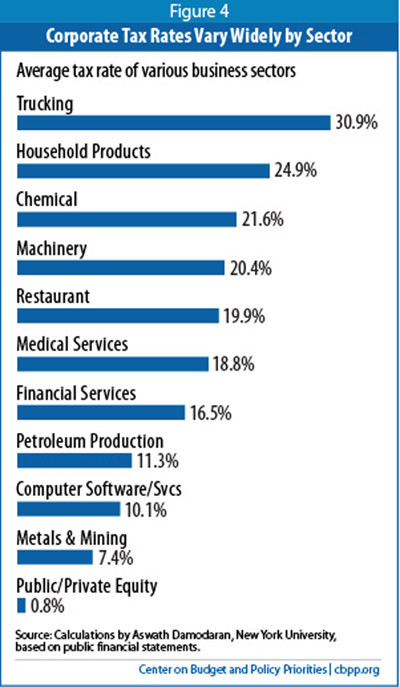 Finally, the report takes aim at the rapidly growing number of large businesses that are using their status as "S corporations, partnerships, limited liability companies, and sole proprietorships" to save on taxes. Here's CBPP's chart on this trend: 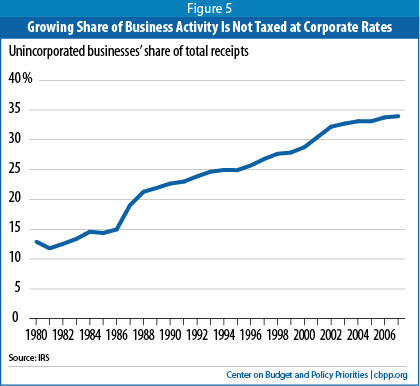 You can read the entire report here.