Many American companies are paying federal income taxes at far below the 35 percent rate often cited as the highest in the world. And many of the most profitable companies are effectively paying no taxes at all, according to a new report by the left-leaning Citizens for Tax Justice (CTJ), which advocates for tax fairness.

The think tank analyzed the 2008-2012 federal income tax filings of 288 Fortune 500 companies, focusing on companies that were "consistently profitable." CTJ found that 111 of the companies spent at least one year of the five paying zero or less in effective federal taxes. Twenty-six companies effectively paid "less than zero" taxes over that entire time because of massive tax breaks, according to the report. 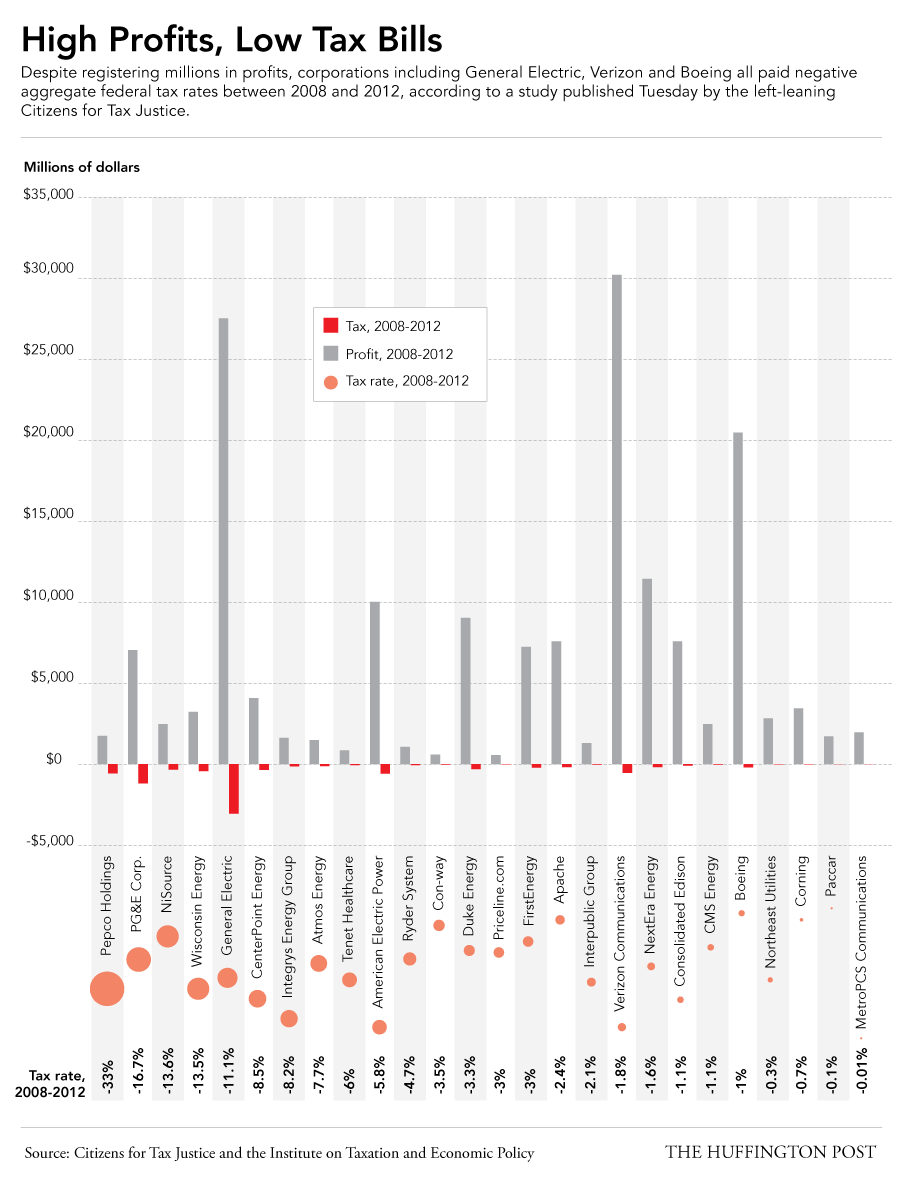 The Huffington Post contacted all 26 of the above corporations. Verizon, in particular, took issue with the report. "[T]o claim that Verizon paid no corporate federal taxes between 2008 to 2012 simply isn't true," Verizon spokesperson Ray McConville wrote in an email. "[T]he facts show that Verizon is one of the largest taxpayers and investors in America."

"The report from Citizens for Tax Justice is unfair and misleading," a spokesperson for American Electric Power wrote in an email. CenterPoint Energy pointed to public filings that show an effective income tax rates from between 32 percent and 45 percent over the five year period.

The rest listed a number of issues with CTJ's analysis that nearly all fell into a few main categories.

(1) We are simply adhering to the rules. Multiple companies -- including Boeing and Pepco Holdings, an energy delivery company -- maintained that they pay what is required by law.

(2) It's not fair to just look at federal taxes. Companies including General Electric, Con Edison, Verizon, FirstEnergy and Pepco Holdings pointed out that state, local, energy and environmental taxes were not incorporated into CTJ's analysis.

In a phone interview with HuffPost, CTJ counsel Rebecca Wilkins described this argument as a "coordinated response" by companies hoping to draw attention away from their federal tax bills. “These are some hugely profitable corporations paying less than you pay in federal income taxes," she said.

(3) We're investing in America. Companies ranging from American Electric Power and Pepco Holdings to PG&E, NiSource and Con Edison cited recent changes in the tax system as a reason for low taxes. Most specifically, they pointed to accelerated depreciation measures supported by both the Bush and Obama administrations during the Great Recession.

The basic idea behind the measure was to stimulate the floundering U.S. economy by incentivizing companies to finance infrastructure improvements (and theoretically foster job creation) now, and pay the taxes later.

"PG&E did just what Congress intended," company spokesperson Paul Moreno said in an interview with HuffPost.

(4) We'll pay our taxes later. Nearly every company that commented on the report cited the deferral of federal taxes for the low rates, arguing that they will theoretically pay taxes for the years 2008-2012 at a later date. CTJ's Wilkins expressed skepticism in an email, saying that for many companies such the deferred tax expense often "never becomes due" and instead "just continues to grow, year after year."

"Just about the time the taxes might come due, Congress gives them another tax break," she added.

This post has been updated to include NiSource's position on the report.