A rare — and stinky — corpse flower is blooming now at Cornell University, and those who are curious can watch, though sadly (or maybe happily) not smell, the spectacle on a live Web stream.

The Cornell corpse flower began blooming on Sunday (March 18) after weeks of watching.

Native to the equatorial rain forests of central Sumatra in western Indonesia, the corpse flower is technically known as an Indonesian titan arum (Amorphophallus titanum).

They grow only in the rain forests of Sumatra and rarely bloom in cultivation. The Cornell plant is only one of 140 such cultivated plants to bloom in history.

The university has set up a live Web stream of the corpse flower so that remote fans can take a gander.

Story continues below slideshow.
PHOTOS: THE FLOWER IN BLOOM

Corpse flowers first bloom around the time they are 7 to 10 years old, and then every few years or so after that.

When it does bloom, the flower emits a powerful odor that smells exactly like rotting meat — hence the name.  In the wild, the odor and deep purple color of the leaf that unfolds entice pollinating carrion beetles and flesh flies, which normally feed on rotting flesh.

In cultivation, researchers have to play the part of the insects and hand-pollinate the flower.

The giant 'petal' that opens is called a spathe, and the center spike is called a spadix. The 'flower' is actually thousands of tiny flowers, which botanists call an inflorescence.

Corpse flowers are traditionally named, and the Kenneth Post Lab Greenhouses at Cornell where the plant is housed are letting fans vote on a name for theirs. Voting is open until 1 p.m. ET, and the options are: Big Red (Cornell University's mascot); Uncle Ezra (one of Cornell University's founders); and Wee Stinky (after a small stream on campus).

Those nearby can also stop by and take a look at the odiferous flower in person, though officials ask that visitors not wear any kind of fragrance. 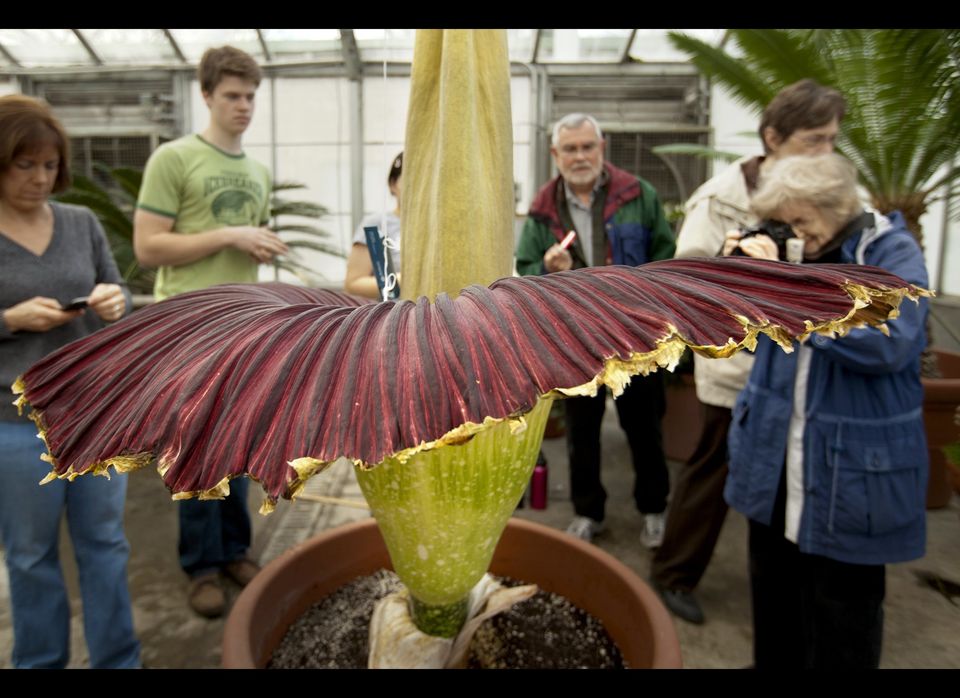