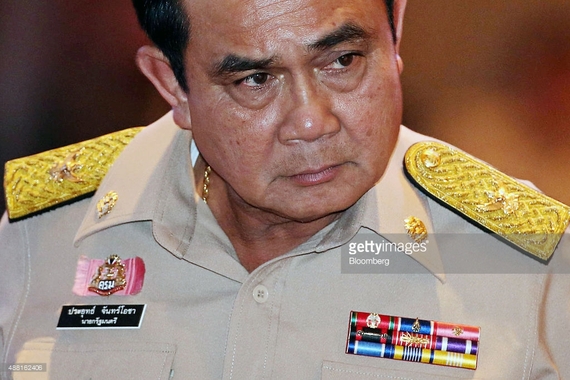 The Thai junta is using the lèse majesté law to conceal their own corrupt acts. Since the National Council for Peace and Order (NCPO) fomented a coup and seized power on 22 May 2014, there has been an increasingly draconian constriction of freedom of expression and civil and political rights. This has included record numbers of prosecutions under Article 112, the measure of the Criminal Code which describes the crime of lèse majesté and stipulates punishment of three to fifteen years imprisonment per count. After nineteen months in power, the junta, which claimed to enter power to reform and clean up the mess made by corrupt politicians, is facing its own corruption scandal. But rather than investigate it transparently, the junta has instead further cracked down on civil and political rights.

It has recently become apparent that the junta has engaged in corruption in the construction of Rajabhakti Park (the park that is a display of loyalty to former kings). The corruption consists of the use of government funds in excess of the actual cost and embezzlement of funds into their own pockets.

Even though individuals involved with the construction of the park acknowledged the presence of corruption, General Prayuth Chan-ocha, the prime minister and head of the junta, denied its existence. He did not offer an explanation for his assertion. This caused the people and students to use symbolic action to pressure the government (i.e., the junta) to carry out a true and proper audit of the project and punish the wrongdoers.

General Prayuth was very displeased with the people and students who did so. This was apparent in his angry mood when journalists asked about the chart linking individuals involved in corruption (in which General Prayuth and his close associates were included). Subsequently, people who shared this chart on social media were arrested. Under the principles of Thai law, the alleged crime of sharing the chart cannot be graver than defamation of ordinary individuals, but in this case, the junta adapted Article 112 of the Criminal Code, the measure which criminalizes lèse majesté to use against those who shared the chart. The junta has claimed that the actions of clicking like and sharing the chart on Facebook constitutes lèse majesté. This is a grave accusation in Thailand due to the lengthy prison term it carries. What is truly frightening, however, is that two individuals accused in this case have already mysteriously lost their lives prior to even a court judgment being rendered.

The junta is well aware that connecting the sharing of the chart displaying corruption in the Rajabhakti Park project with violation of Article 112 will make the issue slip away. No one will dare to examine corruption in the Rajabhakti Park project any further. This is because when a person is prosecuted under Article 112, Thai society is prepared to be silent and condemn the accused as disloyal to the monarchy. This strategy has resulted in swift success for the junta. When the issue shifts from one of corruption to one of lèse majesté, no one will remain interested in whether or not the NCPO is corrupt. They will only be interested in whether or not those who engaged in symbolic action to prompt an audit of the corruption are loyal to the monarchy.

In the end, the audit of the junta's corruption will arrive at a dead end. No one will dare to demonstrate any further how the junta engaged in corruption in the Rajabhakti Park project. The junta is therefore the sole class in Thai society that is able to get away with corrupt use of the people's tax money without anyone daring to come out to audit them.

Rangsiman Rome is an MA student in the Faculty of Law at Thammasat University. Along with thirteen other students, he was detained for twelve days after peacefully protesting the junta in June 2015.