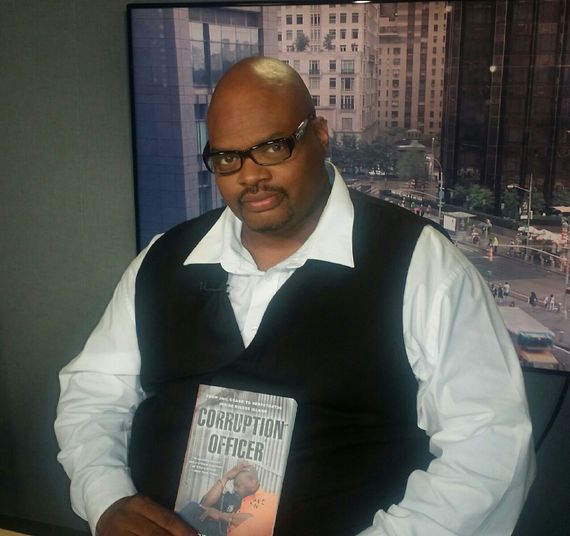 There are few people in the world who live fairy tale lives and Gary Heyward isn't one of them. His story is nothing like you have ever heard before and once I tell you why you will totally understand. He penned this book called 'Corruption Officer.' The memoir of sorts is a detailed look at his life, the struggle after returning home to New York City after the war, and the job that he imagined would take him out of the depths of poverty and put him and his family inside the realm of living a modest and comfortable life. Gary Heyward grew up in the Harlem Polo Ground projects and he wanted desperately to get out of the projects and live a better life. That opportunity came when he applied to become a corrections officer at Riker's Island. In his book he details the moment he received word that he had been accepted into the officer academy. "It was such a tremendous joy," Heyward tells me during our interview, "When I got the letter that I was going to the academy, it was like I hit the lotto, I felt it and my mother felt it," he continued. That joy would only be short lived because the pressures of family life and providing for his children got the better of Heyward. Corruption Officer takes you on a journey of happiness and pure bliss to hitting rock bottom and landing a decorated war Veteran to serve time in a place just like the one he worked in. After reading Corruption Officer I sat down with Gary Heyward to talk about the book, his time in prison, and how he bounced back with a message he hopes will touch lives and keep people walking the straight and narrow.

KM: Gary, thank you very much for the opportunity to speak with you. I want to dive right in; it appears that when you first started as a Corrections Officer you followed the lay of the land. You wanted to do right by this job?

GH: Absolutely, my thought was I wasn't going to screw up this job for anything. At first I was very apprehensive, you hear the stories about jail, you see the movies about jail, and even the training you receive before going to Riker's Island is scary. So of course I wanted to be the best officer I could be.

GH: Mentally you need to prepare yourself that you are in jail but you a guard and not an inmate. You haven't been sentenced to any time and anytime you feel like you can take this shield off and request for them to open the door and let you out.

KM: In the book I read how over time you felt that you had no choice but to start to turn to your corruption ways. Just to give readers some perspective and without giving all of the book away, you ran a highly sophisticated drug and prostitution operation inside of the jail involving inmates and other correction officers. Did the job and the importance of it, where you came from, not stop you from taking that path?

GH: It was, it really was because going in it was not in my plan to end up an inmate at all. My first observation was I'm a correction officer, I took the oath and I'm supposed to uphold that oath. With time with just like any other job you see how other correction officers work and how inmates work that then my high sense of urgency and the wall I had up started to come down.

In the book, once Heyward started to let his guard down that's when things take a dramatic turn. He was the ringleader of a drug operation that would eventually get him caught and later sentenced to prison. Heyward also had female correction officers sleep with inmates and he would collect money from inmates once the deed was done. All of this would eventually catch up with him. Heyward talks of the moment he got caught on video tape making a drug transaction with the relative of an inmate. That's how he received the drugs that he smuggled into the jail in order for inmates to sell to other inmates. This major operation carried on for years before anyone was hip to it and when people started to catch on it was only a matter of time before the money empire he had built around him came crashing down.

Now Heyward wants to share his story with others, especially correction officers in hopes that his story might be the one thing that keeps another person from making the same mistakes. Corruption Officer is a good read and I would have to say an important read for anyone going into law enforcement in the prison sense. Heyward does a good job of inviting the reader into what it is like to have to monitor inmates all day and all night and some of the most compelling parts of the story center around people who Heyward knew on the outside from his hood before becoming a corrections officer. The book is definitely something you can breeze through in a weekend and furthermore you will absolutely walk away thinking about how you don't want to end up in the same situation. Heyward with his back against the wall did what he thought at the time was beneficial to his livelihood and that of his family. Take the journey with Gary Heyward and you will learn things that you maybe did not know about the jail system but most importantly you will leave fully committed to the fact that there is such thing as second chances.