In June of 2012 -- then Newark Mayor Cory Booker told the Star-Ledger "I've always been very compelled about the democratizing force in social media that is getting more voices engaged in the larger dialogue." He said that #waywire was conceived to be a "way for people to consume information, ideas, and media, but more importantly also to let their own voices be heard, engage in a different way."

This was four years ago, long before the rise of Reddit as a political force driving r/the Donald and rise of the so-called 'alt-right.'

Long before Donald Trump knew what Twitter was -- Cory Booker was using the medium to communicate with his constituents. Booker understood the power of social media as both a working politician and social media participants. Today Booker has 2.06 million Twitter followers. Booker told FastCompany: Millennials "want to see news and information coming not only from trusted news sources." They also want to see "opinions, ideas, and values that other people have about that news and information. We created a platform -- a new social stream -- for consuming information and ideas," Booker said. "But also for individuals to engage in that information and to participate in a more significant way." 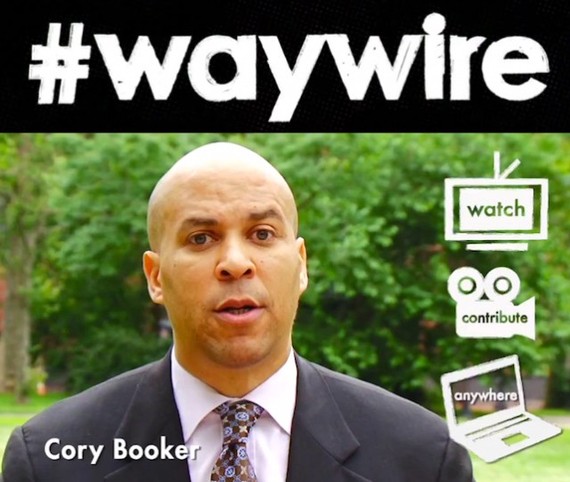 "I've always been very compelled about the democratizing force in social media that is getting more voices engaged in the larger dialogue," Booker said, billing the site as a way for millennials "to let their own voices be heard, engage in a different way."
"If we can find a way to empower people to talk about their issues, ideas and passions that they're concerned about, then we can find a way to further advance change," Booker told NJ.com.

"The goal is to get [youth] involved in changing their communities and the world," he added. "It's not about getting them engaged in other leaders, but to be the voices of change themselves. I always believe the power of the people is greater than that of the people in power" said Booker.

As he explained it to Mashable: " what we need to start doing is finding ways to give more people the tools necessary to influence the world around them, not let them be drowned out, glossed over or ignored. When you let their voices be heard, it becomes less ideological, you're opening arteries and dialogue, it becomes infinitely more pragmatic about getting things done and making a difference."

"One of the big things that we feel is missing for millennials is the ability to contextualize news and information that matters to them," co-founder Nathan Richardson told Fast Company. "The best way to think about it is a media platform for Millennials; It's a network where they can contribute videos and they can discover videos."

If the Waywire concept rings a bell in your head, it may be because bears some similarity to Current TV, a cable channel co-founded by former vice president Al Gore in 2005. I worked with Gore on Current back then, basing it on the work we'd done with MTV Unfiltered to bring UGC to young content creators. Like Waywire, Current sought to make socially conscious programming engaging for younger viewers, inviting the submission of user-generated content on the website. But unlike Waywire, it was mostly a linear cable TV network -- not a social media driven enterprise.

Now, how did Booker's Waywire vision turn out? Well, it turns out that driving CPM's and video views is hard. And harder still when you try and embrace the goals of social activism. So Waywire evolved to become a SaaS platform with great partners and a broader agenda. The evolution left the goal of empowering millennials behind. In hindsight, that's a decision I regret.

Today, with Facebook driving a new generation of news and conversation, and Reddit and 4Chan now central to the conversation, on this is absolutely clear -- Cory was right.

And that's worth remembering.