As a state legislator, Cory Gardner was a consistent opponent of reproductive freedom for Colorado women. He backed abortion bans that would put doctors in jail for 4-12 years and would force rape and incest victims to carry their pregnancy to term. He opposed Medicaid funding for emergency contraception. He backed ballot measures that would ban abortion in all cases, and many forms of birth control, by making a fertilized egg a person under state law.

In Congress, he's a co-sponsor of a federal personhood bill, the Life at Conception Act, that would do the same thing. Colorado's Big Media blog checked statements from co-sponsors of the bill, one of whom said, "This bill strikes at the heart of the Roe v. Wade decision by declaring life at conception, granting constitutional protection to the unborn under the 14th Amendment."

So when Cory Gardner's campaign tries to say the federal anti-abortion, anti-birth control bill isn't the same as the state personhood bill, we ask: do you really think Colorado women and Colorado voters are that dumb?

Not only does the federal "personhood" bill use the same language as the Colorado "personhood" bills Gardner has supported, it's actually worse. It would take Colorado's extremist attempt at an abortion ban and a contraception ban to national level and try to overturn our Constitutional rights to make our own health care decisions.

So who does Cory Gardner think he's fooling?

There is yet another abortion and birth control ban under the guise of personhood on the ballot this year. Once again, for the third time, Colorado voters are going to have to tell politicians that no means no. We believe our most personal, private medical decisions belong to us, not to politicians.

And this includes politicians like Cory Gardner who are trying to deceive voters with election-year weasel words. 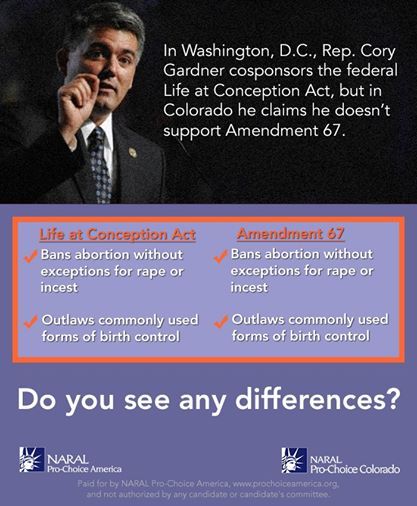