We love to rant and rave about the excessively vigilant Advertising Standards Authority, the UK's ban-happy media watchdog. But we have to admit: we actually support the agency's latest move.

The Guardian reports that an advertisement for plastic surgery has been prohibited because it slyly targets young, impressionable girls.

The ad is made to look like a magazine cover with the word "COSMETIC" emblazoned across the top in neon print, looking nearly identical to another familiar phrase: "COSMOPOLITAN."

Below, written like magazine cover lines in pink and aqua, the ad promotes "BOOB JOBS" and "SAME DAY SURGERY" with the pithy tagline, "get more, pay less!"

Campaign reports that the clever poster, displayed at bus stops in London, was part of a new campaign by Spire Healthcare for a same-day plastic surgery service at one of its 37 private hospitals.

But it had not been approved by the necessary authorities -- and therefore got hit by the ASA.

According to the Guardian, the ASA received 10 formal complaints about the ad, which argued that it irresponsibly targeted young women and made light of cosmetic surgery. Thus the ASA's ruling that Spire's spot "conveyed the message that breast surgery was a straightforward, risk-free lifestyle decision" for young, impressionable girls.

While the ASA often gets unnecessarily strict about sexy photos or other debatably inappropriate ads, this one seems fairly unequivocal: made to look like a fun, lighthearted Cosmo cover, Spire's surgery spot is aimed right at teen girls who will embrace its bubbly headlines.

But that's just our take -- what do you think? Check out the ad below, plus a round-up of other ASA targets. 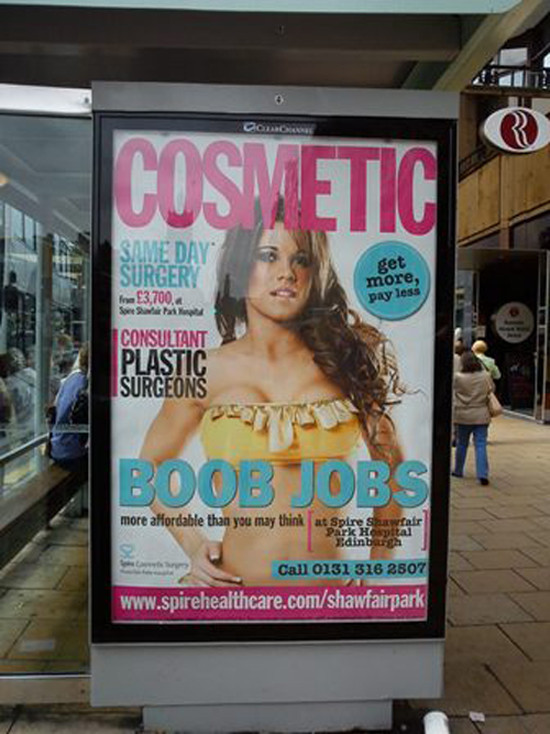