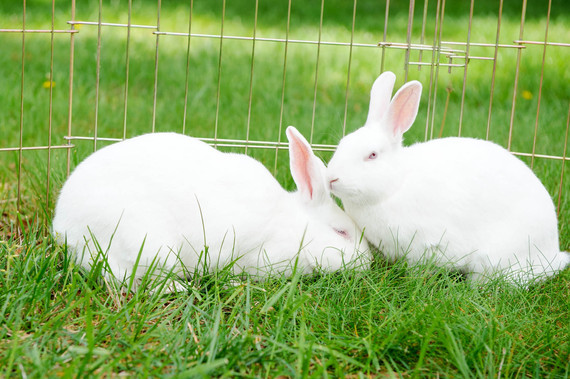 The announcement that PETA UK has accused nine leading cosmetics brands of breaking European law by selling products tested on animals for the Chinese market is very disturbing, if not surprising.

European Union law bans the sale of any cosmetic product that has been tested on animals in finished form after 2004, as well as cosmetics containing ingredients subject to new animal testing after 2013.

There are many beauty companies, including my own, that have not entered the lucrative Chinese market because of these animal testing implications. Other companies including Estée Lauder and similar big brands, say they do not conduct or commission tests on animals unless required to do so by law or national authorities. However, the choice to export or market cosmetics in China with all its animal testing requirements is a choice to be part of the animal testing problem rather than part of the solution.

The Humane Society of the United States (HSUS) and Humane Society Legislative Fund (HSLF) are committed to ending cosmetic cruelty through the #BeCrueltyFree USA campaign. They led the legislative effort to introduce the Humane Cosmetics Act, which if enacted would prohibit animal testing for cosmetics in the U.S., as well as the sale of cosmetics or ingredients subject to new animal testing in other parts of the world. The EU, Norway, Israel, India, Turkey, New Zealand and South Korea are leading the way with bans already in place, while Canada, Brazil, Australia, Taiwan and other countries are queuing up with similar legislation of their own as part of the global #BeCrueltyFree effort led by Humane Society International.

What consumers need to do is show a strong preference for cruelty-free cosmetics. Companies like Estée Lauder and Gucci will only respond if animal testing has an impact on their bottom line.

I would like to take this a step further. At PRAI Beauty we believe in supporting animal welfare causes. In fact, we have done shows on home shopping networks in the U.S., Canada, the UK, France, Italy, Germany, Japan and Australia where we donated a portion of our proceeds to help animals. I would invite other major skin care companies to do the same.

There are some fabulous organizations out there doing great things for animals, and they could use a little help. Consider the work of Nowzad Dogs, which re-unities soldiers with the dogs they befriended in Afghanistan. The organization won the CNN Hero award in 2014. We also support SPANA, an organization that helps working animals. Donkeys and mules are essential to the livelihood of people in poor countries, but without proper veterinary care, the animals will become ill and unable to work, which can have a devastating impact on their owners. Canine Companions for Independence is a wonderful organization that provides free service dogs to people with disabilities, including soldiers who have been wounded in combat.

In all PRAI Beauty donated more than $200,000 in 2015 alone to help animal causes. This investment in animals is part of our DNA and I believe it is one of the reasons PRAI Beauty is successful.

Let's make 2016 the year where we end animal testing and make the world a better place for all animals.