A dense cloud of gas 50 million light-years away has astronomers buzzing, and they're using all sorts of strange metaphors to get the rest of us to pay attention.

They've discovered what they think may be a globular cluster -- a big ball of up to one million stars -- on the verge of being born.

“This remarkable object looks like it was plucked straight out of the very early universe," Dr. Kelsey Johnson, an astronomer at the University of Virginia in Charlottesville and lead author on a paper about the research, said in a written statement. "To discover something that has all the characteristics of a globular cluster, yet has not begun making stars, is like finding a dinosaur egg that’s about to hatch.” 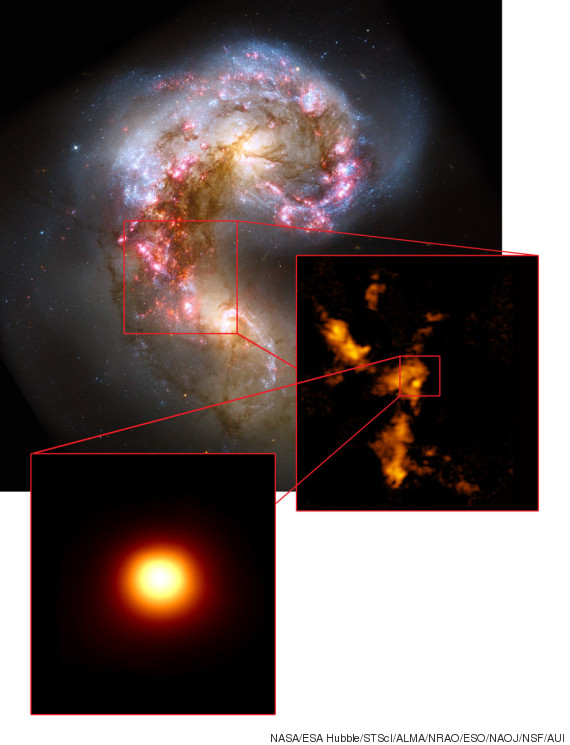 The Antennae galaxies, shown in visible light in a Hubble image (upper image), were studied with ALMA, revealing extensive clouds of molecular gas (center right image). One cloud (bottom image) is incredibly dense and massive, yet apparently star free, suggesting it is the first example of a prenatal globular cluster ever identified. 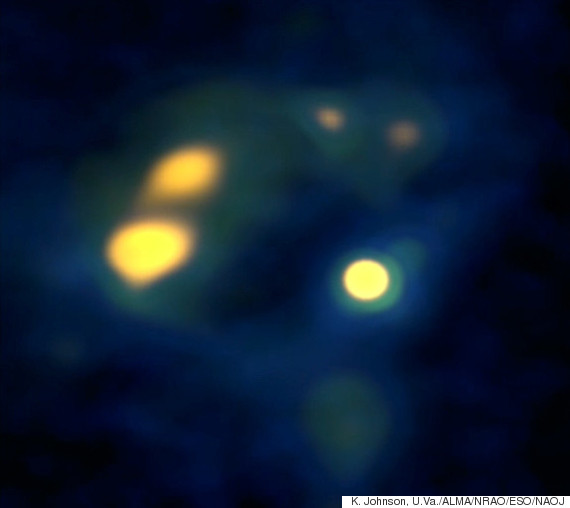 ALMA image of dense cores of molecular gas in the Antennae galaxies. The round yellow object near the center may be the first prenatal example of a globular cluster ever identified. It is surrounded by a giant molecular cloud.

Johnson and her colleagues spotted the bizarre object, which they call the "Firecracker," using the Atacama Large Millimeter/submillimeter Array (ALMA) in the Atacama desert in Chile. It's located inside a pair of interacting galaxies known to scientists as NGC 4038/NGC 4039, or The Antennae Galaxies.

The Firecracker has a mass that's 50 times that of our sun, and is under an enormous amount of pressure -- roughly 10,000 times greater than the average pressure in interstellar space. According to the researchers, this makes it a good candidate for collapsing into a globular cluster within the next million years.

What do other scientists make of the discovery? Dr. Alison Peck, ALMA scientist at the National Radio Astronomy Observatory, who was not involved in the new research, called it "important" and said she was "really excited to hear about these results."

"One of the things that we all yearn to understand is how our surroundings formed, how our galaxy and our solar system came to be. To do this, since we can’t actually watch things change over time, (it just takes too long), we need to find similar objects at different stages of development and compare them. What Dr. Johnson’s team have found here is an analog of an object that we look for in the very early universe, but they’ve found it so close by that we’ll be able to make extremely detailed observations and find out much more about the physical conditions in this exciting region."

The research is set to be published in the Astrophysical Journal. A pre-print version of the article can be viewed here.