With the fleet of telescopes in space and giant observatories on the ground, we are in what many consider to be a golden age of astronomy. These powerful telescopes produce thousands if not millions of images a year, some of which make their way into the public realm. We see them on billboards, in commercials, and across computer and tablet screens everywhere.

Many of these images are spectacular, but what does it mean if the planets are pink or the galaxies are green? Are these colors 'real'? 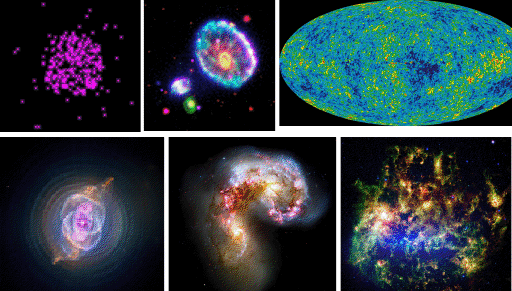 The reason this is a good question to ask is because color is important. It's the way our minds function everyday in a cultural context -- from the red traffic light telling a driver to stop, to the yellow tinge of a baby's skin being a clue to jaundice, or a green hue in the sky warning of bad weather.

But before we delve into color, we first have to think about light. When astronomers talk about light, they aren't referring just to the kind humans can see with their eyes. This is a teeny tiny fraction of the light that exists. There are many kinds of light, from radio waves to infrared light to X-rays and gamma-rays.

Each of these different types of light reveals something unique about the Universe. For example, infrared light generally shows cooler objects, while hotter and more energetic things give off X-rays. In order to truly understand and explore the Universe, astronomers need to collect all types of light.

Take an Alien to a Baseball Game

Imagine that an alien has landed on our planet. It's your job to bring him/her/it directly to a baseball game -- blindfolded -- and to get the alien to understand this game. You lift the alien's blindfold, but for some reason, the alien can only see a sliver down the third base line. From this viewpoint, you ask your new alien friend to tell you not only the score, but also the number of players, the rules, and so on. Our poor extraterrestrial visitor would have a tough time working it out -- and would probably look for some excuse to leave. If the alien could see the whole field, however, then he/she/it would have a better chance of figuring out the game.

The analogy to studying space is that visible light represents only looking down the third base line. All of the other types of light, from radio waves to gamma rays, fill in the rest of the field. As is certainly true of baseball, it's still tricky to understand all of the rules of the Universe, but it's a lot easier when we can get a full picture.


In the past, astronomers used to capture images on film. Today, most data from all types of light arrives digitally in the form of 1's and 0's. Scientific software then translates that data into a visual representation of the object, that is, an image.

If we stopped here, then this is how the images might appear. They are certainly of use to the astronomers who have intensely studied these objects, but they can be less useful for others outside that specialized community.

In order to make sense of these images, most of us need more information, such as color. The choice of color, however, can be confusing and, sometimes, controversial. But since we are talking about coloring data that are generally invisible to the human eye, there is really no right or wrong color for these data, there are simply choices to be made.

Often, scientists choose colors to represent certain scientific phenomena such as structures that appear in one wavelength and not another. This might be why the planet is pink or the galaxy green. Or they might want to show where different elements like iron or magnesium are found in an object, and they can demonstrate this by assigning the sliver of light for each in different colors, as in this X-ray image [G292] 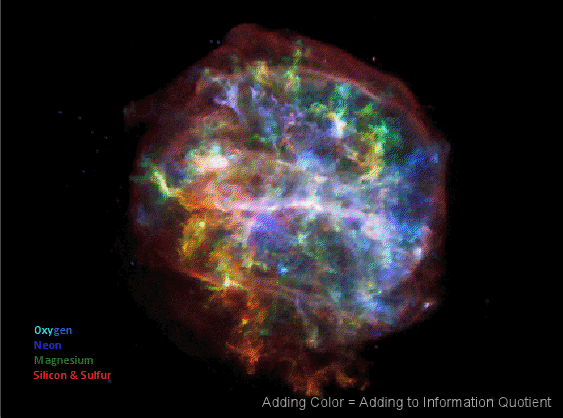 This is an X-ray image of the supernova remnant G292.0+1.8, the aftermath from the death of a massive star. Each color represents elements that are found in slices of X-ray light.Credit: NASA/CXC/Penn State/S.Park et al

In other instances, colors are picked to make an image the most pleasing or beautiful. In some of these instances, cries of the images being faked can erupt. But they are not fake, no matter what colors are used. We can't see these data without scientific tools and processing. The color in these images enhances the data but does not alter them.

We've done some research into how people -- non-experts and professional astronomers -- react to these images. This research is showing us what leads to effective choices and what can lead to confusion. For example, things that are hotter give off blue light (think of a really hot flame), and most astronomers represent it that way. However, most non-experts see red as being hot and blue as a cool color. Unless the final color choice is explained well, it can be confusing and off-putting. We are in the business of getting people excited and engaged with science, which means we must pay close attention to how images are perceived and understood.

The images of the cosmos are fascinating for many of us, and color is a tool that helps us see what cannot otherwise be seen. But look at the captions that run with the image -- they should provide you with guidance to what you are seeing. If they don't, question the producers of the piece. These images are like postcards from the beyond, showing us glimpses of what is out there. We can look at pink planets and green galaxies to our heart's content, but if the postcard has a postmark and a hand-scribbled note, we'll probably like it better.

Kim Arcand and Megan Watzke have spent a combined 30 years in communicating astronomy to the public. They are co-authors of Your Ticket to the Universe, which is being published on April 2nd by Smithsonian Books.