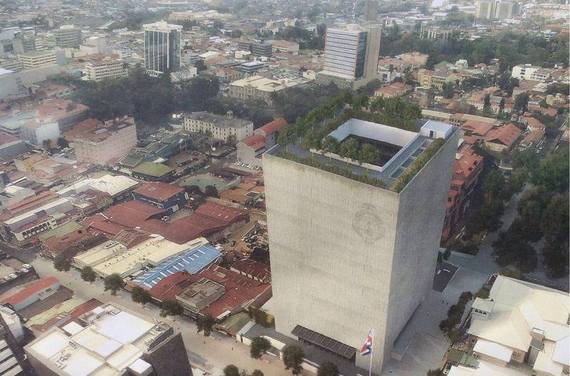 A specter is haunting Costa Rica - the specter of brutalism. Almost all the obstacles have been lifted for the construction of a new building for the Legislative Assembly, but the design has been nothing short of controversial. Taking its cue from the grandiose concrete monstrosities of the brutalist era in the 1960s and 70s, one could be forgiven for thinking the design by local architect Javier Salinas is the new headquarters of North Korea's secret police, rather than the gathering place for lawmakers in Latin America's oldest and most stable democracy. The 21-story building has been criticized on all grounds, starting from the fact that it lacks outward facing windows, features deficient air circulation, and that it will be built close to a heritage site (the National Museum). It's just plain ugly.

Although the current Assembly building is nothing to brag about either, one has to wonder how it is possible that a design more fitting for a German bunker on Omaha Beach managed to "win" the bid for the most important public building in the country. San José may be one of the most pleasant cities to live in Latin America as this author can attest, but it has a dearth of good architecture to go with its quality of life (fifth in the region according to Mercer) which makes this a major missed opportunity for beautifying the capital. Perhaps fittingly, however, it could end up being one of the few physical legacies left from the rather disappointing term of the president, Luis Guillermo Solís and his party, the Partido Acción Ciudadana.

From honeymoon to divorce?

Just how disappointing? The president's popularity numbers speak for themselves. According to the Universidad de Costa Rica's latest survey (January 2016), Mr. Solís's approval ratings currently stands at just 16.8%, making him one of the most unpopular presidents in the hemisphere. At the same time, his disapproval ratings have skyrocketed to 62.8%. This frustration over his government's lack of leadership and direction is a far cry from the optimism of the summer of 2014, when his storybook electoral victory (Solís's PAC broke over six decades of uninterrupted bipartisan rule by the Partido Liberación Nacional and the Partido Unidad Social Cristiana) raised hope of a new chapter in Costa Rica's political history after years of increasing ideological polarization, legislative gridlock, and a turbulent relationship between the executive and the opposition. Unfortunately, it feels as if nothing much has changed.

Most worrying is the inaction on Costa Rica's most pressing economic problem: the fiscal deficit which in 2015 hit a record 5.9% of GDP, the highest since the current data series began in 1991 and the third straight year in which it has breached the 5% mark. Solís made perhaps the most significant blunder of his presidency so far by purposely delaying a fiscal reform until halfway through his term (which is right about now), thereby squandering his initial political capital. It has also not helped that he appears unwilling to tackle both sides of the budget; his proposed reform is skewed heavily on the revenue side (i.e. higher taxes) and too little on needed spending cuts which the opposition is demanding. These are necessary. Spending has gone up by almost 6% of GDP since 2007, almost all of it on wages and transfers which are not the most productive use of the country's resources. And it's not just the opposition wanting a more balanced reform, the PAC's influential founder Ottón Solís has occasionally sided with his rivals on fiscal matters much to the embarrassment of the executive.

Ultimately, the president's intransigence could spell doom for the reform, joining the failed attempts of his three predecessors in doing so. At this point, it should be obvious that the marginal benefit of leaving his spending targets untouched is not remotely comparable to the disaster that would be if the reform failed to pass. Right now there are three possible outcomes of the reform debate:

Right now, the odds are on number 2, but it's not too far-fetched to think that the worst case scenario could materialize instead.

It is difficult to assess what will be the long lasting damage of a failed Solís presidency. Certainly it will not help reverse the prevailing state of gloom by Costa Ricans who have benefited little from the country's political diversification after decades of bipartisanism. Costa Rica is unique among Latin American countries in that it has a mainstream libertarian party, for example, as well as a party focused on the interests of disabled people. There are no less than three evangelical Christian parties with a seat in the legislature. Like most Latin American countries, it now has a radical left party but also a sensible, centrist left, and its right-wing is also quite moderate compared to others in the continent. But the cost of this tyranny of (electoral) choice has been gridlock, since the country's democratic institutions have not evolved enough to accommodate its 21st century pluralism.

In many respects, tiny Costa Rica still towers above its neighbors. It is among Latin America's most affluent societies, crime is well below the regional average, and its education levels have given it a distinct economic edge in hi-tech manufacturing. For all its present political dysfunction, it is a remarkably stable state, with no serious internal or external conflicts and with few material threats to its democracy. But the country simply isn't moving forward the way Costa Ricans rightfully expect it to, and the political establishment appears only more willing to shield itself behind a concrete wall of partisan and ideological interests rather than accept certain compromises for the sake of progress. San José's soulless, unwelcoming new legislative building seems to be the perfect visual metaphor this state of affairs. Which leads one to think that the specter that is haunting Costa Rica isn't just brutalism. It's stagnation.