"I want to create a website; its name will be Yatzer."

Those were the first lines that Costas Voyatzis wrote in a notebook while on his daily 2:00 - 5:00 a.m. shift during his mandatory military service in the Greek army. That's how it all started in 2007. Now, nearly a decade later, I'm sitting in his art filled living room, beside the twinkling lights of his beautifully decorated Christmas tree, while he recounts with apparent awe and a great big smile how his growing web empire began with little more than determination and creativity. 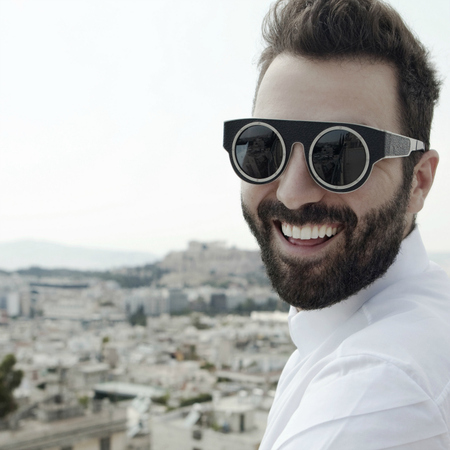 "After two years of studying physics, I broke the news to my parents that their son is never going to be a scientist," he says. So, he started working in interior décor magazines in Athens while he pursued his passion studies in interior design. "Then, I got drafted in the military--the biggest shock of my life!" He worried about losing the relationships he'd cultivated in the design world. "After that year of mandatory military service, I knew nobody would remember me. What was I going to do?" The idea to start a blog came from his necessity to keep relevant with what was happening in the design world.

But why Yatzer? "My last name is Voyatzis and when I was a kid my friends used to call me, Voyatz-er." But the significance of the name unknowingly turned out to be a lot deeper than that. As the question goes, "what's in name?" Costas recounts how 3 years later he was visiting Tel Aviv and he handed a gentleman his business card. The man looked at it and declared that no matter what Costas was doing it must be very successful. Perplexed, Costas asked what he meant, only to find out that in Hebrew the word "yatzer" is slang for, "to think about something before someone else." Naturally, Costas was amazed. "I started researching and googling the word myself," he tells me, wide-eyed. "I discovered that it's even used in the Bible as the word for 'creation.' I double checked with a couple Jewish friends of mine who confirmed it!" Apparently, there's a lot in a name.

To call Yatzer.com, Costas' now internationally acclaimed design and travel website, "very successful," would be an understatement. Highly esteemed publications worldwide (such as The Financial Times, British Vogue, ELLE Décor, among many others) consistently list it as one of the top online design destinations. Costas himself has even been named as one of the 100 most influential personalities in the design industry by that fundamental bible of design, Architectural Digest. The credibility and expertise he's gained from Yatzer have afforded him the opportunity to collaborate with heavyweight industry players, such as Van Cleef and Arpels. He's also just been named Curator of the Art Shop at the Museum of Cycladic Art in Athens. The site itself has even recently undergone a stunning yearlong makeover under Costas' creative direction and in collaboration with UI and UX designer, Filippos Protogeridis, and web developer, Alexios Panagopoulos, with the support of several volunteers as well as Yatzer's staff members.

"It's amazing," Costas says with much apparent wonder. "Everything started from a dot; like a drop of water that rippled," he tells me when I ask how Yatzer has reached this level of success. "It's grown organically. I've never paid for advertising, not even a single keyword in Google. I only give selective interviews." So, there's no secret formula? "From the start I've always been very polite and respectful of the content I publish," he offers.

In person, Costas is one of those humans with a contagious laugh and ready smile who you feel you've known forever even if you've just met. When he talks about Yatzer, you can sense his passion for what he does as well as palpably see his wonder that it's taken him where he dreamt; perhaps even beyond. This sense of excitement and marvel is also what a reader feels when they enter his site; it's a friendly and inviting destination that brings its subjects to life and instantly shrouds them with a familiarity.

"I'm living in all the things I publish," he says. "I always publish stories about art I'd love to buy, but can't afford; architecture I'd love to live in; places I want to travel to, but haven't yet." Despite the fact that Yatzer is now fully profitable and able to sustain both full time and freelance employees, Costas still chooses everything that is published himself. "It's my world," he admits. "An extension of me; my digital soul and mind." From the start he had a clear vision. "I decided to focus on design, architecture, art... on beauty and inspiration in general. That's what I want to share with the world." Fittingly, his motto is, "Design is to Share." "I love sharing," he admits referencing the inspirational quotes that greet visitors on the homepage and are new each day.

His dream was to create the best design reference in the world of internet. "I think I've accomplished about 60% of my original vision," he tells me. "And now, so many new things are launching with the site redesign, such as the City Guides (in January). I feel like a startup with 8 years of experience!"

One of his favorite moments is when he meets somebody who has no clue about Yatzer.com and he gets to introduce them to this world. I think it's safe to say that they get hooked.

"I love it," he says earnestly. "It was never a business; even when I didn't have money to buy food. It's not like 'work.' Thanks to the Yatzer 'passport,' I have access to places I never imagined I would and get to travel every week. I've gone to all continents now except Australia. But that's on my list!" he says and shares one of those famous, ready smiles of his. I sort of get the feeling that whatever Costas writes down tends to get accomplished!