Costco has issued an apology to Fox News, stating, "Costco's distributor mislabeled a small percentage of the Bibles, however we take responsibility and should have caught the mistake. We are correcting this with them for future distribution. In addition, we are immediately relabeling all mislabeled Bibles. We greatly apologize for this error."

Elizabeth went to her mother Lorraine with a vexing question. She had just completed her weekly reading assignment, and wasn't sure about which category her book fell under: fiction, or non-fiction. Lorraine also had a tough time answering the question, because the book they were wondering about was the Bible.

They're not the only ones who have wondered whether the Bible falls into the category of fiction or nonfiction.

Costco recently roused the ire of Pastor Caleb Kaltenbach when he discovered a stack of Bibles with a 'Fiction' sticker at their Simi Valley, Calif. location. He told Todd Starnes of Fox News, "All the Bibles were labeled as fiction. It seemed bizarre to me." 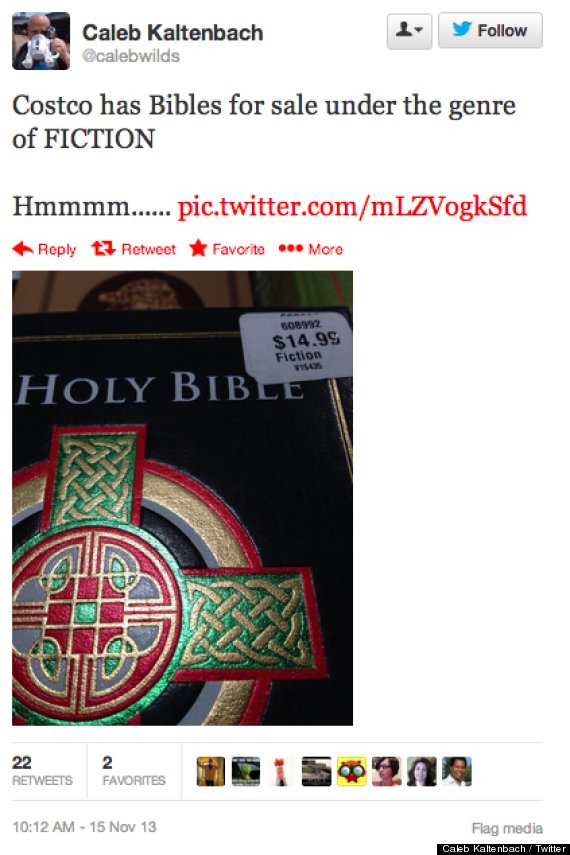 Kaltenbach is the lead pastor at Discovery Church, a non-denominational Christian congregation located in southern California. He told Starnes, "People are pretty shocked and upset. We are supposed to be living in an era of tolerance, but what Costco did doesn’t seem too tolerant.”

A Costco representative told Starnes that there was a "human error at a warehouse," and that it was "all fixed." However, as of Nov. 18, Starnes reported that there was still "a boatload of Bibles in the Simi Valley store still marked as fiction."

The labeling issue needn't be so black and white, feels Kaltenbach. “If they don’t believe in the Bible, that’s fine – but at least label it as ‘religion’ as some bookstores do, or ‘inspiration’,” he said to Fox News.

Starnes raised the issue to pastor and author Robert Jeffress, who said, "Let’s hope Costco’s explanation is true and not the result of having been caught attempting to marginalize the very foundation of Christian beliefs, the Bible. Christians need to call out organizations like Costco whose actions undermine Christianity – regardless of whether those actions are accidental or intentional.”

What do you think? Weigh in here: