If you graduated from high school but didn't go to college, Costco may be the best place to advance your career, according to a new survey from career website Glassdoor.

Of all companies with 40 or more reviews for "career opportunities" by employees whose highest level of education was high school, Costco ranked number one in Glassdoor's ranking. Whole Foods, Chipotle, Publix and Nordstrom all tied for second place. 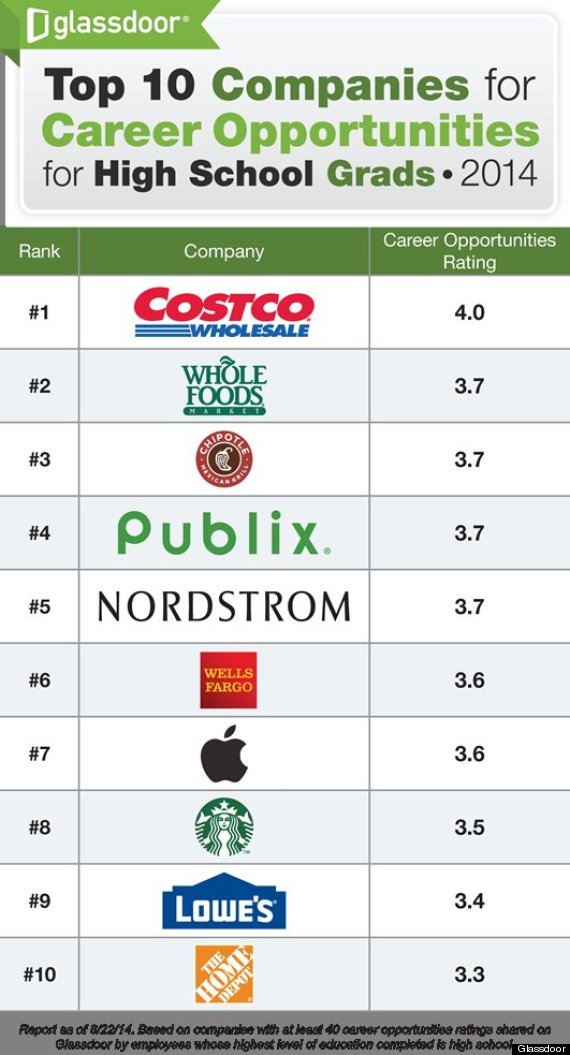 Costco has earned a reputation of treating its workers well and providing room to grow within the company. The company pays well above the minimum wage, and Costco CEO and President Craig Jelinek has been a vocal advocate for raising the national minimum wage. Roughly 9 out of 10 employees have company-sponsored health care and pay is much higher than industry peers like Wal-Mart owned Sam's Club.

And the statistics speak for themselves when it comes to upward mobility within the company: More than 70 percent of Costco's warehouse managers began their careers working the floor or the register, according to Business Week. Costco will often opt for internal hires rather than MBA grads from the outside world.

It's worth noting, however, that this survey only covers large, usually name-brand companies whose employees regularly submit reviews to Glassdoor.com. Other jobs at smaller companies or government agencies can be paid much more (or be happier) than Costco workers.

Overall, however, the value of a high school diploma has eroded, especially when compared to an undergraduate degree. Those who only attended high school are increasingly more likely to be unemployed, earn less, live in poverty and be less satisfied at work, according to numerous studies.