Yesterday I pointed out that adding in federal taxes and transfers does not much alter the trend in inequality over the last few decades. This morning, I'd like to feature another look at the costs of inequality--again, after accounting for taxes and transfers--in terms of income losses to the bottom 80 percent of households.

The figure below, from CBPP, is constructed as follows. Take the average after-tax income growth (in real terms) over the period covered by CBO's comprehensive data series (1979-2010), which happens to be 58 percent. Apply that value to the 1979 value of each income class--in other words, assume every household's income grew at the average rate. That's the same as saying inequality was constant over these years.

Then, plot the difference between that simulated rate and the actual income value in 2010. That value, shown in the bars below, represents the costs of inequality (incomes growing slower than average) to most households and the benefits to those at the top (income growth faster than average).

The lowest income households, those in the bottom fifth of the after-tax income scale, lost $1,500 over these years. Middle-income households lost $9,500. Households in the top 1 percent, whose incomes grew 3.5 times faster than average, gained a cool $482,000.

Occasionally I run into people who want to argue that the increase in inequality is just the benign outcome of "just desserts" as economist Greg Mankiw frames it. It may boost those at the top, but not at the expense of others. By this metric, not so. The growth of unequal outcomes has been and will continue to be costly to those on the wrong side of the divide. 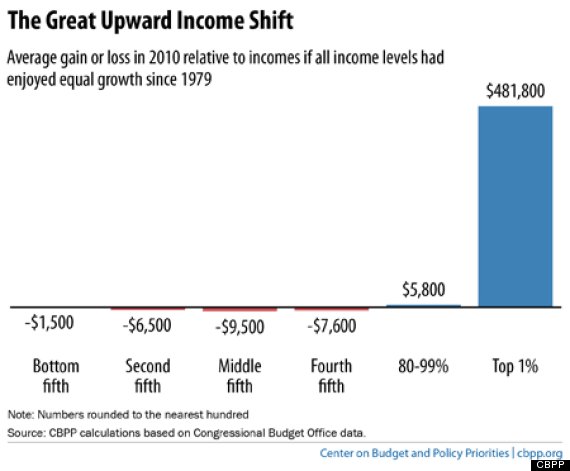