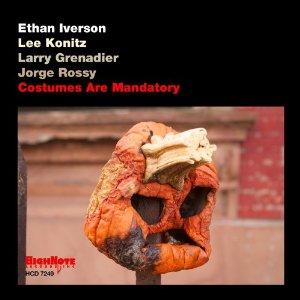 With a shriveled and charred pumpkin face on the cover (photo by Julie Worden) one might find the cover art of Costumes Are Mandatory holds a subliminal message. A worn out and used up octogenarian going through the paces of just another record gig. Ha! Dispel all such notions. This record finds the eighty-five year old alto-saxophonist Lee Konitz playing in top form with his signature dry-ice tone and his measured economy of notes that somehow speaks volumes. The taciturn Mr. Konitz speaks with his horn only when necessary and when he does one should be inclined to sit up and listen or risk missing fleeting brilliance. Here, the hearty Konitz, is joined by a stellar cast assembled by Ethan Iverson, of Bad Plus fame on piano. Larry Grenadier on bass and Jorge Rossy on drums, the formidable original rhythm section of Brad Mehldau's trio, round out the bill.

The record was the brainchild of Mr. Iverson and includes two Konitz originals, some standards and some of Mr. Iverson's original compositions.The album is book ended by two versions of Mr. Iverson's "Blueberry Ice Cream." Mr. Grenadier anchors this 12 bar blues with his full walking bass line over which, according to Mr. Iverson's liner notes, a reluctant Mr. Konitz plays his abstract, sparse blue lines to great effect and total enjoyment. On Mr. Konitz's "It's You," Mr. Iverson overdubs piano in an introductory nod to Lennie Tristano, Mr. Konitz's mentor. By his own admission, Iverson plays the piece in a Monk-like fashion. Konitz plays with a mute floating above a walking bass line by Grenadier and rambunctious interactive drum work by Rossy, something Tristano, who hated active drummers, would have undoubtedly scorned. Iverson and Konitz trace each others lines in a nice piece of synchronous interactive playing. On "317 East 32nd Street," the Tristano-style is most evident in Iverson's playing. Iverson claims Konitz begrudgingly plays this one, albeit gracefully. After so many repeat performances over the years perhaps he has found it difficult to say anything more?

The highlights of the album are the ballads, played with such minimalism as to be beautiful in their unabashed, almost stark nakedness. On "Try a Little Tenderness" Mr. Iverson's piano is probing, ruminative and abstract while still retaining some thread to the melody. Mr. Konitz again uses a mute on his horn creating a nostalgically shrouded sound. On Bob Haggart's "What's New," Iverson creates an angular lead-in for Konitz to enter the song with his own oblique approach to the melody. His brut champagne-like notes linger over the deliciously languid lines of this superb rhythm section, creating a marvel of concise, liquid inventiveness. The piece de resistance is the beautifully imagined duet of "Body and Soul" with Larry Grenadier's full-bodied bass playing the perfect foil to Lee Konitz's meandering alto. Grenadier's work is simply superb; a warm and round display of virtuosity and precision tone. Mr. Konitz's roaming sound is at its most delicate, allowing room for Mr. Grenadier's work to shine through. The last ballad is "My Old Flame" which features the eighty-five year old Mr. Konitz on a vocal scat that is quite unnerving. Following Mr. Grenadier's bass lines, Mr. Iverson's twangy piano string plucking and Mr. Rossy's consortium of muffled drum effects, in comes Mr. Konitz "do do do we" high-pitched scat. Gratefully he picks up his horn and renders a heartfelt solo that dances around the melody in his own inimitable way. Mr. Iverson and Mr. Grenadier both play sincere, poignant solos before Mr Konitz comes in again for a brief reprise.

Mr. Iverson and the trio, sans Mr. Konitz, are featured in much of the remainder of the album. On the Vincent Rose song "Blueberry Hill" a song made famous by Fats Domino in 1956, Mr. Iverson shows his creative juices are flowing, successfully deconstructing the rock and roll standby into a vehicle of musical abstraction and I might say surprising beauty. The Lennie Tristano/Paul Bley influence shines through on Mr. Iverson's "A Distant Bell" which is a note filled semi-free piece that couldn't be further from Mr. Konitz's style. "Bats" is Mr. Iverson's metronomic homage to the abstract pianist Lennie Tristano. The style is walking piano bass lines with floating drum rhythms by Mr. Rossy that seem to take the lead. "Mr. Bumi" is an homage to Japanese pianist Masabumi Kikuchi which has Mr. Grenadier, who plays arco here, trading lines with Mr. Iverson in an counter-intuitive exchange. "My New Lovers All Seem So Tame" finds Mr. Iverson plucking the strings of his piano in harpsichord-like manner; a strange song originally intended to be an intro to the following song "My Old Flame" which seems oddly out-of-place.

All in all Costumes Are Mandatory is a wonderful body of music that more than makes up for some of its rough spots by offering moments of unvarnished beauty from a marvelously supple group of musicians and magical playing by Mr. Konitz, a living legend of his craft.