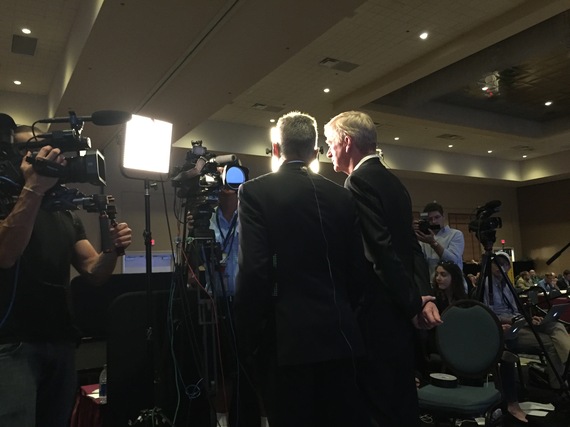 After a raucous national convention in Orlando over Memorial Day weekend, the country's third largest political party chose the first nominees of 2016: former New Mexico Governor Gary Johnson will run for president with the Libertarian Party as he did in 2012, and his vice-president candidate -- picked by Johnson, though nominated separately -- is former Massachusetts governor Bill Weld. Both men served two terms as Republicans in blue states and walked the libertarian line, exemplifying fiscally conservative and socially liberal practices. They believe in lower taxes and fewer economic regulations, but also feel government shouldn't interfere with personal issues like gay marriage, legal marijuana and a woman's right to choose. Johnson and Weld offer a (to borrow a phrase from this election season) YUGE alternative to the presumptive Republican nominee, businessman Donald Trump, as well as the Democrat's presumptive nominee, former Secretary of State Hillary Clinton, and could potentially be an electoral threat as well, as the party is on track to be on the ballot in all 50 states in November. While it's uncertain if they can win, they do offer voters a viable alternative to the amazingly unfavorable Trump and Clinton, along with a message the majority of Americans could possibly like. Their main challenge in the months ahead will be making sure voters know about them -- since its inception in December 1971, the Libertarian Party has never gotten more than 1 percent of the popular vote, with Johnson setting the high mark in 2012 with 1.3 million. If nothing else, Libertarians are hoping they can at least break that record in an "outsider" election year such as this one, as the electorate is hungry for something different.

The interesting thing is that this Libertarian "dream ticket" almost didn't happen. The Libertarian Party is an odd and beautiful assortment of gold-loving economists, LGBT community members, gun nuts, potheads, disenfranchised Republicans/Democrats and sometimes just crazy people. That's why if you saw coverage of the Libertarian National Convention, you would've noticed people dressed in plastic or rapping presidential candidates or even half-naked candidates for party chairman, as every libertarian likes to get creative with their freedom in their own way. To quote Charlie Earl, Ohio's Libertarian candidate for governor in 2014 (who was removed from the ballot thanks to failed presidential candidate John Kasich) the Libertarian Party is a "big tent party, but it's a circus tent." This means Libertarians are always divided between a pragmatic faction that wants to grow the party and a "pure" or "radical" faction, which mainly wants to spread libertarian philosophy. The latter almost derailed the Johnson/Weld ticket in fabulous fashion at the convention in Orlando, as neither of the governors won a majority of the delegates on the first ballots, but survived their opponents combining forces against them on the second ballots. That means the party's radical faction wanted to avoid becoming "Republican light" so badly that 500 delegates almost prevented millions of Americans from even having the option of Johnson and Weld, despite the possibility that the party could receive more votes, media attention and money than it ever has in four decades. It doesn't get much more anti-authority than that. And perhaps it was a good wake-up call for Johnson and Weld to not water down the libertarian message too much or take the Libertarians -- pragmatic and pure alike -- who have kept the party afloat for granted.

Of course, if someone is a true radical libertarian, what's the point of being in a political party at all? As comedian Doug Stanhope has pointed out, the ultimate libertarian election would be one where "no one votes" -- but that isn't going to happen anytime soon. Frankly, none of Johnson's top opponents were pure libertarians either -- media entrepreneur Austin Petersen was pro-life, but the party is pro-choice, and software magnate John McAfee was on something pure, but I think it was acid and it wasn't always clear what he was talking about (that being said, I still totally wanna hang out with the dude.) At the end of the day, as fun as it is to discuss libertarian philosophy all night, the average voter just needs a way to distinguish the Libertarian candidates from Trump and Clinton, and the "fiscally conservative and socially liberal" message is probably the best way to attract disenfranchised Republicans and Democrats. Johnson and Weld are the most realistic ticket the Libertarians could have run this year, despite the pure libertarian faction's gripe that the former governors were ever in government at all. Hopefully Libertarians will realize their goal of being a major political party with credible candidates is closer than ever, and can join together to turn those 1.3 million votes into tens of millions. Because if Johnson and Weld are the brains of the Libertarian Party this year, then the stripping chairman candidates, rapping doctors and drug-loving software magnates are its heart, and it'll need both to carry the party's message to voters who are hungry for an alternative to Republicans and Democrats. Hopefully Americans -- and Libertarians -- are ready.