Let's face it. "Do-gooders," whether they are journalists, novelists, scientists, human rights workers, doctors, lawyers or Mwami tribal chiefs, will be unable to save the Democratic Republic of Congo. There are a lot of good people who care about Congo, individuals who have absolutely no power whatsoever to change anything. If you are so inclined, undertake a year end review of humankind's ability to perpetrate evil. Spend a few minutes at the web address of Human Rights Watch, or even the Big News Congo page of the Huffington Post. I tried, but could not bear yet another glimpse into the bowels of hell and, even worse, have run out of words that could express outrage that might get the point across to people in power.

Hunched over the computer on Christmas night, I tried to come up with a summary of the year 2009 in Congo. It was impossible to face, so I made the conscious choice to be one of the "people with good intentions" who choose to do nothing, and chanced a drive through a Midwest blizzard to take my daughter to the movies. Serendipity provided the framework upon which to hang a discussion of atrocity and the malfeasance of people in power who choose to do nothing.

Here's hoping the road to hell is not paved with good intentions. 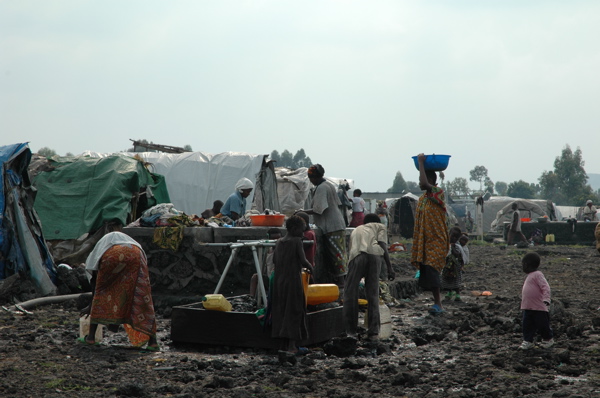 Let's suspend disbelief and suggest that what Congo needs is an Avatar. This suggestion is not made lightly. The world will never dispatch a savior who, like the paraplegic Marine Jake in the James Cameron epic, will damn self-serving interests to hell and decide to protect a unique world and complicated society -- a society he learns to value because of its inimitable qualities. The only real "unobtanium" in Congo is peace and a stable government that holds the interests of the Congolese close to its heart -- not the contraband a spiritually and resource bereft world obtains from raping the land and the people. That is, if governments are capable of acting in altruistic terms.

There are plenty of bad people and international special interests swarming all over Congo. They include American mercenaries who smuggle weapons on airlines, such as the Congolese airline Wimbi Dira (the CEO is an American), from Spain, North Korea, Ukraine, Iran, Libya, China, Belgium, Tanzania, the British Virgin Islands and others. Roman Catholic networks supplying money to a murderous Rwandan rebel group (FDLR), and exploitation of natural resources by just about every country on the planet, including China, the United States and the United Arab Emirates, round out the lists of the biggest of the bad guys.

Not to be left off the year-end worst list is the President of DRC, Joseph Kabila, who is allowing wanted war criminal Bosco Ntaganda to set up his own de-facto administration in eastern Congo. Ntaganda controls the mines and smuggling routes, aids and abets murder and torture of the innocent and, if investigations pan out, is in bed with big oil exploration in Virunga Park. Couple all of this with the United Nations' documentation of a clear linkage between the exploitation of natural resources and the financing of illegal armed groups, and it makes one wonder if the script for Avatar was taken directly from UN reports.

Surprisingly, to some, the bad guys list also includes scientists, conservationists, non-governmental organizations, doctors, lawyers, public relations professionals and just about anyone who stands to make a buck off of the suffering. As one local Congolese activist told me, "rape is big business in Congo these days."

So, what would happen if Secretary of State Hillary Clinton made good on her expressions of solidarity with the Congolese, and actually used her power to do something? She cried real tears and expressed sincere outrage when she met with women victims of rape and HIV/AIDS at Heal Africa while visiting the DRC as part of her seven-nation trip to Africa in August. Perhaps she needs to spend three months in a Congolese village, preferably one near the border with Rwanda. The transformation from cultural observer to participant in hell might cause her to dash aboard her State Department Boeing 757 and use it like Avatar Jake Scully used his magnificent Toruk bird of prey to establish authority and leadership. 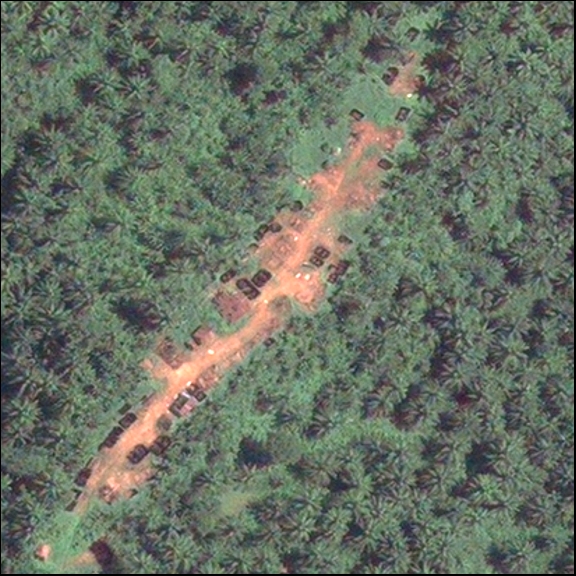 Satellite imagery of burned Busurungi area after attacks, courtesy of the American Association for the Advancement of Science.

After Photos © 2009 GeoEye/Produced by AAAS

Clinton announced more than 17 million dollars in new funding to prevent and respond to gender and sexual violence in the DRC, and she promised the deployment of a team of civilian experts, medical personnel and military engineers to assess how the US could further assist survivors of sexual violence. On top of that, Clinton promised a 3,000 member strong female police force to help empower women. None of this has materialized. Perhaps it is because Hillary, like Diogenes, is looking for one honest NGO in DRC to which she can direct funding.

The international press had barely left the country before Dr. Lyn Lusi of Heal Africa took to the UN airways and castigated Clinton, because Lusi felt that Heal Africa deserved the lion's share of funding.

Curious that Heal Africa would want to bite the hand that could possibly feed it.

Perhaps it is because Heal Africa, like many powerful non-governmental institutions in third world countries, is running rough-shod over grass-roots organizations. The big players have access and power that does not necessarily translate to an improved life for dispossessed Congolese. What good does it do to patch up fistula victims and send them back their villages where they risk being brutalized yet again? This cycle must stop. Perhaps SOS Clinton realizes this and that explains why she is keeping close tabs on the money. I would guess that Lusi's rant did not endear Heal Africa to the State Department.

If you don't believe that international "aid" and conservation organizations can do wrong, consider this well-circulated 2004 essay by Mac Chapin of World Watch. Chapin asks: "Can we protect natural habitats without abusing the people who live in them?"

Discussion of "natural" alliances between conservationists and indigenous peoples and the need to work closely with local communities, common just a few years ago, has largely disappeared. It has been displaced, in the biggest conservationist NGOs, by talk of changed priorities, with a new focus on large-scale conservation strategies and the importance of science, rather than social realities, in determining their agendas...coupled to all of this has been the partnering of conservationist organizations with multinational corporations--particularly in the businesses of gas and oil, pharmaceuticals, and mining--that are directly involved in pillaging and destroying forest areas owned by indigenous peoples. Complaints against the activities of the Big Three conservation NGOs have now been heard from Mexico, Guatemala, Peru, Ecuador, Venezuela, Guyana, Suriname, Papua New Guinea, and the Congo Basin, among others.

Perhaps SOS Clinton can use Avatar's Dr. Grace Augustine (Sigourney Weaver) as a role model. Grace likes "plants better than people," and is an expert on Avatar's fictional Pandora's Na'vi culture. But the facade is all bluff and as the story unfolds, we learn that Grace has a deep spiritual affinity for the indigenous Na'vi and gives the ultimate sacrifice of her life in their defense.

Would SOS Hillary sacrifice her role in the cautious Obama administration to actually affect some good? Clinton has more power than anyone at this point in history to do so. Certainly Obama is as ineffectual in world matters as he is at home. In the movie, Avatar, Weaver redeems her dismal and inaccurate portrayal of Dian Fossey in Gorillas in the Mists, for which she received an Academy Award nomination. She was so convincing in her fictional portrayal that many people in Rwanda and DRC confuse her with the real Dian Fossey. This is unfortunate and a travesty to Fossey's memory. Coincidentally, today, December 26, is the anniversary of Dian Fossey's murder on December 26, 1985. She was slain while she slept in her cabin at the Karisoke Research Center in Rwanda.

Myth has it that it was collusion between indigenous "poachers" which resulted in her death. In fact, in an echo of today's headlines coming from eastern Congo, it was more likely to be machinations between smugglers and the government of Rwanda.

Although she cannot be blamed for inaccuracies in the Gorillas in the Mists screenplay, Weaver truly aquits herself in Avatar.

In unscripted interviews, Weaver seems to have developed a better personal understanding of Dian Fossey and her fight not only for the future of the mountain gorilla, but African society as well.

It is not well known that Fossey broke with the "scientific community," including National Geographic Magazine, the African Wildlife Federation and the State Department when she realized the mountain gorillas would be used for tourism and monetary exploitation. In her final days, Fossey developed solidarity with indigenous populations of Batwa, Hutu and Tutsi, calling them the "backbone of Karisoke."

It will take a motivated, powerful individual to save Congo. The peacekeeping force of MONUC is certainly not up to the task. In a December 23 press release, Human Rights Watch called upon the United Nations to focus on protecting civilians. In a statement that sounds like a non-sequitur, HRW asked UN Secretary-General Ban Ki-moon to ensure "that the UN peacekeeping force in Congo focuses on protecting civilians and avoids supporting Congolese army operations that implicate peacekeepers in violations of the laws of war."

In line with this request, Human Rights Watch called on the secretary-general to urgently deploy an independent Civilian Protection Expert Group to eastern Congo to examine the implementation of MONUC's conditionality policy. Sending an expert group would be consistent with the UN Security Council Resolution 1894 to advance and ensure protection of civilians and the secretary-general's own recommendations from his March 2009 report to the UN Security Council, HRW said.

They should send an Avatar.