Scientists have for decades proposed mastering the elements to control the weather. But is tinkering with the Arctic Ocean -- the world's air conditioner -- by building a dam across the Bering Strait really a good idea?

Two years ago a science writer from the Netherlands proposed a radical solution to combat melting in the Arctic. In his "North Pole Rescue Plan," (PDF) Rolf Schuttenhelm suggests blocking the flow of water from the Bering Sea into the Arctic Ocean. He argues that this idea -- crazy as it sounds -- is worth exploring.

"Complete melting of the Arctic would be a great loss. Ecologically, and, why not mention, emotionally," Schuttenhelm wrote in 2008. "It is as wrong as it feels."

The entire region is experiencing rapid climate change, and scientists predict the Arctic Ocean may be ice-free during summer by 2030. Erosion now threatens 31 Alaska villages, and at least 12 of them are looking at relocating. Two of them -- Kivalina and Shishmaref -- are in the very waters, the Chukchi Sea, most impacted by Schuttenhelm's proposals.

Support journalism on The Last Frontier: Read AlaskaDispatch.com
These communities are losing ground and history to a warming Earth. Permafrost, the foundation on which their homes rest, is melting at an alarming rate. Coastlines are retreating, eaten and battered by sea waves. Buildings are buckling. Ground is sinking. And millions of dollars are being spent figuring out how best to save these communities. 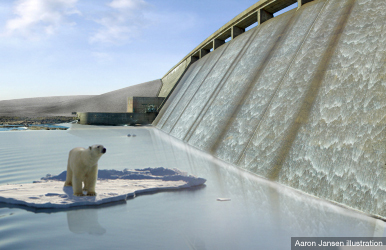 Meanwhile, the changing climate also threatens the Arctic Ocean's marine life. Both polar bears and walruses, for instance, need expanses of floating ice for hunting and migration. Increased warmth has made the Arctic a more dangerous place for people and wildlife alike. On Wednesday, the Obama administration announced it was designating an area of the Alaska Arctic larger than California as critical habitat for polar bears, which are listed as a threatened species because of the melting ice.

With so much at stake, the Dutchman argues that human society must take direct and extraordinary steps to reverse the warming trend and save the planet.

"I disagree with the conclusion we should not act -- out of human inertia," he wrote in his rescue plan. "The cost of inaction is enormous,"

Still, perhaps anticipating the public reaction to meddling with Mother Nature on such a scale, Schuttenhelm realized that it might be hard to tell whether blocking the gap between North America and Asia is an exercise in stupidity -- or one of simple genius. Acting rashly with too many unknowns wouldn't be wise, he acknowledged.

"Geo-engineering is an absolute fool's game," said Mark Serreze, director of the National Snow and Ice Data Center, in an interview Tuesday from his office in Boulder, Colo. "This idea that you are going to stop global warming in its tracks by protecting the Arctic is not realistic."

Yet Schuttenhelm is not the first to think damming the Bering merits further study. Decades ago, a Soviet engineer cobbled together a similar, if more elaborate, proposal aimed not at saving the Arctic's trademark chill, but eliminating it.

Read the rest of the story at AlaskaDispatch.com